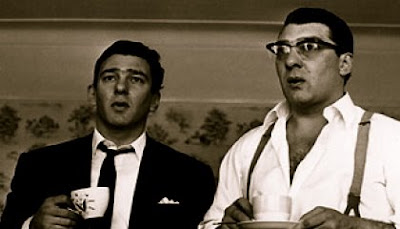 Our previous installment of Larry Winchester’s Pennzoil Award-nominated masterpiece left our adventurers Harvey, Dick and Daphne soaring wildly through the atmosphere in a runaway flying saucer...

But meanwhile, back on the ground, let’s see what’s going on with young Hope, the beautiful but scary daughter of rancher Big Jake Johnstone...

Oh, and what about good old Moloch, the even scarier leader of the local motorcycle gang, the Motorpsychos?

Return with us now if you will to a September night in that faraway year of 1969, to that land of enchantment called New Mexico, and to a town called Disdain...

Hope had felt left out when Dick and Daphne and Harvey and Enid and that English guy Eric or Derek had all piled into Enid’s truck and headed off for Paco’s. They hadn’t asked her to come, and she really couldn’t blame them. Her father would have had an absolute fit.

Not that she wanted to take peyote particularly; Hope had no need of drugs in order to alter her mind; her mind altered easily enough on its own, and often did, sometimes dozens of times a day. No, she simply wanted to be with Dick and Daphne.

She read some Lautréamont by candlelight and then she wrote in her journal in the private language she had invented at the age of four, and finally she decided to sneak out.

She changed into jeans and a t-shirt and her brother’s motorcycle jacket, pulled on a pair of boots and then tiptoed downstairs and went out to the stables.

She saddled up her black pony Whisper and then set off at a trot down the road to the Indian reservation.

Moloch felt as though his head were like to burst. It was a good feeling.

Moloch’s blood was aroar. He felt alive, gloriously so.

All around him in the cave his men snored and grunted in their swinish sleep.

He lurched up from where he had been sitting for hours by his fire and he stumbled over to an enormous stamped-iron sea chest. He knelt down, selected a key from a heavy chain attached to his belt, unlocked the padlock and lifted the lid. He parted the waterproof motorcycle cover which protected the contents and his heart swelled as he breathed in deeply that sacred odor of petrolatum and steel. For piled into the chest were all the weapons (and ammunition of course) that even the Motorpsychos durst not carry on their runs. These were for special occasions and emergencies only. Moloch had decided that tonight would be a special occasion.

Like a greedy housewife who has been let into a basement sale an hour before opening time he commenced lovingly to handle and fondle the grease-smeared weapons. Stout sturdy revolvers, lovely automatics, sawed-off shotguns and sub-machine guns. Lovely. There were even some grenades (both fragmentation and phosphorous).

He sat crosslegged on the ground, removed the gun from the shirt and laid the shirt out before him. He held the heavy weapon first in one hand and then the other, caressing it with his scarred and callused fingers. He stuck out his leathery tongue and slowly licked the length of the barrel (savoring that sui generis flavor of Cosmolined blue steel) and then he caressed his whiskered cheeks with it, feeling its divine metal hardness.

His breath quickening, his fingers trembling slightly, he set smartly to field stripping the pistol, laying its parts out onto the shirt. He then took from the chest a rag and a tin of kerosene and a cherrywood box of cleaning materials. He doused the rag and -- taking an occasional calming huff himself -- wiped the grease from the pistol’s components. He opened the wooden box, and with cleaning rod, patch, brush and swab he thoroughly cleaned each of the gun’s pieces and then re-lubricated each moving part.

He thumbed the barrel catch forward and broke the pistol open: the six clean empty chambers yawned hungrily at him.

He found a box of .380 cartridges, scrabbled it open and took one out. He paused for a moment, rolling the bullet between his thumb and finger, exulting in the death that pulsed quietly within this cold little drop of metal, and then manfully shoved it into the cylinder. He paused another long moment, then quickly loaded four more bullets. Five chambers filled. One -- the chamber of life, if you could call this fucking chaos life -- empty. He closed his one good eye and spun the cylinder twice, then snapped the weapon shut.

Keeping his eye closed tight, gape-mouthed demons screaming distantly at him from his own private hell, he pulled back the hammer to full cock and slid the muzzle into his mouth, the barrel sight running deliciously along the roof of his mouth.

His boyhood, his life, Eton, his military service, his years at Oxford, all the thousands of meaningless books he’d read, his marriage, his son (now also at buggery Eton the last he’d heard), his monographs on Rémy de Gourmont and Huysmans and James Branch Cabell and other wankers no one gave a flying toss about, his year teaching at Berkeley and his attendant decline and fall, it all meant nothing, nothing meant anything, all was only this horrible vile awareness of self, thrashing and pounding against the walls of one’s skull like a condemned prisoner in his cell.

He squeezed the trigger, the blackness yawned and howled, he knew a moment of ultimate falling pleasure.

(Click here for our next thrilling chapter. And please turn to the right hand side of this page for an exhaustive listing of links to all other extant episodes of Larry Winchester’s Railroad Train to Heaven™, a Sheldon Leonard Joint.)

Ladies and gentlemen: Gerry and the Pacemakers:

Gerry so rocks that song.

Brilliant, Larry. That Moloch sure does love himself a warm gun.

Thank God we live in a country where every citizen has the right to fondle arms.