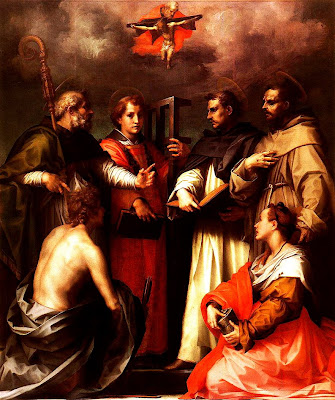 In our previous episode, Arnold Schnabel (“that mystic, that madman, that mooncalf, that majestical magic master of the modern memoir" -- Harold Bloom), having passed through a begrudging vetting from Peter the doorman, has been led by his personal lord and savior into the house of the latter’s father...

Jesus closed the door, then turned to me, shaking his head.

“That guy is too much,” he said. “Sometimes I think he’s looking for reasons to keep people out of here. I don’t know, almost two thousand years on the job. Just between you and me, I think he’s just a little burnt out.”

He shrugged, and gave me a little tap on the shoulder.

We were in a hallway or large foyer, with faded floral wallpaper, a few small tables, a couple of umbrella stands, a few hat racks and coat stands. But no umbrellas, no hats, no coats.

We came out into a large Victorian living room, floored with a dull parquet, worn Persian rugs (or Persian-style, what did I know?), lots of brocaded armchairs and sofas dressed with antimacassars and multicolored pillows, tasseled table lamps, a large chandelier overhead, and a grandfather clock, stopped.

None of the lights were on, but a rippled soft light came through tall stained-glass windows.

He went over to a low coffee table by the largest sofa, and picked up an ormolu cigarette box and opened it.

“I don’t believe it,” he said. He showed the black inside of the box. “Empty.”

“This box is supposed to be kept filled at all times.”

“Okay. My old man will have some smokes in his office.”

“Really, it’s okay,” I said, for what felt like the eleventh time.

He led me across the room to a hallway, a long and wide hallway, down which we went.

“Maybe someday your picture will be on this wall,” said Jesus.

“That’s what Saint Augustine of Hippo said,” he said, nodding toward a portrait presumably of that doctor of the church. “Oh, hey.”

He stopped at a small table that had a carved ivory cigarette box sitting on it. He opened the box.

We walked down the long hall for several minutes, then came to another large room, even larger than the first room, but more sparsely furnished and considerably darker.

We walked across the enormous room. My leg was bothering me, especially what with walking barefoot on these hard parquet floors.

Jesus glanced over at me.

“I’m sorry, this place is just too big.”

On the other side of the room was a wide, winding, carpeted staircase, and up we went.

On the second floor we went down another hall, this one with no paintings but lots of statues, of saints and the holy family and the various members of the holy trinity.
Which reminded me.

“Is the Holy Ghost here?”

He stopped for a moment and looked at me.

We turned into yet another hallway, this one with only an occasional painting, along with a few small tables with vases on them, but no flowers, and at last we came to a large and sturdy-looking door.

“Oh. Well, just be yourself, Arnold.”

“No, about being myself.”

He looked at me, nodding his head very slightly.

“Okay. Look, let me just go in and let him know you’re here first. Do you mind waiting just a minute?”

I wondered if I had a choice about this either, but I said, “No, not at all.”

He turned the doorknob, and, without knocking, he opened the door and went in. I didn’t want to seem nosy, and so I looked away as he did so. I heard the door close behind him, and I stood there, waiting.

My leg was hurting. There was a chair way down the hall, but it seemed prohibitively far. And after all, he had said he’d only be a minute.

Five minutes passed. And nothing.

I put my ear against the door, it was a big old carved wooden door. I couldn’t hear a thing.

I waited a few more minutes, and now I had to go to the bathroom.

A couple more minutes. I really had to go now.

I went off down the hall. I came to a door, and I tried the knob. It was unlocked. I opened it.

It was a large office and a man sat behind a desk. He looked up from some papers.

“Down the hall, then left, make the first right, you’ll see one two doors down. On the right. Okay?”

I quickly started to back myself out. Despite whatever Jesus had said, I felt very self-conscious standing there in my swimming trunks, barefoot.

“Down the hall, left, then right, two doors down.”

But which way down the hall?

I kind of hated to do it, but I decided to go left, farther away from where I had come.

(Continued here. Be so kind as to look to the right side of this page for a complete and up-to-date listing of links to Arnold Schnabel's Railroad Train to Heaven™. A Mickey Most Production.)

The Mindbenders do it in one minute and fifty-five seconds:

Even in the Big Guy's house, ya still can't find the can.

Another episode like this and I'll be spending Sunday mornings at St. Peter's Roman Catholic Church.

This is as real as it gets. First, however,I'm going to need Father Reilly's ear, or better yet, Jesus's. Otherwise, the die-hards might burn me at the stake.

So where is the Holy Ghost? On the road or just taking a day off?

Kathleen, I'll save you a spot at nine o'clock mass next Sunday, second pew from the rear.

Manny, that's a damned good question: where the hell is the Holy Ghost? I mean, for being one-third of the Holy Trinity he seems to get precious little credit.

I wonder at what point God decided to stop updating the decor? There comes a time for everyone... even God I suppose.

Jen, I think God re-decorates about as often as I do.