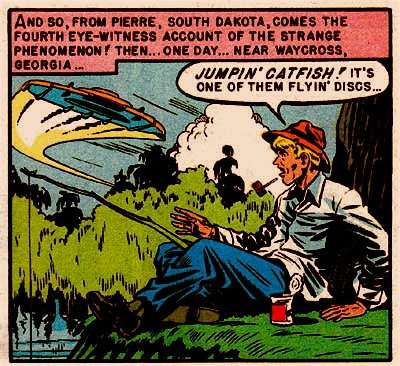 Previously in our serialization of this “sprawling, dare I say rollicking” (Harold Bloom) epic, our plucky heroine Daphne Ridpath pressed a certain button on the command console of a certain flying saucer...

Oh, but what about Lefty Schiessen, in the midst of an extraordinary contest over at the Ira Hayes Memorial Athletic Field, in a small and depressed New Mexican town called Disdain?

It was the twenty-third inning and Lefty was at bat. He still had his perfect game going. And he still felt in the zone, but the other guys on the team were getting sloppier out there in the field. Guys were passing joints on the bench, and everybody was drinking Big Jake’s beer; Lefty had drunk a can of Tree Frog himself while waiting for his at-bat.

So: two outs, nobody on.

Lefty was going to look for his pitch and try to pull one out and get this motherfucker over with.

The guy pitching was the sixth Twins pitcher. Their manager had taken the starter out after the ninth despite his shut-out, not wanting to endanger the kid’s arm in what was after all a meaningless game.

Lefty would wait on something low and away, something he could pull into the right field stands.

First pitch was a piece of crap that bounced off the plate. Ball one.

Next pitch came right down the pike, high and hard. Lefty twitched and raised his right foot, but then took the strike. One and one.

Next, a curve ball inside. Two balls, one strike.

Then another curve, damn nice pitch on the low inside, and Lefty followed it in and could have knocked it hard for a single to left, but he let it go by. Two balls, two strikes.

Next pitch should have been another curve, or a slider, but Lefty figured the guy would try to fool him with a fastball, and he saw this one all the way like it was slow-motion, hard and coming in low just where he wanted it, and he swung smooth and met it hard but he knew as soon as he hit it he was just a fraction too high on the ball and he could tell it was going to land in right center, oh well, maybe it would fall in for a double, but just as he finished his swing this great big glowing green thing swooped over his head and out toward center, and the ball suddenly swerved away from the right and followed the green thing, up and over the center field bleachers, and off and up into the sky, and then all the lights in the stadium went out as if some giant had blown out the candles of a giant birthday cake.

Everyone looked up and watched the baseball disappear, and you could see this green thing zooming up and away and getting smaller and smaller, and then it seemed like a section of the starry sky just got blacked out, and the green thing zoomed into the black space and vanished.

Then the black space vanished, and all you could see was the night sky, the stars, some wispy grey clouds.

The only lights in the ballpark were the tiny red pinpoints of the cigarettes and cigars and reefers of the people in the stands and the players and coaches in the dugouts.

Lefty dropped his bat and trotted down through the darkness toward first base.

He had his perfect game now, and the sound of his spikes hitting the dirt resounded throughout the otherwise silent ballpark.

Just terrific. Because whereas before we were flying all over the place but still staying rather close to the earth, well, now we seem to be just zipping off at a slight angle but basically right up into space at this absolutely dizzying speed, I mean just shooting along, and there on the big screen in front of me I see the earth getting smaller and smaller by the second.

But just when I thought this was the absolute limit I notice this funny smell, and I turn around and now there’s this awful sort of green steamy smoke coming out of the grill I had just peed into...

I mean it’s just one thing after another!

(Go here for our next exciting chapter. And kindly turn to the right hand side of this page for an up-to-date listing of links to all extant episodes of Larry Winchester’s A Town Called Disdain™, a Max Fleischer Production.)

Woo-hoo, Lefty. I bet he, like Dock Ellis and in the abstract, George Carlin, was a man of many hats. And then, of course, Daphne owned a hat shop in Saigon. Unless...I'm wrong.

Glad to see Lefty still has his MoJo working. I wonder how his pitching arm is going to feel after the LSD wears off.

Way to go, Kathleen, you remembered the hat shop which was only mentioned (once), like 95 episodes ago!

Well, Tedster, at least lefty's got his perfect game to look back on...