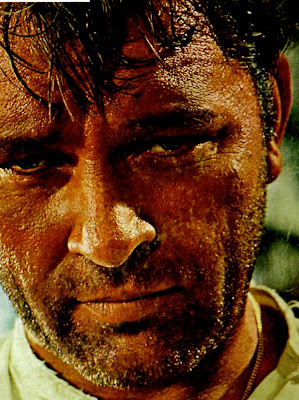 Larry Winchester, never one to leave a plot thread untended for more than three or four months, now returns to the ongoing strange sagas of Lefty Schiessen -- living-legend minor-league fastballer and acid-head, still pitching a perfect game as it extends into the high double-digit innings -- and Doc Goldwasser, the sole general practitioner in a town called Disdain...

The word of Lefty’s game had spread throughout the district, and the sunbleached sagging stands were almost full with drunken shouting people.

Doc Goldwasser had seen the lights of the Pat Garrett Athletic Field glowing unusually late against the nighttime sky as he drove back into town, and he also had stopped by to watch the game.

He sat in the dugout next to the Skipper. The Doc knew all the Browns well. If he wasn’t stitching up somebody’s calf after a spiking, or pumping liquor and drugs out of another one’s stomach after an OD, then he was writing someone a prescription for delaudid or pantopon or demerol or eukuodal or some other addictive drug. Half the guys on this club were hooked on dope, and the Doc didn’t have the heart to turn them down. Besides, the way the Doc figured it, if they didn’t get their drugs through him then they would get it from the Motorpsychos, who were notorious for cutting their product with formaldehyde, bleach, rat poison, Drano, and even Agent Orange.


The Doc had to admit he was almost enjoying watching the game. In his younger days he had loved to go to sporting events, but, after the war, sport became just one more of the many things -- like sex, like food, like wine, like any sort of physical exercise -- that he just didn’t give a fuck about any more. But now, at least during the moments when Lefty was on the mound, he could feel a faint echo of a certain joy he had felt long ago, sitting high in the bleachers at Shibe Park or Baker Bowl with some other Penn Med students, eating hot dogs and soft pretzels and drinking warm Ortlieb’s beer out of paper cups amidst the smells of sweat and cheap perfume and cigars and cigarettes, with the car exhaust and the smoke from the factories drifting up over the cool damp brick walls of the stadium from the dirty brown city outside; and down below, like a glimpse into another and better world, the bright sundrenched vivid green of the field.

Another epiphanous moment in a day that had already had two or three of them, which was two or three more than his days usually held -- Enid’s moist breasts in the coffee shop, the tinkling of her bracelets as she stirred his coffee, and her kind eyes; and Hope’s eyes, her disturbingly knowing dark eyes; and something else, a feeling that seemed somehow retroactively to have run through this whole day, something he couldn’t name. But so what. In the Doc’s admittedly sparse personal experience with epiphanies, they came and then they went and they left you hanging there the same pathetic son of a bitch you were before, if not worse. Like sex, like opium, the spiritual epiphany, like the human body, like life, was not built to last. He had learned this simple fact a long time ago at Omaha Beach, after those few blissful moments of discorporation, floating serenely above the carnage, when he had somehow been dumped back into his body and into the shit again.

There was only one epiphany you could count on, and that was junk, that brief but reliable dose of sweet nothingness.


And here came Big Jake, that epiphany of the non-epiphany, walking along inside the third base line with two sixpacks of Tree Frog beer under each arm and a stogie in his mouth. He came on over, heaved himself down into the dugout, shambled past the indifferent players and squeezed his fat ass in between the Doc and the Skipper before the Doc could work up the energy to get up and escape.

(Click here for our next exciting chapter. And kindly turn to the right hand side of this page for an up-to-date listing of links to many other fine episodes of Larry Winchester’s A Town Called Disdain™, now certified by the Commissariat of Homeland Insecurity as an Approved Patriotic Historical Epic.)


Gimme that burger with some green onions, baby:

I think back in the 60's all of the major league ballplayers were on amphetemines, or "greenies" as Jim Bouton called them in "Ball Four". As far flung as Disdain's ball club seems to be, their recreational drug habits aren't far from the truth.

I don't mean to sound racist, but it's difficult to believe that half of Booker T and the MG's, the house band for Stax Records, were caucasion. I always grooved on "Time is Tight".

I'm missing something here. But then I don't go to baseball games without a good book to read. Manny, who at age 11 watched the entirety of a 22 inning Cubs game, will explain this to me. But then he has tried to show me the light many times before--seems even we can't share our epiphanies.

Ted, you know your baseball history, although it seems the Disdain Browns were a little more into the downers than the uppers. But, after all, they were stuck in a town called Disdain.

I guess Booker T and MGs were proof that soul is color-blind. What a band.

Kathleen, you're certainly not the only one who's immune to the epiphanies of baseball. (You heretic, you.)

You know all those cooking Aretha and W.Pickett hits like "Chain of Fools" and "Mustang Sally"? Every single session musician on those recordings except for the background singers was white! Hard to believe but true. Just goes to show you how irrelevant skin color is. Go Barack!

Just one of the sublime things about music is how it rises above race, ethnic background, nationality.

I like Doc. That is just the loveliest description of enjoying a baseball game in summer.
Speaking of acid head pitchers, anyone remember Dock Ellis of the Pittsburgh Pirates?
http://www.sirbacon.org/4membersonly/docellis.htm

But you probably knew that.

I didn't know that, but I'm not surprised.
I have a great Dock Ellis story for you: In the summer of 1969 my buddy Joe and I were stuck in remedial summer school, but it got out each day just in time for us to go to Wrigley Field and see a Cubs game. We used to sit in the bleachers and taunt the other teams' players. When the Pirates came to town, and we were shouting at Dock Ellis during the pre-game warm-up, he looked up at us and said he liked my friend's hat--a "Billy Jack" black hat--and asked if he could wear it. So Joe tossed it down to him (it flew like a frisbee), and Dock wore it around the outfield. Just before the game started, he threw it back to us.
We were (and are) Dock Ellis fans for life.

Manny, that is one great story.

And I goddam love the "Billy Jack" hat.