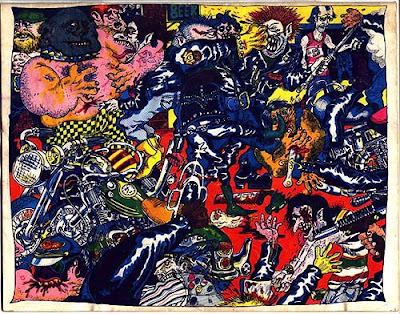 Having recently had our literary license renewed for yet another year by the Commissariat of Homeland Insecurity, we continue our serialization of this first-ever publication of the complete “director’s cut” of Larry Winchester’s long-out of print masterpiece:

The time: a night in September in the alleged year of our Lord 1969.

The place: a foul cave in the wasted hills a dozen or so miles across the desert from a town called Disdain.
Moloch, the erudite leader of the outlaw Motorpsychos gang, has loaded five bullets into a six-shot Webley revolver, spun the cylinder twice, closed his one good eye, shoved the muzzle of the pistol voluptuously into his mouth, and pulled the trigger...

He slipped the muzzle gently out of his mouth, the knife-edged sight once again running teasingly along his acarified palate, and he opened his eye.

The world was still there and so was he, the both of them as vile as ever.


Moloch had got through a year in Korea without shooting this pistol or any other weapon at anyone. A year of war, and he never fired a shot. Never hurt a fly. What a waste of time. Why join the Royal Marines if you weren’t going to kill anyone?

Moloch had reviled all the peace-and-love nonsense of the last couple of years, but what really had any of that nonsense meant? People were still massacring one another wantonly, in Vietnam, in Biafra, in the houses of the rich and beautiful in the Hollywood hills, the letting of blood would never end, not until the last Cain killed the final Abel, and good riddance to bad rubbish.

Moloch had always wanted to go on a real rampage, and now, tonight, he and his worthless crew of scum would ride, and they would kill. And any of those wretches in his band who refused to kill he would shoot out of hand; but he sincerely hoped this would not prove necessary, at least not until he found Ridpath.

Ridpath must be the first.

And then, and then -- Moloch fully intended to make Attila the Hun look like a prancing wog poofter.

He broke the pistol open again and loaded the empty chamber.

“Men,” said Moloch, after he had kicked the motorcyclists awake and assembled them before him, the lot of them ugly, cross and fearful in the faltering half-light of the half-dead fires, “tonight we ride out to avenge the death of our dear departed comrade Crackle.”

A few halfhearted huzzahs croaked forth from the rabble. (Moloch’s actual thought was, To hell with bloody Crackle. Ridpath had shot him courageously in self-defense, and moreover Crackle had been monumentally boring and he stank like a sewer; when they had immolated him with gasoline the other night the stench had been so nauseating that even the most unhygienic of the band had shifted upwind.)

Moloch proceeded to extemporize a half-hour dithyramb, liberally sprinkled with quotations from Shakespeare, Milton, and Crabbe.

“Eventually no doubt we shall all be killed. But until that final moment we will live as men were meant to live. Riding and killing, taking, raping, destroying, devouring -- and wanking off into the face of eternity.

“Eventually, yes, death, as it must, will take us too into its stinking maw -- but not without a damned good cracking battle first!

“Gentlemen --” he swept a hand in the direction of the open sea chest full of firearms -- ”there are your weapons. Take them. Clean them well and then load them. Pack yourselves plenty of ammunition, and in the words of the immortal bard --

Be copy now to men of grosser blood,
And teach them how to war.

“For tonight -- we few, we happy few, we band of brothers -- tonight we ride. Tonight we kill.”

The men were silent. Most of what Moloch had said had gone past most of them, some of them had even dozed off occasionally, but the general purport of his speech, that they were now officially at war with the rest of humanity, had by now penetrated into even the thickest of their skulls.

Moloch held the Webley across his chest, caressing the barrel with the gnarled fingers of his left hand.

“Huzzah,” croaked Testicle, his voice quiet and hollow in the shadowed cave, a thick tear like a drop of axle grease coursing slowly down his pitted cheek and into his beard.

Another stout fellow cleared his throat and then repeated the cry:

And another man, louder now:

And yet another yet louder still:

And then a coarse ragged chorus:

Moloch raised his weapon high like a sceptre and held it there.

Truth to tell, Moloch knew that if he had cried “To beer!” or even “To life!” these fools would have echoed him with the same enthusiasm. Like the vast majority of humanity they were born followers, and so they would die. To hell with them. Let them serve their purpose and then to bloody hell with the lot of them.

The narrow ends of Moloch’s scarred lips stretched briefly for a millimeter in each direction.

Tonight would be a good night.

(Kindly go here for our next exciting adventure. And please turn to the right hand side of this page for an up-to-date listing of links to all extant episodes of Larry Winchester’s A Town Called Disdain™, Second Place Prize-Winner of the Turtle Wax Award for Excellence in Epic or Picaresque Literature.)

A combination of Mel Brooks, "Deer Hunter" and Sonny Barger. What happened to the flying saucer?

Moloch for all his education, evil, and lust, not so much for blood as for the guns themselves, might be the least of Dick's problem's right now.

The video's for Manny? I'm sure he'll love it. These past few months he keeps asking, "Why can't you be more like Carla Bruni, Kathleen?"
Too bad I haven't a clue what he means.

Tedster, as far as we know the flying saucer is still zipping wildly through the atmosphere, but don't worry because the lovely Daphne is at the controls -- or, wait, maybe we should be worried. Anyway, Larry will get back to her. Eventually.

Kathleen, yeah, as long as Dick's in that spaceship with Daphne steering it, he really doesn't have to worry about Moloch.

Thanks Dan, that was just what I needed.
Vive la France, as I always say.
Hard to believe a creature like Anna Karina walks the same earth as Moloch.
Please don't let them meet.

Manny, if Anna ever met Moloch she would just bat those eyelashes once and he would melt like the Wicked Witch of the West.