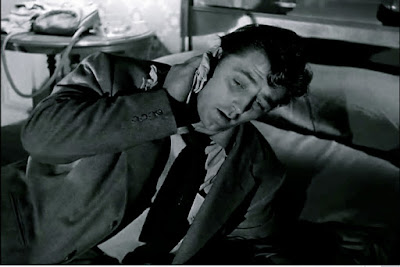 In our previous episode our hero Buddy Best dropped everything, flew to Milwaukee on a cold and rainy night, and rescued his daughter Liz from an abusive and drunken lout of a boyfriend. Now he really needs a drink...

(Click here to go the first chapter of this “shameless sudser of the seamy shenanigans of a Tinseltown hack” -- J.J. Hunsecker, in The Reader’s Digest.)

By the time Buddy got Craig and his stuff in a cab and had talked down Liz and got her to bed it was eleven o’clock and he needed a real drink, or drinks, so he looked for and found Liz’s keys and went next door to The Nomad and ordered a Rebel Yell on the rocks. He wanted a good beer and the bartender recommended a Michigan microbrew called Two-Headed Ale or Two-Hearted Ale, whatever, it was good. And because he really wanted them he bought a pack of cigarettes, Lucky Strikes, the unfiltered kind.

He called Marlene’s cell number on his cell.

“Watching a Jennifer Lopez movie because I have no life. How’s Liz?”

“She’ll be better. Listen, baby, do me a solid, get me a flight back to L.A. tomorrow, for two, for me and Liz. First class this time. And straight through. Any time after about noon.”

“What happened? Is Liz in trouble?”

“Shouldn’t you be with Liz?”

“Well finish your drink and go be with your daughter, man.”

“Thanks, call me tomorrow but don’t call me early.”

Buddy folded up the phone and picked up his bourbon.

This was a woman sitting to his right. She had a friend with her and they were both looking at him.

“She goes to school here?”

She wasn’t bad looking. They were both about thirty-five or so. Neither were bad looking really. (Just a couple of battle-hardened old campaigners who had been to hell and back and were cheerfully ready to go there again.) Which wasn’t to say they were great looking. But then again Buddy knew he wasn’t any box of chocolates either. They were drinking hefeweisse out of those tall glasses, with lemon wedges floating in the beer, bar Trend # 6031.

“I write and produce movies.”

“Oh my God, I knew it! Carol, doesn’t he look like a movie producer?”

“I don’t know if that’s a good thing,” said Buddy, and the women laughed.

Buddy chatted with the women. They were outgoing but dull, he was charming. He backed them up and got himself another beer. After a while the other woman went to the head and the first woman, whose name Buddy had been told but which he’d forgotten, put her hand on his thigh.

“I notice you’re not wearing a wedding ring, Buddy, but I do think I see the faint trace of one on your ring finger.”

She touched the thin white trace with her own finger.

“What happened to it?”

“To tell the truth I gave it away a couple weeks ago.”

(True story: walking home from Café des Imbéciles on the night Joan had told him she was leaving him, he had given the ring to a panhandler on Hollywood Boulevard.)

“Because my wife left me. For her acting teacher.”

Now she had her hand on him and it was getting hard. That was a good feeling, but. But, to tell the truth, even if he didn’t have to get back to his daughter, he just wasn’t interested. What up with that? When you’re young you don’t give a damn, you’ll do anything with a hole in it, then you get old and you start getting picky all of a sudden, you think about all the boring talk you’ll have to put up with, hers and yours, and, well, anyway, besides...

What the fuck was her name?

She kissed his cheek lightly.

“I really can’t do anything tonight. I have to get back to my daughter.”

****
Buddy sacked out on the couch and got less than a half-decent night’s sleep. He could hear the rain and the wind outside, and he was weirdly aware of not being in his own bed, of being in Milwaukee in his daughter’s apartment which smelled like cigarettes and beer, of the fact that his daughter was passed out in the bedroom, of the fact that he’d have to deal with her problem, her problems, his own problems. But it all could be worse. He didn’t have cancer, she didn’t have cancer. He could deal with this, he only wished he was in a comfortable bed and that he could sleep. And finally his brain ran out of gas and he did sleep.


He got up at around nine, feeling physically crappy and very hungry. He checked in on Liz. She was still sleeping, and he let her sleep. He left her a note on the toilet seat, then he got an umbrella out of a closet and went out for breakfast. He walked around in the wind and the rain for a bit. The streets were nearly empty. He found a little bohemian coffee shop that served food. Even Milwaukee had its bohemians. There was a fortyish guy with a beard and ponytail nursing coffee, and sketching, and rolling his own cigarettes, the same guy you saw in every bohemian coffee shop. Outside it was still raining. It looked like a seaport town. Presumably there was a great lake somewhere nearby.

Buddy ate yogurt and fruit, an omelet and two muffins, and read the paper. Private Jessica Lynch had been reunited with her family. And back in L.A. you just knew that assholes were falling all over themselves trying to get the movie rights to that one.

His cellphone rang, it was Marlene:

“So is she going back into rehab?”

Buddy went over to the counter and refilled his cup from a big jug, and as he was going back to his table the bohemian guy asked him if he wanted to play a game of chess. Buddy thanked the guy for the offer but said he didn’t play. Actually Buddy did play chess although he wasn’t crazy about the game. He just didn’t feel like playing chess now and with this dude. He went back to his table but now that the coffee-shop ice had been broken the guy began talking to Buddy, across two empty tables. Okay, thought Buddy, here it fucking comes. And, after a few false starts or feints which Buddy did his best to barely acknowledge, it came: in a flat and nasal midwestern tenor that reminded Buddy of stale chewing gum, the dude launched and held forth, on his unremarkable life, his conspiracy theories, his modified zen philosophy, and his wish to see a bloody revolution; and as he droned on Buddy looked past him at the rainy and windy and mostly empty street. This was the middle of the country but it felt like the edge of the world.

(Can things get any more depressing for Buddy? Go to our next chapter to find out. Kindly look to the right hand column of this page to find a listing of links to all other published chapters of Uncle Buddy’s House™, as seen on The Dick Powell Theatre (retitled A Word to the Wisenheimer), starring Robert Mitchum as Buddy, and Red Buttons as The Bohemian Guy. Adapted and Directed by Larry Winchester. A Four Star Production.)

Poor exhausted Buddy.He breezes along, wry and moody.
Wonderfully atmospheric and such a nice pace.

Even if the sun were shining, Buddy would be blue.

Ah, well, soon Buddy and Liz will be back in sunny California. Let's just hope there's not an earthquake waiting for them there.

Get any worse? He's going to travel first class and treat his daughter to the same. He didn't even have to negotiate it himself. He's got people falling over themselves to help him.

Could be much worse.

He's lucky people want to befriend him. He should be ashamed of himself for judging them by their looks and their accents.

He can afford a drinks in a warm bar and a good American breakfast - many people can't.

It's time Buddy had a hard cold look at himself - in my crusty, end of another cold day, when the hell is Spring coming to SW Australia opinion.

Some excellent hardnosed observations from you, Di, and keep 'em comin',

It's all talk. I'm soft as butter really.

I like the way Buddy protects his daughter. Redeems him in my eyes, but he must'nt let her down now!

Aw, Di, I know you're a buttercup!

Although I cringed when I read this, I have to admit, it's a great description. You nail it perfectly. And now I'm gonna record myself on my MAC to see if I sound that way! Dear Lord, I hope not....

Heh heh. Relax, Beege, your speaking voice is fine. Almost as fine as your singing voice!

I've been working on a little project most of the day. You'll hear it soon, my friend! Hopefully. If I can figure out this damn editing thing....lol

I wait with bated breath, Beege!

(But -- are you going to sing in a Cleveland accent?)