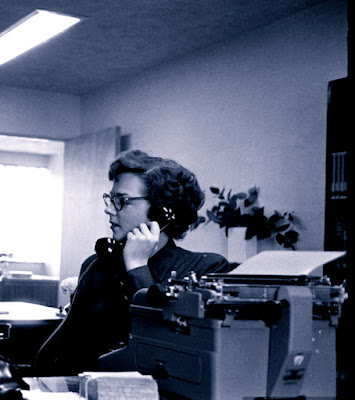 On the domestic front, our hero Buddy Best’s wife has left him, and his son has moved back home after losing his job and breaking up with his own wife; Buddy has also had to deal with a spot of school trouble concerning his stepdaughter Deirdre, and he has received a disquieting phone call from his former wife. However, Buddy’s career as a B-movie auteur continues...


(Click here to go to the preceding episode; latecomers may go here for the beginning of this “seedy epic of modern-day Hollywood” -- J.J. Hunsecker, nationally syndicated columnist.)

Down in Culver City next day they screened Iggy’s first rough cut of Triggerwoman II.

Everyone was quiet after the lights came up. Iggy was sitting between their editor Maxine and their composer Lenny, two rows in front of where Harvey and Buddy and Debbie Greenberg and Heather all sat together. Iggy turned around.

Fucking Iggy, he’d taken only a slightly-better-than-average Harvey/Buddy script and somehow made something original and good out of it, the little prick.

“Except for the Ancient Mariner,” said Heather, and then she looked a little abashed because she’d mentioned the bad actor who’d stolen Buddy’s wife. “Well, anyway, this is the best thing we’ve ever done.”

“Let’s go have lunch,” said Harvey. “We need to talk about this. What about Mi Ranchito?”


They rendezvoused at the Sagebrush Restaurant and Bar because it was nearby and because there was a chance they could get a big table on the patio where they could smoke. They accomplished this and ordered some drinks.

“Guys,” said Heather, “we can’t just toss this one out there.”

“Just what I was thinking, Heather,” said Buddy.

“What, it’s that good?” said Iggy. He was tired, he’d been up all night in the editing room, and out here in the L.A. daylight he looked pale and you could see the circles under his eyes. Maxine the editor always looked that way. She was an old vet who’d worked at Columbia for about a hundred years and she didn’t say much.

Today had been Lenny’s first exposure to the movie. He hadn’t even read the script.

“Is great.” Lenny was from Russia, or from Odessa, anyway, if that was still part of Russia. “Is definitely not your usual shit. Is a like a cross between Jean-Pierre Melville and Sergio Sollima. But definitely modern; Iggy, you got your own style now.”

Not everyone there caught the Melville and Sollima references, but anyway --

“So, you got any ideas, comrade?” said Buddy.

“Oh, yeah, already I got ideas, but the ideas I got I gonna need a bigger music budget.”

“Can’t you just use a synthesizer, Lenny? You know, samples?” said Debbie.

“Sure we can, but then it sound like shit. You want it sound good, you get real fucking musicians.”

“Maybe we can get some more money from Sony,” said Buddy, although that would be a first. (A subdivision of Sony financed Harvey and Buddy‘s pictures with pre-sales for the overseas theatrical rights.)

“We should take it to the festivals,” said Heather. “Do you think we could get Sony to take it to Cannes?”

“Well,” said Harvey, “we could still maybe show it at Cannes, even if it’s not in competition.”

“It’s like mid-May,” said Debbie. “I think you gotta have your print in on like the tenth of May.”

“All right, all right, we’re getting ahead of ourselves a little here,” said Buddy.

“But, Buddy,” said Heather, “this is not just another straight-to-video piece of shit, we gotta get the word out on it and get it into the theatres, and I mean domestic theatres, art houses, platform it --”

“We meet with Sony Wednesday,” said Deb. She put her hand on Buddy’s thigh.

“You guys have to convince them,” said Heather.

Now Debbie was lightly stroking Buddy’s thigh. What up with that?

The handsome waiter was there, laying out the drinks.

Old Maxine just sat there smoking a cigarette. She didn’t get excited by much.

“I know you can,” said Harvey. “All right, look, Lenny, get to work, don’t worry about the budget right now, work with Iggy and write the score you want to write, we’ll see about the budget later.”

“You wanta save money on the music budget, lose the piece-of-shit rock songs,” said Lenny.

“I wouldn’t mind that,” said Buddy. He gently removed Debbie’s hand from his thigh, but he gave it a little squeeze before letting it go, just to show he wasn’t a complete asshole. “What do you think, Ig?”

“I am so over piece-of-shit rock songs on the track,” said Iggy.

The waiter stood there smiling with his pad on the back of his cocktail tray.

“All right,” said Harvey, “let’s order and we’ll talk. I shouldn’t but I’m gonna have the meatloaf.”

“If only the fucking Mariner wasn’t in it!”

Buddy’s cellphone started buzzing away in his pocket. He took it out, and because it was his home number he flipped the phone open.

“Dad, call Liz, she’s freaking out or something.”

“All right, give me her number.”

“You don’t know her number?”

“You need to learn how to program your cellphone, dude.”

Buddy went out onto the sidewalk to make the call.

“What did Philip tell you?”

“He said you were freaking out.”

“I am not freaking out.”

“You sound freaked out.”

A male voice in the background told her to get off the fucking phone.

Buddy didn’t say anything; a long second passed by.

Then the background voice yelled for her to hang the fucking phone up.

“I’ll be there tonight.”

She or someone else hung up the phone.

Buddy stood there for half a minute and then he called the office and asked Marlene to get him on the soonest flight out to Milwaukee.

“Why are you going to Milwaukee?”

“I only asked a civil question.”

Buddy took a breath, then let it out slowly.

This was Buddy. He hated to fly and if he had to fly he flew first class, preferably with no connecting flights, and with as many drinks as he could possibly cajole from the flight attendants, supplemented often with tranquilizers he would bum from friends.

“No, just get me the first flight you can and call me back. I’m gonna try and quick run home and get a bag and a change of clothes.”

“If you want I can pick you up and drive you to the airport.”

Buddy rarely drove his own car to the airport because after the return flight he was generally too incapacitated to drive it home.

“I don’t mind picking you up, Buddy.”

“No, you better stay at the office.”

Buddy didn’t want to have to talk to Marlene, or to anybody.

(Continued here. Kindly look to the right hand side of this page for all other published episodes of Uncle Buddy’s House™, A Desilu Production starring Mike Connors as Buddy, and co-starring Gail Fisher as Marlene.)

Father's don't get better than Buddy. You can protest if you want, but he's there the minute his kids need him. Wonderful dialogue, as always; as good as being there, maybe better.

Stupid Ancient Mariner is ruining their chance at Cannes! lol

You know, my dream job would be to do music for movies. If I could do it all over that's what I'd try to do. But, I didn't even know when I was younger that that was even a *job* one could have.

How fun and cool would that be?!

And I was one of those who didn't get the Melville and Sollima references, so thanks for the links.

Love the photo of Melville. The way he's holding his hand and mouth! The sunglasses. Great shot.

Thanks, Kathleen. I suspect you would get along with Buddy much better than either of his wives did.

BG, I know, Melville was just too cool for words. He used to drive a big American convertible around Paris, wearing a cowboy hat and his shades. I love his movies. Check out "The Samurai" sometime.

Just curious: is Triggerwoman II out on DVD yet?

The Triggerwoman II Deluxe Edition (remastered, including deleted scenes, blooper reel, commentaries and "Making Of" documentary) should be out really soon, exclusively at Kresge's 5&10s everywhere.