“Railroad Train to Heaven”, Part 162: “She laid her hand on me, and she moved through the fair…” 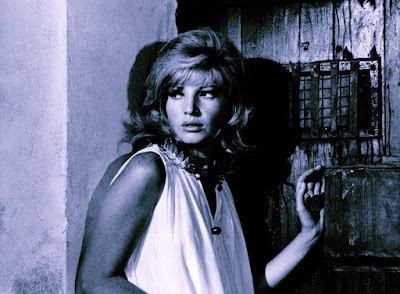 Our previous chapter ended with our memoirist Arnold Schnabel and his celestial friend “Josh” still in the process of trying to leave a somewhat disquieting little party in a weirdly large apartment above Cape May NJ’s happening hotspot the Pilot House (“Sway and Swing to The Soothing Sounds of Summer, with ‘Freddy Ayres and Ursula™’ -- as seen on WFIL TV’s ‘Chief Halftown’ Show!”) in the old port of Cape May, NJ, on this sultry Saturday night in August of 1963...

(Click here to go to the first chapter of this Gold View Award©-winning chef-d'œuvre, “Longer than the Bible, the Koran, and the Bhagavad Gita combined, and infinitely more rewarding than all of them.” -- Harold Bloom.

For a moment or two no one said anything else. I think we were all simply watching Magda walk away in her shimmering white gown. Halfway across that enormous room she began to look more like liquid than substance, and then as she moved even farther away she seemed more like mist than liquid.

She made a right turn into a far-off hall, and then she disappeared.

“Stay for another bowl, Arnold,” said Mr. Arbuthnot, his finger tamping a refill into the hashish pipe’s bowl. “What’s your damn hurry?”

“Wait,” said Ursula, and she glided up from her seat with an amazing gracefulness for a woman of her years. She came over and stood before Josh, whose arm I still held. She had lit another cigarette in her black holder, and she held it up with one hand, smoke drifting from one dry and cracked corner of her scarlet mouth.

“Be careful with her, young fellow.”

“Who else am I talking about? Jean Harlow maybe?” She put her free hand on Josh’s shirt. “Don’t f**k with her,” she said. “If you do I promise you, you’ll regret it.”

“What a dame,” said Mr. Jones, gazing at Magda admiringly and then lighting a cigarette with a Pilot House match.

“Now, Ursula,” said Freddy, from his seat, sipping his absinthe, “be nice. I’m sure we have nothing to fear from this nice gentleman.”

Josh took a drag of his Pall Mall

“I assure you I shall behave with perfect decorum towards your granddaughter,” he said.

She took her hand away from his shirt and gave him a slight tap on the cheek.

Josh had taken her hand in his, and now he bowed his head and kissed it.

“You are some kind of charmer,” said Ursula.

I pulled him along and away.

“Good night, everyone,” I said.

“What a pair of lightweights,” said Mr. Jones. “Let’s put some more music on! How about some hot jazz?”

We made it to the stairhead, and I let Josh go first. As we went down we could hear the cackling laughter and badinage of the old people.

Josh stumbled on one step, I reached down and grabbed his arm, but then he waved his hand that he was okay, and continued on down.

At the bottom of the stairs, with his hand on the door knob, Josh turned to me.

“Okay, fine. But if you had to say, just off the top of your head without thinking about it, if you had to -- am I in trouble, or not?"

He dropped his cigarette to the tiled floor, which was already well-littered with butts. He ground it out with the sole of his sandal. “Well, okay, let’s go.”

He opened the door and went out into the hallway, and I followed, shutting the door behind me.

Another song was on the jukebox now, a girl asking some boy to go out with her.

Just as Josh was about to leave the hallway and go out into the main part of the bar he stopped and held me back with his hand.

I went backwards a couple of steps and Josh came with me.

“All right,” he said. “Carefully -- carefully take one step and then lean forward and look down to the right, down at the end of the bar. Just a quick look.”

I did as he told me.

Down at the far end of the bar sat and stood, in order, Mrs. DeVore, seated, her husband Bob standing to her left, and to his left sat Miss Evans, with Jack Scratch seated next to her; standing in between Scratch and Miss Evans was St. Thomas. And standing between Miss Evans and Mr. DeVore was a tall dark handsome gentleman in an ash-colored suit. He had a moustache and very dark shiny hair.

Josh pulled me back.

“The nerve of that guy.”

“He has other names,” said Josh. “But for our purposes, let’s just call him Lucifer.”

I had been afraid Josh would say something like that.

(Continued here, and indefinitely, if not infinitely. And kindly turn to the right hand side of this page to find what one hopes is a listing of links to all other available chapters of Arnold Schnabel’s Railroad Train To Heaven©, recently voted “most sublime memoir ever” by the Knights of Columbus, Olney Chapter, Philadelphia PA.)

OMG, as the kids say.
This will give me interesting dreams tonight.

I'm not sure why Josh is in trouble here. Hasn't he faced this kind of thing with great grace a coupla millenia ago?
Arnold and Josh both, though, seem to be caught in a scene that smacks of ecclesiastical issues.

Dean -- you have made my "Top Five Comments Ever" list. Ruh-roh!

LOL! The damn DeVores! Their sighting scared me more than that Lucifer fellow.

LOL! The damn DeVores! Their sighting scared me more than that Lucifer fellow.

The more the merrier, Jen!

By the way, I know you are a major DeVore fan. I wonder if we should have a spin-off series devoted just to them? You know, kinda like "The Ropers"?

Oh my gawd! YES! It'd be like watching a train wreck! Like chewing on cotton balls! Like... like nails down the chalkboard! You'd hate it, but you wouldn't be able to not read about every antic! Besides, the comedic possibilities are endless.

I'm now imagining one of those movie trailers where people are running down the street, pushing and shoving,trying to escape something horrible...

Heh heh, we'll definitely have to put "The Devores" into "development" as we say in Tinseltown, Jen. We obviously have one committed fan already...

I just read about your musical guest Anne Briggs--I hadn't known of her before, but what a fascinating figure.

Manny, I know. I've been waiting for a while now for the right time to put one of her songs up...

We obviously have one committed fan already...