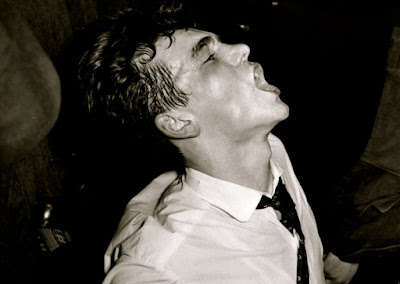 In our previous episode of this Gold View Award™-winning masterpiece (newcomers may go here for the first chapter) our hero Arnold Schnabel found himself about to be hijacked by four elderly degenerates in quaint old Cape May’s The Pilot House (“Featuring the “Swingin’ Sounds of Summer with ‘Freddy Ayres and Ursula’™!”) when suddenly his friend and so-called savior Josh emerges from the men’s room, somewhat under the weather, on this long hot night in August of 1963…

“Yes, do join us,” said Ursula to Josh. She had been clenching her cigarette holder in her teeth, but now she took it out between two stick-like fingers, while still holding onto my arm with her other hand. “Frankly,” she said to Josh, “you look as if you could use a little pick-me-up, my friend.”

Josh simply blinked at her, and then he addressed me.

“Why are these people pulling on your arms, Arnold?”

“We were not pulling,” said Ursula, and putting the stem of her cigarette holder back between her teeth, she began caressing the arm she had just been pulling.

“No, not pulling at all,” said Freddy, patting my other arm affectionately. His cigarette was between his perfect dentures, and a bit of ash fell onto my bare forearm.

“And why were you fellows pushing him?” said Josh to Mr. Jones and Mr. Arbuthnot.

“Pushing?” said Jones. He too had a cigarette between his leathery old lips. He took it out. “Who’s pushing?”

Freddy finally, and seemingly with reluctance, relinquished my arm, then took a couple of graceful steps closer to Josh.

“Listen, Josh,” he said. And getting up on his tiptoes just as he had done with me (I noticed now that he wore pointy patent leather slip-on shoes) he cupped his little hand to the side of his mouth and whispered something in the direction of Josh’s ear.

“No no no,” said Freddy, waving his hands, and looking nervously around. “You fellows are so brazen!”

“Come on up to our apartment,” said Freddy.

“Look at me, I’ve just been puking my guts out.”

“Jonesie, be silent,” said Mr. Arbuthnot. “You know, Josh,” he said, “I have just the thing for you.” He patted his breast pocket. “A few drags of this special, uh, something I have in my pocket here and you’ll be ready in no time to leap up and dance the boogie-woogie. Or whatever it is you young people dance nowadays.”

“I believe it’s the watusi’s all the rage nowadays,” said Mr. Jones.

“A bowl of my borscht is what this boy needs,” said Ursula. “A nice cold bowl of borscht with a shot of vodka in it.”

For a moment Josh looked as if he were going to be sick again.

He took his Pall Malls out of his shirt pocket.

“Look, have a nice time, everyone,” he said.

He shook up a cigarette, and put it in his mouth. Freddy was right there with his thin gold lighter, and Josh allowed him to light his cigarette. Everyone was now smoking, except for me.

“You know, Josh,” said Freddy, “you really would feel better with a bowl of Ursula’s borscht inside you.”

“And a bowl of my opiated kif,” said Mr. Arbuthnot.

Josh slowly exhaled a good lungful of smoke, and then said, “I rinsed my mouth out before leaving the men’s room. Splashed a little cold water on my face and neck.”

“Oh, did you now,” said Ursula. She removed her cigarette holder from between those scarlet old lips and smiled. “Yes, my dear, I will fix you a nice bowl of borscht.”

“Some other time,” said Josh, and he started to walk past our little group, staggering just slightly.

Ursula pushed past me, almost knocking me over (fortunately Mr. Jones and Mr. Arbuthnot steadied me), and locked the talons of her right hand onto Josh’s forearm.

“I can tell you are a gentleman,” she said, speaking without removing her cigarette holder from her teeth.

He said nothing to this.

“You are dressed somewhat raffishly, but this is a handmade shirt, of the finest Egyptian cotton.” She fingered the damp cloth. “You dropped a double sawbuck into our jar as if it were a piece of tissue paper.”

She removed her holder from her mouth with her left hand.

“I must introduce you to my granddaughter.”

“Why not right now? She is upstairs.”

“You have a granddaughter upstairs?”

“Is that so strange?”

He put a knuckle to his lips, and looked as if he were fighting off a fresh wave of nausea. For some reason I remember that a new song was playing on the jukebox now, the one about it’s being Judy’’s turn to cry.

“What’s a matter, don’t you like pretty girls?” asked Ursula.

(I would like to interpolate a confession here, if I may stop the action, such as it is, for a moment, and my confession is that inwardly at this point I breathed a great sigh of relief that once again thanks to Josh I was no longer the center of attention. Perhaps escape was a possibility after all.)

“Come then,” said Ursula. “We will introduce you.”

“Ursula, I think really I should just --”

“Tomorrow we may all be dead,” said Ursula. “What are you going to do? Go home? Sleep?”

“You have the rest of your life to sleep.”

“Who cares? We are all bohemians here. Now come. A bowl of borscht. Something to smoke and to drink. A pretty girl.” She caressed Josh’s arm even more sensually than she had mine. I felt a slight twinge of jealousy, or perhaps I should say envy. “This is what life is about,” she said.

“What else would it be about, you foolish boy?”

“You are joking, right?”

“Not without Josh,” said Ursula. She hadn’t taken her eyes away from his. “Come, my darling,” she said.

“Look,” said Mr. Jones, “if you people are gonna stand here all night I’m going to go back and get our Manhattans.”

And off he went, and pretty quickly for such an old man.

Suddenly his eyes rolled up into his head, he swayed back and forth, he attempted to lift his cigarette to his lips, dropped it, and then fell forward, collapsing into my arms.

(Will this night ever end? All we can say is: continued here. Kindly look to the right hand side of this page for a presumably current listing of links to all other extant chapters of Arnold Schnabel’s Railroad Train to Heaven™, absolutely free for a limited time only. Offer void in states still possessing a shred of decency.)

Josh can't hold his liquor; carries blunts of Lambsbread; doesn't need to eat; is chronic for nicotine; and likes pretty girls. (Maybe He was being polite about the pretty girls!??)
I might be wrong, but isn't he pushing somewhere about 1,964 years of age here? Who wouldn't keel over?
Guess all I can do is pray that Josh rises above His perpetual trials, which more and more mirror Arnold's, who could almost be a reicarnation of St. Thomas, Jesus's Twin. (A detail Ireneus suppressed via the Acts of St. John.)
In light of this, today's song is a strange and scary thought.

Yeah, I know. It's this allergy medication. Sorry.

Ah, Kathleen, I love all your comments -- even the ones written under the influence of allergy medication!

what a cliffhanger!
Sounds like Ursula's borscht can revive Josh, though.

Damn, I want some of that borscht myself!

I'm going to try the shot of vodka next time I make borscht.