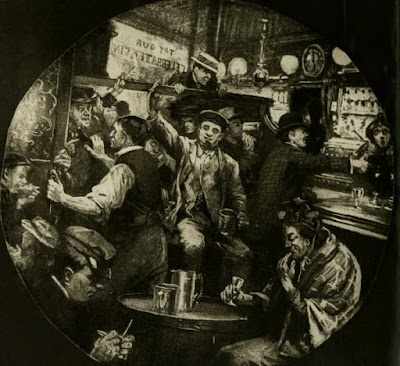 Let’s rejoin our hero Arnold Schnabel and his friend and personal savior “Josh”, on the seaside promenade of Cape May, New Jersey, on this fateful night in August of 1963...

(Scroll down or go here to read our previous chapter, or click here to be magically transported back to the beginning of this Gold View Award™-winning masterpiece, which the noted critic Harold Bloom has called “perhaps the greatest American memoir, at least until Sarah Palin's comes out”.)

Up on the promenade we both took a look back, but no one was following us.

“We’re probably okay,” said Josh. “That was pretty strong weed I gave them.”

“Let’s keep moving though,” I said.

We went over to the steps to the street. The two kids were down there, waiting for the light to change. They glanced up at us, and I looked away, I think Josh did also; neither of us wanted to embarrass them further.

Josh took out his cigarettes and offered me the pack.

I had actually raised my hand to take one, because I had once again forgotten all about quitting, but now I lowered my hand, reluctantly I admit. I was only human, which was more (or less) than Josh could say, who shook one up and put it in his mouth.

“I thought you said that last one was going to be the last one,” I said.

“That’s true,” he said, lighting up. “But I wasn’t counting on being hijacked by a pack of lunatics before we could enjoy a drink together.”

“Do you know you sigh a lot?” said Josh.

The light changed. The guilty young couple hurried across the Beach Drive.

“So odd,” said Josh, obviously enjoying his smoke. “This concept of shame. They were only doing what comes natural after all.”

“Maybe shame is natural,” I said.

“Come on,” he said, “let’s go, before the lunatics realize we’ve flown the coop.”

We went down the steps and across the road.

“Well, I understand if you just want to turn in,” said Josh.

“No, I understand, really, Arnold. I’m being selfish.”

We headed up Perry Street, we were only a few blocks from my aunts’ house.

But then I suddenly realized what a stick-in-the-mud I was being. Here I was being invited for a nightcap by the son of God, and I was playing hard to get. What was my problem? It wasn’t as if one more drink was going to kill me.

“Great. The bars are going to close soon anyway, right?”

To tell the truth, most of the Cape May joints stayed open till three, but I didn’t mention that.

“No,” I said. “Steve and Miss Rathbone might still be there. And Larry.”

“Oh, right. It wouldn’t exactly be a quiet drink then, would it?”

“What about that Negro bar? Pete’s?”

“I think I might have some friends there, too.”

“You and your friends.”

“So where should we go?”

We turned up Carpenter’s Lane. I realized then that Josh was swaying and staggering slightly.

“Sure,” he said, although he continued to walk in anything but a straight line. “Oh, how’s your leg by the way?”

My leg would have been a lot better if people wouldn’t keep reminding me of it.

“Not so bad,” I said, although as soon as I said this of course a shot of pain ran up from my ankle to my knee and then remained there.

“Okay,” he said. He looked all around. No one was nearby.

“All right, I really shouldn’t do this, but I do have certain privileges.”

He hunkered down in a squatting position before me.

“Just hold still. Get your mind out of the gutter, Arnold.”

He put his cigarette in his mouth, and then placed both his hands on my sore leg, running them lightly down from my knee to the top of my Keds. Then he removed his hands and looked up.

I stepped around him, walked a few paces and then back to where he still squatted there, smoking his cigarette.

“No. Just a little numb, like a shot of Novocain, I guess.”

“The numbness should wear off.”

He started to rise up, but he lost his balance and fell back, landing on his backside.

I went over, extended a hand, helped him up.

“Maybe we should skip the drink, Josh.”

He brushed off the seat of his khakis and we continued on our way.

It was true, my leg didn’t hurt any more, although I had to be careful of my step because of the numbness.

“Re-light one of these babies.”

And he took his stubbed-out reefer out of his shirt pocket.

Actually a quick glance around confirmed that there were indeed a few pedestrians coming now from both directions on the block.

He tossed his cigarette away, put the reefer between his lips, took out his lighter and lit it up.

We continued our walk.

He held it right out in front of me. It did smell enticing.

I took it and had a few drags. Not that I was any expert, but it seemed like good stuff.

“The thing is,” said Josh. “It gets a little boring up in my father’s house. I like it down here. What do you think?”

He took the reefer from my fingers.

“Well, that’s true,” he said, puffing away. “That is a basic flaw in the set-up I suppose.”

He took one more good drag, then handed the reefer back to me.

He let out the smoke in a great redolent cloud.

“This is why all these religions believe in heaven, in paradise,” he said. “People really want to believe they’ll wind up in a place where they’ll be happy and not ever be in pain.”

I took a drag.

It occurred to me that even if we did get stopped by a cop, that Josh would probably be able to get us out of it.

But then it also occurred to me that he hadn’t been able to get himself out of the jam when the police came to arrest him in Gethsemane.

“If only they knew,” he said, holding out his hand for the reefer, which I passed to him.

“Yeah,” I said, remembering all those empty hallways and empty rooms in his father’s house. The waxed floors, the empty vases.

“Oh, good, the Pilot House,” he said, because suddenly we were now outside it. He started up the steps to the entrance.

“You’d better put that out.”

He put out what was left of it on the railing, then dropped the stub back into his shirt pocket.

(Continued here, unless we are legally enjoined to cease and desist. Please look to the right hand column of this page to find what purports to be an up-to-date listing of links to all other available chapters of Arnold Schnabel’s Railroad Train to Heaven™. Soon to be adapted as a 120-part “telenovela” on Telemundo, Tren De Ferrocarril Al Cielo, starring Antonio Banderas as Arnold and Javier Bardem as “Josh”; produced and directed by Larry Winchester.)

Astonishing! And yet just as I suspected. In religion class someone always asked about candy Heaven. Could you have anything? The teacher always said that yes, you could--for eternity.
Sometimes a kid would ask, if it turned out you didn't like it up there, could you come back down? Then the answer was that everyone liked it there--everyone, forever.
Now the truth comes out!

Antonio Banderas as Arnold? No, really I can't see that working. Is Arnold really that hunky? and macho looking? and positive?

On another tack, have you read "Revolutionary Road"? Brilliant and troubled. Dick and Daphne gone horribly horribly wrong. I much prefer your stories actually.

Kathleen, I too remember those theological discussions from parochial school -- I love how practical little kids are in their religious musings. "Yeah, but getting back to the candy..."

Dianne, remember, the "telenovela" is for the Spanish-language channel, and I think they have an ironclad rule that all leading men should be unassailably hunky. However, if Arnold were Hispanic in some alternate universe, hell (or heaven), why not Antonio?

And, yes, I did read "Revolutionary Road" some years back, although I haven't seen the movie yet. I love your description of the lead characters as "Dick and Daphne gone horribly wrong". And I wouldn't turn down Kate Winslet or Leo DiCaprio if they insisted on playing the parts...

I wonder what Josh's father is up to while his son is out carousing. Is he watching late night TV while the Mrs. sleeps? Or working on some project in his garage? Or (heaven forbid) out on the town himself?

On the same tack as tack as Manny, which haunts does the Holy Spirit favour for a spot of R&R?

Manny and Di, we can only hope that your various theological questions will be answered in future installments.

And, Di, you may be deprived of the strange glories of Telemundo down under, but on the other hand you have "Kath & Kim"! "I've got one word for you..."

After Manny's comment, I'm now wondering if Josh has a curfew...

Jen, something tells me that Josh is not going to make his curfew this night.