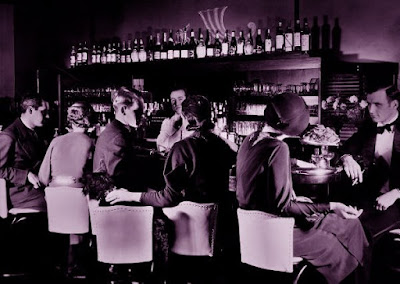 Previously in this Gold View Award©-winning memoir our author Arnold Schnabel found himself standing at the bar of the Pilot House (“Cape May’s ‘in-spot’ for the ‘in crowd’, featuring ‘The Sophisticated Seaside Airs of Freddy Ayres and Ursula’ seven nights a week!”) with two of his nemeses, the seemingly indefatigable senior citizens the Messrs Jones and Arbuthnot, on this very long Saturday night in August of 1963...

As I put the glass down I thought, Now why am I drinking this again? I still had half a mug of beer in front of me. Another beer would have been bad enough, but a Manhattan, and a rather large one at that? Oh, well, nothing to do but chalk it up to yet another of those occasional attacks of complete insanity that all too frequently break up the monotony of my usual semi-insanity.

“Wait a minute,” I suddenly said. “If you don’t mind my asking, how do you two gentlemen know each other?”

“Mr. Jones and I have known each other for many years, Mr. Schnabel,” said Mr. Arbuthnot.

“Why shouldn’t we know each other?” said Mr. Jones.

“No reason,” I said, backed into a conversational and moral corner.

“Do you suspect us of some nefarious plot?” said Mr. Arbuthnot.

“Is it outside the realm of your imagination that two of your acquaintances might be separately acquainted?” he asked.

“Jonesie here simply stopped by my rooms, in search of a sympathetic drinking companion.”

“And it was simply by chance that together we would find you here.”

“Just as we were talking about you,” said Mr. Jones.

“Although it may surprise you to learn that there is a whole universe out there that is quite oblivious of your very existence,” said Mr. Jones.

“Don’t think the world revolves around you, Arnold,” said Mr. Jones. “Believe me, it doesn’t.”

“Oh. Did you know then,” said Mr. Jones, “that this majestic orb in fact revolves around no other than me?”

I didn’t dignify this remark with a response. Instead I took a drink of beer, finishing the mug.

“Are you here alone then, Mr. Schnabel?” asked Mr. Arbuthnot, with a detective’s glance at Josh’s only partially-drunk mug of beer and half-empty whiskey glass.

I pushed my empty mug away. To my dismay the bartender suddenly materialized from nowhere, scooping the mug away with one hand and with his other hand immediately replacing it with a fresh chilled one brimful with foamy beer. And I still had most of my Manhattan left.

It was true, Josh had been gone for some little while.

“Let us know how it all comes out,” said Mr. Jones.

“We’ll order another round of Manhattans,” said Mr. Arbuthnot. “One for your mysterious friend, too.”

“All right, but really, don’t order me or my friend any more drinks.”

So I left them, and went down to the turn of the bar. Freddy was singing “Blue on Blue” now, while Ursula held off on the saxophone, running her fingers idly on the keys and looking down, nodding her head to the beat. Normally I might have put a dollar or so in Freddy’s tip jar, but since Josh had given him a twenty I figured that was plenty from the both of us.

I went past the stage and down the little hall to the men’s room on the right.

As soon as I entered I heard the unmistakable sound of a man retching, horribly.

Fortunately no one else was in there right now.

There are only two urinals in the Pilot House men’s room, and two stalls. I walked over, and there was Josh, kneeling in one stall, the door not even closed all the way, his head over the toilet.

“Josh?” I said, pushing the door open as far as I could against the soles of his sandals.

He threw up again. I waited.

“Why did you let me drink so much?” he asked, without turning.

“I thought you could handle it,” I said.

He threw up again, but just a little bit. His shirt was soaked with sweat, sticking to his skin. I could see his back muscles, contorting.

“You’re probably right,” he said, still leaning over the toilet. “Nobody to blame but myself.”

“Did you eat tonight?” I asked.

“You should always eat before you drink,” I said.

He spat into the toilet.

“How could you possibly help me, Arnold? Oh, Christ --”

I went over to the urinals. I figured as long as I was here, I might as well void my bladder. I unzipped.

“Arnold,” called Josh, from in the stall, “just go, okay? Wait out in the bar. Seriously.”

I zipped up, even though I actually did have to go again.

And then I stopped for just a moment before going out into the bar again, because I just then realized that the men’s room had not smelled badly, even right outside the stall that Josh had been vomiting in. If anything the odor in there had been pleasant, like the smell of my aunts’ garden on a fine morning.

But then I continued on my way.

Nothing surprised me any more.

(Continued here, and even up to the point of exhaustion and then one step beyond. Please look to the right hand side of this page for a conceivably up-to-date listing of links to all other available chapters of Arnold Schnabel’s Railroad Train to Heaven™. Soon to be a major motion picture starring Billy Zane from Buddy Best Productions.)

Josh's puke, as wretched and embarrassing as anyone's, smells like flowers?

I tend to think I have it rough--all women have it rough. But I'm becoming convinced that being both man and God isn't an easy hand to play either.

hoo boy. Didn't see that coming.
I guess it really does happen to the best of us.

Josh should have turn that beer, etc, into water. It's safer.

I wonder if Freddy & Ursula have any albums out that I can buy.

Goodtime, you may be able to find on eBay "So Sophisticated! The Swingin' Sounds of Freddy Ayres and Ursula, Recorded Live and In Person at The Pilot House!", on the Lawn label.

Do The Bossa Nova

Take The A Train

On The Way To Cape May