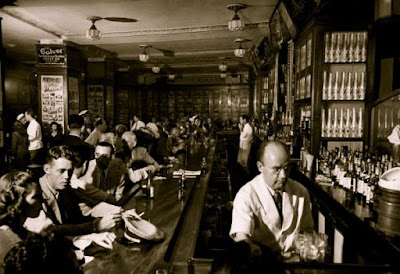 Our previous episode found our hero-memoirist Arnold Schnabel and his friend and alleged savior “Josh” in yet another bar, Cape May’s sophisticated Pilot House (“Featuring ‘A Stroll Down Tin Pan Alley with Feddy Ayres and Ursula’, seven nights a week!”).

But even the great men have to go sometimes, and so Josh has gone off to the men’s room, leaving Arnold standing alone at the crowded bar on this warm night in August of 1963...

(Newcomers may click here to go to the beginning of this Gold View™ Award-winning masterpiece.)

I turned towards the bar and lifted my beer. I had thought yesterday was a long day, but this one was really starting to take the cake. I gulped some beer, put the mug down. When it was empty I would go home, no matter what Josh said. I had to meet Larry again tomorrow morning around 10:30, to work on our screenplay, but since tomorrow was Sunday I would have to get up even earlier than otherwise in order to go to the nine o’clock mass first.

But then I thought, Wait, I’m standing here in a bar with Jesus himself, why am I worrying about going to Sunday mass? Not to mention that since my last encounter with Elektra I was technically in a state of mortal sin anyway. But it’s hard to break these habits of a lifetime, no matter now absurd they may be. Hard but not impossible. Had I not successfully and at long last broken the habit of celibacy?

When Josh got back from the men’s room I would ask him about this Sunday mass business. If it turned out that I really was under no obligation to go to mass, then that would mean I could sleep an extra hour. In fact I might even just have another beer after my current one, because now I felt wide awake anyway.

Suddenly I became aware that two beings were standing right behind me; however, when I looked into the mirror in front of me across the bar I could see no one there.

Great, I thought, was I now to be hounded by invisible creatures, as if visible ones didn’t give me enough grief already? I took a breath, squared my shoulders and told myself that I would brook no nonsense from these ghosts or spirits, whatever they were, be they from heaven or hell or elsewhere. And if it turned out I couldn’t handle them by myself, well, then I would just have to hope that Josh made it back from the men’s room in time to rescue me.

I turned around, and discovered that the reason I hadn’t seen anyone in the mirror was that no one was standing behind me but Mr. Arbuthnot and Mr. Jones, neither of whom was barely more than five feet tall.

“My very good friend,” said Mr. Jones, his trim little body swaying in a gentle circular movement, while his right hand, holding a lit cigarette, traced circles in the opposite direction.

“So you have a taste for the tipple,” said Mr. Arbuthnot.

“Speaking of which, I’ll have a Manhattan,” said Mr. Jones.

“Mr. Jones,” I said. “Do you really think you should be drinking any more tonight?”

“It’s either that or writhe miserably on my narrow bed all night, wrestling with the demons of a misspent life.”

“Summon that barman’s attention, will you, Mr. Schnabel?” said Mr. Arbuthnot. “He acts as if we don’t exist. Tell him we want Manhattans here.”

I turned, and, miraculously, the bartender was right there. Apparently even being merely Josh’s companion held a certain credence in the bars of the world.

“Right away, sir,” he said and off he went towards the drink-making station, but then Mr. Jones shouted out in his piping little voice, “Make that three Manhattans!”

“Yes, sir,” said the bartender and he continued on his way before I could tell him No, please, just two Manhattans.

The two small old men squeezed in next to me on either side. They had both been wearing straw hats, and now they doffed them, laying them down on the bar. Without their hats they looked even smaller, with their shiny little bald heads barely above the level of the bar top.

“So where’s your lady friend, Arnold?” said Mr. Arbuthnot, taking out his little Meerschaum. “If I may call you Arnold.”

He produced a leather pouch and began filling his pipe.

“Some of the best lays I ever had were Jewish dolls,” said Mr. Jones.

“And when was the last time you had a lay, Mr. Jones?” asked Mr. Arbuthnot. “Nineteen twenty-two?”

“In point of fact it was as recent as nineteen hundred and forty-five,” said Mr. Jones. “I’ll tell you, the war years were good ones for getting laid, what with all the young men overseas.”

“I well remember,” said Mr. Arbuthnot, his watery eyes gleaming behind his spectacles. ”Those were good times.” Then his face grew sad. “However, the war ended, the men came back.”

He grabbed a book of Pilot House matches from a little bowl, and tore off a match.

“It was all downhill from then on,” said Mr. Jones.

“Old age,” said Mr. Arbuthnot, lighting his pipe with tiny little puffs, “wrapping itself round the walking carcass like an insatiable python.”

“No more so than the reality it illustrates,” said Mr. Arbuthnot. He tossed his match to the floor.

“Would you gentlemen prefer to stand next to each other?” I said, stepping back from the bar.

“Of course not, my friend,” said Mr. Jones, and his little hand reached up and grabbed my polo shirt sleeve. “Belly up to the bar, Arnold! That is your name, isn’t it?”

“Three Manhattans,” said the bartender, laying three chilled empty cocktail glasses on the bar with one hand and raising high in the other a large shiny metal cocktail shaker.

“No cherries,” said Mr. Jones. “They take up precious space in the glass.”

“No cherries,” said the bartender, placing a drink before each of us in succession.

“How much?” I said, sighing deeply for the nine-hundredth time that day.

“I’ll put it on your tab, sir,” he said, smiling as if knowingly.

“First drink of the day then!” said Mr. Jones, raising his glass high -- well, high for him. “First one of the day,” he repeated, “and I hope to goddam hell it’s not the last!”

“You’d better hope that the day is not your last,” said Mr. Arbuthnot, also raising his glass.

“Oh would that this day were my last,” said Mr. Jones. “I should like nothing better than to drop dead, preferably whilst doing exactly what I’m doing now.”

And he put the glass to his ancient lips and drank.

“Hear, hear!” said Mr. Arbuthnot, and he drank from his glass as well.

Then he looked up at me and gave me an elbow in the side.

I raised up my Manhattan and drank.

(Continued here, and until we drop. Kindly go to the right hand side of this page to find what might on certain days be a complete listing of links to all other available chapters of Arnold Schnabel’s Railroad Train to Heaven™. “There’s nothing I like better than to get really stoned and then try to read some Schnabel.” -- Harold Bloom)

What's taking Josh so long? Arnold gets whisked away on dubious escapades faster than I can wash my hands. Josh must know this. He knows everything.

Kathleen, as Arnold has discovered, all sorts of things can happen during a supposedly simple trip to the lavatory...

Arnold's experience here reminds me of why I avoid bars on weekends. Or is every night like this in Cape May in the summer?

Oh my God, Manny, believe it or not it is like this all through the summer. Or at least it was when I used to frequent these establishments. Things lighten up considerably after the Labor Day weekend, although the Joneses and the Arbuthnots are in even greater evidence then...

...of the longest day ever!