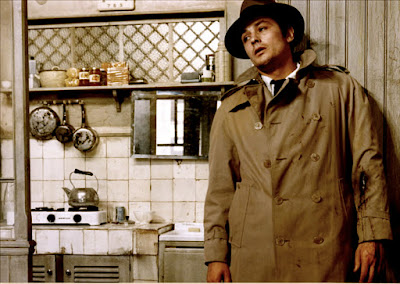 Larry Winchester* now returns to the suave voice of Dick Ridpath, last seen floating in free-fall following a shoot-out in a flying saucer (see Episode 108) as it passed through dimensions, several thousand miles above a town called Disdain...

Well, by the time I came out of it I won’t say I couldn’t have used a martini.

We were out of free-fall now and I had somehow wound up back in my seat. To my right Daphne was slumped in her own chair, passed out. Harvey was passed out in his seat also, his head against the console.

“They’re okay, Mr. Ridpath. It always gets a little weird passing through dimensions. They’ll probably wake up in a minute or two. I stuck you and the lady back in your seats. The young fella was already strapped in, so he was okay.”

This was Brad, sitting to my left. Rather intently turning dials, toggling switches, punching buttons.

On the floor behind us Mr. MacNamara and Buddy lay stretched out on their backs side by side, their eyes closed, in a big pool of blood. Blood was splattered all over the place, actually. I suppose it had all slopped down like rain when we left free-fall.

Over by the refreshments nook Frank lay curled up in a slightly smaller pool of blood.

“I don’t think Frank’ll ever croon ‘Fly Me To The Moon’ again. Buddy and Mac, I dunno. They’re still breathing, but it don’t look good.”

Wait, have I mentioned all the TV screens? All these TV screens spread out above and around the pilot’s console. And by glancing from one to another you could get some idea of what was happening back on the Earth.

There was Enid’s truck sitting out in the dark desert somewhere.

Close-ups of Enid and Hope, smoking cigarettes in the cab of the truck, Hope at the wheel, Enid next to her.

That motorcycle guy, Moloch, unconscious with his nose smashed in, slumped next to Enid.

On another screen a wide-shot of all these motorcycle guys ranged along the outside edge of the atomic sinkhole below that mesa, the one that awful desert-trash family had disappeared into.

And my old friend Pym’s head sticking out of the sand.

At this point nothing surprised me.

On other screens I saw Big Jake and a thin bald man driving in Jake’s Cadillac. (Later I found out that the bald man was the town doctor, named Goldwasser.)

Another screen showed Paco and Derek driving together in an old Plymouth station wagon.

And on one screen I even saw the flying saucer we were in, it was flying away from the Earth, just zipping along, the Earth getting smaller and smaller.

I asked Brad what he was doing.

“Takin’ us back to the station, Mr. Ridpath. Soon as I build up enough steam, we’re crashing back through the dimensional wall again and heading back to the casino. Sorry, but that’s the way it is. Unless you want to try to pilot this baby.”

I looked at the controls. They were rather daunting. But then I thought about the casino. I really didn’t want to go back there again. Especially considering the circumstances under which we had left it. And lugging back its boss’s bullet-ridden corpse to boot.

Also there was the question of Hope and Enid and those motorcycle fellows.

No, this was an untenable situation.

I saw my old Browning lying on the deck near my feat.

I got off my stool, picked up the gun, pointed it at Brad.

“Jesus fucking Christ, you’re gonna try and pilot this thing, and land it in one piece?”

“Fucking earthlings. Y’know something? I live another hundred thousand years I will never understand --”

“Well, no, not okay, because I want you to do that finger-healing thing with Mac and Buddy and try to save them.”

“Look, Mr. Ridpath.” He flicked another switch and then swiveled around on his chair to face me. “It’s like this. I can try to land this heap, which is the very latest model and which to tell the fucking honest truth even I am not familiar with, except for one article I skimmed through in Flying Saucer Mechanics -- let alone qualified -- and try to get all our asses down on the ground in one piece; or I can, say, turn the controls over to you who are shall I say even less eminently qualified while I try to do the laying on of hands bit with these two guys who are probably goners irregardless. Now -- you’re an intelligent man for a goddam earthling. You decide.”

Well, I chewed on this for a couple of seconds. He certainly had his points.

“Turn it around,” I said, “and point it at the Earth again, Brad, then I’ll take over.”

“Oh, right, and send us all maybe crashing into fucking Mount Everest at fifty thousand fucking miles an hour.”

Well, sometimes I’m just a little nutty, I admit. So I cocked the pistol, took a step closer and pointed it between Brad’s eyes and told him to do as he was told.

This seemed to scare him. He swiveled around again and did something with the dials. You felt the saucer lurch. I looked up at the screen and now the Earth was getting larger.

I told him to get up.

This time I was thinking. I patted him down, and sure enough I found a snubnose .38 in his coat pocket. Mac’s gun. I put it in one of my own pockets. Then I found my Airweight in Brad’s trouser pocket, and I took that. I stuck it in my other pocket and told him to get to work on Mac and Buddy.

Then Daphne woke up.

And she was upset of course.

(Continued here. Kindly turn to the right hand side of this page to find a possibly up-to-date listing of links to all other extant chapters of Larry Winchester’s A Town Called Disdain™, soon to be an American International Picture starring Alain Delon.)

The Spencer Davis Group: can’t get enough of it:

"At this point nothing surprised me."
Word. And I mean that in the Biblical sense.