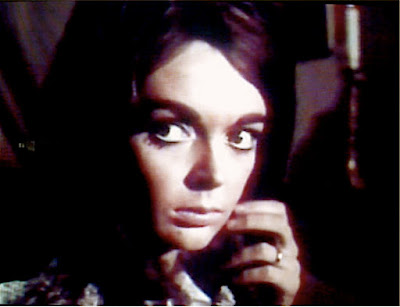 Larry Winchester’s crane-mounted camera now swoops down from the desert night to a band of motorcyclists circling a ‘54 Dodge flatbed truck (with tommy-lift), its tires deflated by the guns which the cyclists, members of a foul gang of reprobates known as the Motorpsychos, now fire into the air as they shout and roar and cause their engines to emit rude explosive noises.

Inside the truck sits the sculptress/café proprietor Enid, holding an army .45 on the gang leader Moloch, whom she has just knocked out with said heavy weapon, while at the wheel sits the rancher’s daughter Hope, of the lustrous dark hair and deep dark eyes.

(Click here to review our previous chapter, or go here to see the beginning of this novel, of which the critic Harold Bloom has said, “The 21st Century canon starts here. Let’s hope it doesn’t end here.”)

Hope softly smoked, stroking Moloch’s Webley in her lap, and watched the Motorpsychos wheeling and bucking round and round, shooting and screaming, headlights so bright, lighting up the dust and stones and pebbles flying all about, while off there to the right loomed the dark hump of Dead Horse Mesa with that great scooped depression spreading out from its base.

All this now was some sight, a beautiful and amazing sight in its way, a sight she doubted anyone had ever seen in quite this way -- no, of course no one had ever seen it this way. How could anyone, unless she, Hope, had existed before, been stuck in this truck with Enid and Moloch, surrounded by circling Motorpsychos exactly in this same spot on this same night in September 1969 at...well, never mind.

She realized for the first time in her life that each moment of existence was unique.

She decided to make this moment even more unique.

She picked out one Motorpsycho in particular, the particularly ugly fat and ugly one who had shot out their right front tire with his shotgun.

She watched him as he idiotically roared around the front of the truck, howling and brandishing his shotgun high, so huge and so fat he made his enormous motorbike look small.

He zoomed around to the right and she waited till he reappeared on the left, and then she stared with all the darkness in her soul, concentrating it through her pineal gland and out of her eyes, and just as he came directly ahead his motorcycle leaped up from back to front as if something had stopped the front wheel (and something had) and the Motorpsycho flew high into the air, still gripping his sawed-off shotgun, his massive body turning seemingly in slow motion head over heels, followed by his not quite so massive and cartwheeling Harley-Davidson, as all the other Motorpsychos screeched to a halt, watching man and machine flying and turning in a great high arc.

And then the man, bellowing, like a hog, like a man, his bellow resounding from the great sloping wall of the nearby mesa, fell, followed by his still-roaring chopper, all starkly lit by the gang’s headlights, down toward that broad shallow hollow.

One last fiery burst belched out of the man’s shotgun and then he disappeared into the hollow, his howl abruptly ceasing, and then his motorbike followed him, disappearing also and leaving not the slightest trace in the smooth silvery sand.

(Continued here. Kindly turn to the right hand side of this page to find a presumably up-to-date listing of links to all other published chapters of Larry Winchester’s A Town Called Disdain™, soon to be a major mini-series event on the Sci-Fi Channel, featuring our cover model Barbara Steele as Hope.)

Wonderful! I can not get enough of this.

Hope must be a fun date.