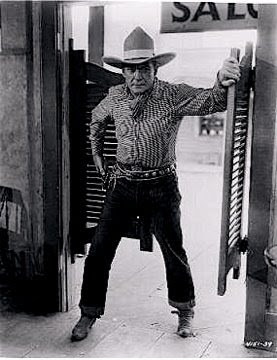 Larry Winchester (“the Shakespeare of our age, but less boring than Shakespeare” -- Harold Bloom) now turns the unsparing lens of his Panavision eye on the rancher Big Jake Johnstone and the town physician Doc Goldwasser, driving across the dark atomic-bombed desert not too many miles from A Town Called Disdain.

Big Jake was scared shitless as he drove the Cadillac slowly nearer to the lights and shooting, feeling like the scared little rich kid he always was deep down -- and not so deep down, either -- and he really wanted just to turn back and go home, or at least go to Burt’s for a beer, or to Mel’s Photographic Arts Studio for a blowjob and a beer, but he didn’t want the Doc to think he was a coward, or rather -- since he knew the Doc knew he was a coward -- put better, he was afraid to act the coward, even though he was a coward. And so one fear outweighed another and here he was acting seemingly courageously while he was damn near shitting his trousers in terror.

The Doc for his part had the opium working well now in his bloodstream and his brain, the weird internal voices and noises had gone away, there was only this world, this life, maybe it would end in a few minutes, maybe it wouldn’t.

Jake stopped the car. They were maybe a half mile from the circling lights and the shooting.

“Y’know what, Doc? Just remembered I got me a pair of bi-noculars in here somewheres. Let’s just take a little gander ‘fore we go any closer.”

Jake popped open the glove compartment, pushed aside the latest issue of Playboy, a couple of packs of Marlboros, three fat joints of fine Panama Red, a half-consumed pint of Old Forester, half a roll of Lifesavers, numerous traffic and parking tickets from other towns that he hadn’t gotten around to getting Sheriff Dooley to fix yet, and finally he pulled out a pair of German army field-glasses, left over from the lucrative Nazi souvenir business he had run back in ’44 and ’45 while posted as a supply sergeant in Paris.

Jake lifted up his hat, looped the binoculars strap over his head, and then pulled his hat back on, tilted a bit to the back. As he put the glasses to his eyes and adjusted the lenses he thought back to those good old days and the fortune he had amassed in girls and in black market goods during the war. Yep, V-E Day certainly had been a cause for celebration for a lot of folks and he had to admit he’d made quite a penny that day himself with his booze concession at the OSS officer’s club, but it had also spelled the beginning of the end of one of the best goddamned money-making set-ups he was ever to have. Why, by May of ’45 he had over a hundred people in his employ, not only regular GIs but deserters, Kraut PWs, Limeys, Frenchies and DPs, and this weren’t even counting a stable of twenty-five to thirty fine fillies of all nationalities and faiths --

“That looks like Miss Enid’s truck. And it’s got them damn Motorpsychos circlin’ around it and firin’ guns like a pack of wild Injuns.”

The Doc sat and watched Jake adjusting the binoculars.

Jake lowered the glasses and turned to the Doc.

“That’s my baby girl in that truck. Her and Miss Enid.”

The Doc just looked at Jake.

The Doc knew that Big Jake did drug business with the Motorpsychos.

“And,” said Jake, “and, and, they give, give, give us any trouble I ain’t, I ain’t ascared to use this-chyere Colt neither.”

He patted the bulge under his arm where the gun was and the Doc saw the sweat staining right through the jacket material.

“All right,” said the Doc. “Let me take the wheel then. I’ll drive, you wave that thing around if you have to.”

And he opened his door and got out of the car and shut the door, then walked around the front, weaving just a little, like a drunk man trying to act sober. He looked very pale in the starlight.

The Doc slid over to the driver’s seat. Big Jake got in the other side, breathing heavy and sweating and licking his lips. The binoculars hung around Jake’s neck, moving up and down with the heaving of his big gut. Jake reached his right hand down past his gut and rearranged his balls. He rolled his shoulders and his head and then took his hat off and wiped his sleeve on his forehead and ran his hand through his crewcut. He lifted the binoculars strap up over his head and shoved the binoculars back into the glove compartment. He tried to shut the glove compartment but part of the strap was still hanging out. He said “Fuck fuck fuck” and pushed the strap into the compartment, then slammed it shut. He sat back and fanned himself rapidly a few times with his hat and then put it on backwards. He took out his gun again and checked the cylinder. His hands were shaking.

“Your hat’s on backwards, Jake.”

He turned the hat around.

“Get your shit together, Jake.”

The Doc put the car in gear.

Jake’s eyes were wide, he was sweating like a pig in the cool air, his teeth chattered audibly.

“Just keep that cannon pointed away from me.”

The Doc stepped on the gas and they pulled out.

Jake squirmed in his seat, holding the pistol with both hands across his massive chest.

“Jake,” said the the Doc, much louder, “point the fucking gun away from me.”

“Woops!” blubbered Jake, “Yes, sir.” He pointed the gun rigidly upward, his elbow against his gut. “Firearm safety! Firearm -- man-stopper! Colt .45. Gun that tamed the wild west. Don’t point it at a man unless, unless, unless -- oh shit. Oh shit, Doc, we gotta stop. We gotta stop, Doc.”

The Doc stopped the car.

Jake pulsed up and down on his seat like an excited sea lion.

“Here,” said the Doc. He took his little brown bottle out of his jacket pocket. “Take a couple swigs of this.”

“It should. I only shit about every other day, myself.”

Jake put his pistol on the dashboard, took the bottle, unscrewed the cap, took three good swigs and then sat back with his eyes closed.

The Doc lit up a smoke and gave Jake a minute.

Up ahead the motorcyclists still swirled around the stopped truck, their weapons flashed and popped into the night, like firecrackers, like guns.

The Doc looked over at Jake. The big man’s breathing had calmed, his eyes were closed, he was no longer streaming with sweat.

“Give me that bottle before you spill it.”

Jake slowly held out the bottle and the cap, and the Doc took them and capped the bottle.

“Don’t mention it.” The Doc put the bottle away in his jacket and put the car in gear again. “All right, Jake, better grab your gun. It’s cowboy time.”

Jake slowly picked his gun up off the dashboard and held it, pointing straight ahead, in both untrembling hands.

(Continued here. Kindly turn to the right hand side of this page to find an allegedly up-to-date listing of links to all other published episodes of Larry Winchester’s A Town Called Disdain™. Stocking up already for next year’s stocking-stuffers? Be sure to buy some Town Called Disdain™ Action Figures, now marked down another 75%, exclusively at Kresges 5&10s. Cash only, all sales final.)

"so one fear outweighed another"

Story of my life, although I've never had to rescue anyone from the Motorpsychos or anything close. Still, I'm afraid all the time, except, except, when Smokey's singing.