“Railroad Train to Heaven”, Part 121: whatnot 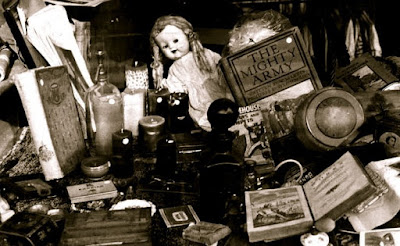 Previously in this memoir, which the noted scholar Harold Bloom has called “the greatest literary work of the 20th Century (not to damn it with faint praise)”, our hero Arnold Schnabel, having run out of the Ugly Mug in order to escape the dreaded DeVores and Miss Evans, meets up with his new friend Dick Ridpath on Washington Street, in the quaint seaside resort of Cape May, on a hot Saturday night in August of 1963...

We were standing near the entrance to a shop called the Whatnot Shoppe. It’s been there ever since I first came to Cape May after the war, but I had never once entered it. (And indeed I’ve hardly ever entered any shop in Cape May or anywhere else except those selling cigarettes, alcohol, or lurid paperback novels.)

Normal people walked back and forth past us, unaware of our little drama.

“I could see Miss Evans was a little wackadoo,” said Dick. “What’s up with these other people -- what’s their name?”

“DeVore,” I said, and just to say the name was to feel as if something were sinking within me. “They’re staying at my aunts’ place, and I’m -- I don’t know.”

“I know what you mean,” said Dick. He took what might be called a contemplative drag of his cigarette, and I wished he would offer me one. “Some people just aren’t happy till they suck the life right out of you.”

I found myself stumbling once again in that never ending search for truth, hacking my way through jungles of falsehood with the dull machete of my conscience.

He took the cigarette from his mouth in an expectant way, smiling just slightly.

“It’s the sanity I’m afraid they’re going to suck out of me, Dick, the last bit of my sanity, and just leave me dribbling -- babbling,” I said. “That’s what I’m afraid of, anyway.”

Dick touched me once on the arm, looking me in the eye, then he tilted his head slightly.

“Yes, and also Larry Winchester, and my, uh, friend Steve, you met him last night, and his friend Miss Rathbone.”

“So -- what were you going to do, Arnold? Just wait out here and see if these people leave?”

“And what if they don’t leave?”

I said nothing. My idiocy spoke volumes for itself without any help from me.

“And how long were you going to wait?” he asked.

As if I had actually given the matter any thought.

I had been facing away from Decatur Street, away from the Ugly Mug.

“The Evans woman just came out,” he said, and he pulled me into the entrance area of the shop, which was set back a bit from the sidewalk.

We looked through the display windows and I could see the warped image of Miss Evans looking from side to side like a hunter as the DeVores also came out of the front entrance to the Mug. The three of them conferred briefly, and Miss Evans pointed up the block, toward where Dick and I hid.

“I hate to say it, Arnold,” said Dick, “but it looks like they might be coming this way.”

“We turn around, stare into the window, try to look invisible.”

We turned, side by side, and by the light of a street lamp we looked into the window display, which contained mostly what I assumed were antiques, or if not antiques then old or old-looking things, but also modern folderol like Slinkys, Play-Doh, and Hula Hoops, as well as little cast-iron toy cars and army men made of painted lead.

Then, to our right, the door of the shop opened, and a little old man looked out. He wore thick rimless eyeglasses of the sort I had only ever seen in movies made no later than 1934.

“May I help you gentlemen?” he asked.

“Actually, perhaps you can,” said Dick. “My friend and I are trying to avoid some very boring people who are coming up the street. Do you think we could come inside for just a moment.”

“Of course,” said the old man.

He stepped back, holding the door open wider. We went into the darkened shop, he closed the door and turned a key in its lock.

“I was afraid you two were casing the joint.”

Despite the warm weather he wore a dark grey three-piece suit. He stuck the key in his vest pocket.

“We’d better move away from the front, don’t you think?” he said.

The shadowy interior was larger than it had seemed from outside, but it was crowded with tables and cases and shelves full of bric-à-brac, not to mention half a dozen old mannequins and tailor’s dummies dressed in clothes no older than the roaring twenties.

“Just stand still,” said the old man. “Pretend to be one of these mannequins.”

He joined us near the back of the store, and we all stood still, impersonating carved blocks of wood.

First we saw Miss Evans, striding purposefully in the vanguard. I noticed she was carrying a large silvery purse that matched her dress.

Miss Evans stopped and looked back over her shoulder.

Miss Evans was now staring into the shop, her head cocked slightly to one side. Then came the DeVores, almost bumping into her.

“So, the famous DeVores,” said Dick.

Now all three of them seemed to be looking into the shop as they talked, although this gazing might have been absentminded, just something to look at while they schemed and plotted.

“Y’know, I think they’ve seen the light of your cigarette,” said the old man.

“Don’t move,” said the old man. “I think their eyes are drawn by the light, but they probably don’t know what it is. It could be a reflection from the street lamp, or a night light. Uh-oh. They’re coming closer. Quickly, follow me.”

He went silently through the shadows to the right rear of the shop, opened a door, turned and beckoned us with one hand.

Dick went first, and I followed him through the doorway and into a four foot passage at the foot of a narrow winding dark stairs with a faint light falling down from above.

The old fellow came in after us and closed the door.

(Continued here. Kindly look to the right hand side of this page to find an allegedly complete listing of links to all other published chapters of Arnold Schnabel’s Railroad Train to Heaven™, portions of which will be read by Mr. Orson Bean next Tuesday evening on Book Chat With James Branch Cabell (featuring the jazz stylings of the Pete Condoli Combo), at 10:00 PM, EST, on the DuMont Television Network.)

Don't go up the stairs!

Up the stairs or out on the sidewalk with the boring ones? I think Dick and Arnold are better off venturing upstairs into the complete unknown.

That Crying Game singer stumped me with his hand gestures and promising to tell the truth. Was he really a woman about to strip in front of the audience, half of whom would gasp in surprise?

"I found myself stumbling once again in that never ending search for truth, hacking my way through jungles of falsehood with the dull machete of my conscience."

You're a great writer.

Arnold suffers for us all, doesn't he? Without knowing it.

I agree!!! Don't go up the stairs!! Besides, I have a feeling the DeVore's are in cahoots with the old man... they're probably already upstairs, just waiting for Arnold.

I also agree with anon. I loved this:

that never ending search for truth, hacking my way through jungles of falsehood with the dull machete of my conscience

I think all of Arnold's fans know that somehow Arnold will just have to go up those stairs.

Yeah, we know he has to, but I also think Arnold knows his fans have to say, "DON'T!!!!" That's just how it works.

Excellent point Jen. It's like we're those little voices in his head...

Stay tuned, you should be able to find out what happens by Sunday or Monday...