“Railroad Train to Heaven”, Part 119: announcement of "some terrific news" 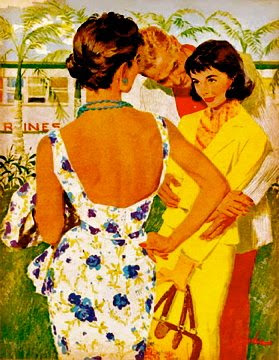 Having successfully resisted the blandishments of that sub-demon Jack Scratch (read all about it here), our hero Arnold Schnabel exits the men’s room of the Ugly Mug (“Where the Élite Meet to Eat in Old Cape May”), on this sultry night in August of 1963...

So eager was I to escape this importunate fellow that, wheeling sharply to the right, I all but galloped (as much as my gimpy leg would allow me to gallop) down that narrow hallway, bursting out not into the barroom but, bewilderingly, onto the teeming sidewalk outside the bar.

Was it it within this Jack Scratch’s power to turn the inside of a bar into the outside of a bar?

I wouldn’t put it past him.

Perhaps after all I had been too hasty, or at any rate too rude. Should I go back and apologize? But, no, he had probably left the bathroom as well. And where would he have gone? Into the bar? But how could he go into the bar if the bar had been turned into the outside of the bar?

Suddenly Steve and Miss Rathbone loomed up towards me, strolling out of the door of the next-door Pilot House, or rather they strolled out first and then loomed up to me (although I didn't notice their leaving the Pilot House until they were actually looming up to me).

They still wore the clothes I had seen them in earlier in the day, Steve in his suit that had now assumed the color and seemingly the consistency of Coppertone suntan oil, Miss Rathbone in her pink dress that had been at least somewhat puffy that afternoon but which had since deflated like popped bubblegum.

They rolled to within four feet of me before either of them appeared to recognize me.

“’Arnold’ I mean!” said Steve, clapping his hand against the side of his head, which caused a cloud of sparks to explode from the other side of his head, a cloud which coalesced into a scintillating teardrop-shaped swarm that swirled once above our heads and then flew off into the night.

And I realized that Steve was indeed Jesus Christ. And yet he was also different from the other Jesus with whom I had already spent so much time today.

And Miss Rathbone for her part, despite her modern clothing, seemed for all the world like Mary Magdalene, radiating humility and love.

“Arnold,” said Steve, “are you plastered or what? Say something.”

And then I saw they were just Steve and Miss Rathbone, or at least provisionally so. And I realized that I was outside the bar simply because I had gone outside the bar.

And then I remembered the mushrooms, Larry’s mushrooms, and I swore, ‘Never again’. I needed no help in being crazy.

“What are you doing standing out on the pavement, Arnold?” asked Steve. “Are you loitering with intent?”

“I went the wrong way coming out of the men’s room in there,” I said.

“Arthur, Arthur, I mean, Arnold, Arnold,” said Steve, “but, say, we were just going in for a cocktail ourselves. Come join us. We have some terrific news to impart.”

“Well, I was already sitting with Elektra and Larry Winchester,” I said, suave as ever.

“Then we’ll join you. Onward!”

He grabbed my arm with a surprisingly strong grip and pulled me in, Miss Rathbone tagging along behind us.

The next several minutes swirled by in a blur of greetings, of people getting up and shaking hands and kissing cheeks, the loud jazz music and the chatter and laughter of other people swirling through all of it. Jack Scratch was now sitting at the bar, and in fact was engaged in what appeared to be an intense conversation with the now awakened St. Thomas Becket. I tried to stand out of the way, especially that of a waitress who kept trying to get past us, and who, finally, after having a ten-dollar bill pressed into her palm by Larry, quickly cleaned off a just-vacated booth and installed in it the five of our little group. Larry sat on the inside, facing the band, who were playing, “What Is This Thing Called Love”, I sat next to him; Steve sat facing Larry on the other side, with Miss Rathbone squeezed in next to him, and Elektra next to her.

As soon as we ordered our drinks -- it had now become Manhattans all around -- Steve lit up a cigarette and declared that he had an announcement.

“Charlotte and I are going to be married!”

I glanced at Elektra, and at Larry, and they both had that expression which seems to say, “Is this a joke?” From Miss Rathbone’s (Charlotte’s) expression, the answer might well have been Yes, don’t worry, it’s a joke, and that could easily have been what Steve’s beaming smile was saying also.

“Oh, right. We’re getting married. What the hell!”

“And she said yes?” asked Larry.

“She said what Charlotte just said: ‘What the hell!’”

“Steve, are you pulling our legs?” asked Larry.

“And to you, too, Charlotte,” said Larry.

What else could I say?

“Sure, Steve,” I said. "I would be honored. And my congratulations to you both."

I felt something on my knee. I looked down but it was okay, it was only Elektra’s hand, reaching under the table to give me a reassuring pat.

“I couldn’t help but overhearing,” said the little man, Jack Scratch, who was suddenly standing at our table, bowing and smiling.

“You must have the ears of an elephant,” said Steve.

“I have very acute hearing,” said Jack Scratch. “And my friend and I --” he gestured over to the bar, to St. Thomas Becket, who smiled and waved at us -- ”my friend and I would like to send you over a bottle of champagne.”

A confusion of introductions ensued, and even Thomas Becket came over and shook hands with everyone. Both he and Jack Scratch introduced themselves to me in that way people do when they’re not entirely sure if they’ve met you before, or, if so, if you remember having met them; or perhaps in that way people shake hands with you when they want others not to know that you’ve met, or think that you might not want others to know about it. Or perhaps I was reading too much into it all.

One thing I did notice, the names of these two had changed. I didn’t quite catch the names they gave but I’m pretty certain that these were not St. Thomas Becket and Jack Scratch.

“So when is the happy day?” asked Jack Scratch (I’ll call him that for the time being.)

Both Steve and Miss Rathbone looked at him blankly, and then Steve said, “What happy day?’

He was leaning forward, I suppose to hear and to be heard better. I noticed that the top of his head was sliding forward again.

"As soon as possible, Steve," she said, "before I change my mind."

“That’s wonderful,” said Jack Scratch, and for the first time I noticed two small bumps on either side of his round little forehead.

And I thought, where was the world coming to if martyrs and devils consorted in bars? Or where had the world already gone, or perhaps always been?

And then I saw an awful sight.

Across the bar I saw Mr. and Mrs. DeVore, coming into the barroom by the side entrance, wide-eyed, their heads swiveling back and forth like the turrets of two implacable Tiger tanks.

(Continued here. Kindly look to the right hand side of this page to find a soi-disant complete listing of links to all published chapters of Arnold Schnabel’s Railroad Train to Heaven ™, soon to be serialized live on the Kresge’s 5&10 Dramatic Showcase hosted by Tommy Noonan, on the DuMont Television Network.)

Fun, fun, fun. And doesn't Arnold handle his drugs with aplomb?
Of course, he communes with Jesus whenever Our Lord takes the notion. And, after imbibing a few beers, he's ridden the high seas with Proust and Toulouse accompanied by Dick Ridpath. What when that now? Just yesterday?

Why do I get the feeling the wedding will take place many months from now, but it will still be the same sultry day in August... :)

Also, I wonder who fills Arnold with more terror... the DeVores or Mr. Scratch??

Kathleen, I know, it's hard to believe, but Arnold's trip back in time to Proust and Toulouse-Lautrec took place only on the previous evening. I wish my days were as full as Arnold's...

Jen, if I had to make a bet, I think Arnold is more afraid of the DeVores than of Jack Scratch. With good reason.