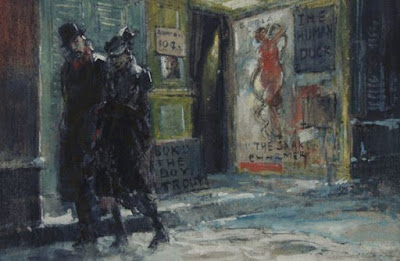 Tonight was the night.

The night when Billy Baskins would officially begin his career as an elegant international assassin. The Marie dame had told him that her husband Jerry was taking her to Bob’s Bowery Bar that night for dinner and drinks for her birthday, and that Jerry would get roaring drunk the way he always got when he went to Bob’s. When they left the bar, which probably wouldn’t be until Bob cut Jerry off, they would turn left on the way to their trap up the block, and all Billy had to do was wait in the alley next to Bob’s and then do the deed. It would look like a robbery, and that’s what Marie would tell the cops. Besides the fifty bucks Marie had promised Billy, she told him he could keep whatever money Jerry had left in his wallet, if he had anything left.

Billy got to Bob’s early, and, sure enough, after a while Marie came in, with her husband, or at least Billy assumed he was her husband. He was a big guy, and a loud guy. Billy didn’t mind that he was loud so much, but the big part gave him pause, because Billy didn’t have a gun. He would really have to find a gun for his next job, but right now all he had was his old pen knife, and the more he thought about it, the more he thought the pen knife might not do. He would have to find some other way to bump off the guy. Well, nobody ever said being an assassin was going to be easy. He would just have to find a way.

Billy was drinking the house bock, but he tried to drink slow. He didn’t want to get too drunk, not for his first “hit”. He was sitting on the other side of the corner down at the end of the bar, where he could keep an eye on Marie and Jerry, who sat about midway at the bar. Marie and Jerry drank, and laughed, they ate. It looked like they were going for the Wednesday night two-for-one hot dog special. Marie ate four of the dogs, her husband Jerry must have eaten a dozen of them before he was through. Billy got hungry, so he had a couple of the dogs himself.

The hours went by. Marie and Jerry drank, and laughed. They sure didn’t look like a couple that didn’t get along, but, who knows, thought Billy. People were weird. They were weird back home in Wheeler’s Corners and they were weird here in the big city.

When would Marie and Jerry leave? Despite himself, and despite the fact that he tried to pace himself, Billy realized he was getting drunk. Finally, he nodded off, and he was awakened by Bob rapping that Marine Corps ring of his on the bar top.

Billy looked down the bar. Marie and Jerry were still there, thank God.

“Sorry!” he said to Bob. He glanced down at the change in front of him, separated two quarters and shoved them toward Bob, and pocketed the remainder.

“You’re welcome,” said Billy, with his small-town politeness, and he quickly climbed off his bar stool and staggered out.

He turned left outside the bar, and there was the dark alley. Now he just needed to find something to bump off Marie’s husband with. He rooted around in the darkness, and he found quite a few empty beer and wine bottles, but he figured he needed something more lethal, and finally he found a pile of rubble with some bricks in it, and he picked out a nice one. This would do, this would do just fine. He went back to the entrance of the alleyway and waited. He got sleepy again, so he sat down with his back against the wall, with the brick on his lap. Fortunately, this was the Bowery, and there was nothing unusual about a man sitting in an alleyway.

He would just rest his eyes for a minute.

Suddenly he started awake again. It was those voices, the loud, laughing voices of Marie and Jerry!

Billy shook his head the way a dog does when it wakes up, and he pulled himself to his feet. The voices got louder. He had the brick in his hand. He heard the voices, the laughter, getting louder, coming closer to the entrance to the alleyway.

It was now or never. Billy raised the brick high and as the man and woman staggered arm in arm past the corner of the alley Billy brought the brick down as hard as he could.

And he smashed the skull of poor drunk Marie.

What could Billy do? One thing he had learned from his magazine stories was that a professional assassin always completes his contracts, so he raised the brick again and brought it down on the big man’s head.

Billy walked away, as quickly as possible without running, and it wasn’t until he reached the end of the block that he remembered to drop the brick.

His first job, and he wouldn’t make a dime from it, but at least he had gotten his feet wet. Next time he would try to do better.


– The Last of the Elegant International Assassins, by Horace P. Sternwall, a Midway Books “paperback original”, 1952; one printing, never republished.
Posted by Dan Leo at 1:12:00 PM