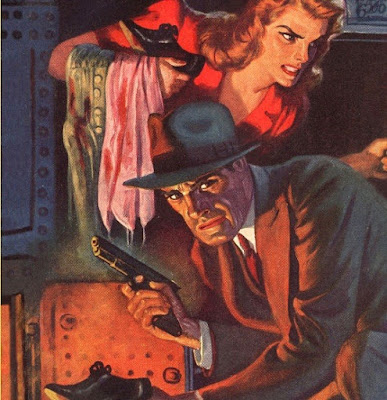 “My name is Joe, and I am a burnt-out detective.”

I paused before continuing, staring out through that thick cloud of cigarette smoke at all these other detectives in this church basement in a poor neighborhood, a neighborhood from the mean streets and alleys of which I had myself crawled out of, so many years ago. Or had I ever really left?

“I have tried,” I said. “To do right. Like one of those knights of old I guess you might say. What did they call them?”

“Knights errant,” called Bradley, who was a nice guy, but he did like to show off his knowledge.

“Right,” I said. “Like a modern-day knight errant. But what has almost twenty years in this profession got me? A world-weariness that I carry around with me like a hundred pound sack of potatoes, and a three-pack a day habit of these –”

I held up the stub of the Philip Morris Commander I had been smoking, and dropped it to the floor. I stubbed it out with my worn brown brogans, which needed a shine, badly.

I reached into my suit coat (off the rack, Macy’s) and brought out a pint of Old Crow.

“And a pint-a-day habit of this stuff,” I said.

I put the pint, which was only one-third full, back in my suit-coat pocket.

I let them settle down, took out my cigarettes, shook one out. Lighted it with a hotel match.

“Do I even have to mention the adolescent daughter?” I said. “A daughter I don’t know how to be a father to?”

Nobody said anything, and I suspected I had really struck a chord this time, and that every one of these guys had daughters they didn’t know how to be a father to.

I went on, and, six cigarettes and a half-hour later, I felt as if I had said enough, more than enough, and yet not nearly enough. For this time.

“So I guess that’s all I got to say for now,” I said. “And I want to thank you guys for listening.”

Everybody clapped, and I went back to the semi-circle of folding chairs and sat down. The guys on either side of me patted me on the back.

“Thank you, Joe, for sharing,” said the thin man. “Who would like to speak next?”

A beat-up looking guy in his fifties raised his hand, and he shuffled up to the podium with his paper cup of coffee and his cigarette.

“My name is Jack,” said the beat-up guy. “I am a burnt-out detective.”

“Hi, Jack” said a dozen rough voices, the voices of men who had seen too much, done too much, and yet who had done far too little.


The Burnt-Out Detectives Group, by Horace P. Sternwall, an Ace Books “double”, published in tandem with Diary of a Hop Head, by Herman P. Sherman (Horace P. Sternwall), 1954; out of print.
Posted by Dan Leo at 12:11:00 PM

This is a thing of beauty.