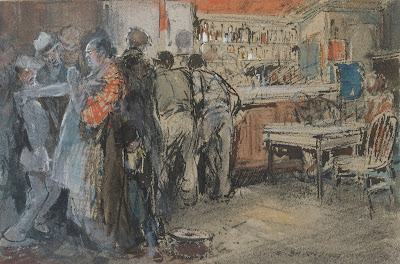 Everybody’s got to croak sometime, and after sixty-three years of drinking, smoking, eating, whoring, roaring, sleeping and dreaming and doing it all again, finally cirrhosis of the liver took Michael J. “Mickey” Finn one cold day in the charity ward of Bellevue Hospital.

Much to his surprise he found himself at the bottom of the hill at the top of which stood God’s house.

“Well, here goes nothing, Mickey,” he said to himself. “Let’s get this over with.”

He walked up the winding brick path and up onto the porch where St. Peter sat at a little table with his great leather ledger.

St. Peter took his time, lighting his pipe with a kitchen match, and slowly paging through the enormous ledger.

“Nice day, ain’t it?” said Mickey. “Cool, but not too cool, like jacket weather.”

St. Peter wore an old, colorless canvas jacket. Looking down at himself, Mickey was glad to see he was wearing his favorite old grey flannel suit, Brooks Brothers, bought at the Goodwill for five bucks in 1937. It had been several sizes too large for him at the time, but with his diet of bock beer and hot dogs he had grown into it over the years.

“What, are you reading about me in there?”

“Are you kidding me?”

“You sure you got the right Michael Joseph Finn? It might be some other guy’s life you’re looking at there.”

“Hey, St. Peter, you try working one of those stupid jobs all day. Suck the life right out of you.”

“Excuse me, Peter, but man to man, hey, it takes two to tango, you know what I mean? Those four broads all knew what they was in for. I never claimed to be no Ronald Colman.”

“What does that even mean?”

“The sheer number of hours of your life you spent drinking in bars, particularly this ‘Bob’s Bowery Bar’.”

“Yeah, that was my regular stop, I’ll admit, ever since back when it was a speak. Good joint. And that Bob, he runs a taut ship, y’know? Anybody causes any trouble, you’re out on your ear.”

“So this was your life. Drinking. Smoking. Working as little as possible. Avoiding responsibilities.”

“Hey, I never said I was perfect.”

“I can’t even look at this anymore,” he said, and he closed the book. He drew on his pipe, but it had gone out. He tapped the dead ashes into a big glass ashtray.

St. Peter sighed again, but said nothing. He began to refill his pipe from a worn old leather pouch.

“Okay,” said Mickey. “I’m gonna take that as a yes. Number one, I never killed nobody. Number two, I never hurt nobody. Number three, whenever I had a few bucks to spare, I would give it to one of them dames that I knocked up and tell her to buy the kid a toy or something. Number four – well, I guess there ain’t no number four. All I got to say is nobody’s perfect and I never said I was. And if that’s a crime, well, okay, do what you gotta do.”

St. Peter lighted his pipe with a kitchen match, and looked out over heaven and all creation.


Mickey was led through a series of large rooms and long corridors and finally into a barroom not unlike Bob’s Bowery Bar.

“Sit anywhere you like,” said the docent, “and a server will be right with you.”

Over at one end of the long bar, Mickey saw some of the late-departed old gang from Bob’s: old mushmouth Joe, Gerry “The Brain” Goldsmith, Fat Angie the retired whore, George the Gimp, the old guy they called Wine, Tom the Bomb.   He squeezed in between old Joe and Gerry.

“You?” said Gerry. “This joint is going downhill.”

What did he care? He had made the grade. By the skin of his teeth, but he had made it.

He ordered a bock.


– Nobody’s Perfect, and Other Stories of the Forgotten Man and Woman, by Horace P. Sternwall; a Pyramid Books “paperback original”, 1954; out of print.
Posted by Dan Leo at 2:17:00 PM