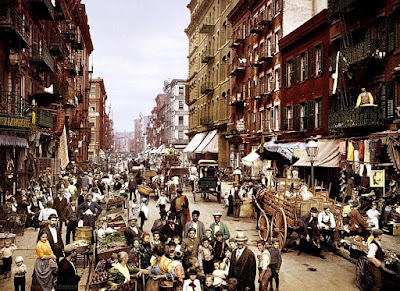 Most career marines talk about opening up a bar when they retire from the Corps, but Bob knew that most of these guys wound up sitting in bars owned by somebody else for the rest of their lives until the cirrhosis retired them for good.

Bob was different. After twenty years in the Corps and serving everywhere from Veracruz to Belleau Wood and from Port au Prince to Shanghai, he retired at the age of thirty-eight and actually opened up a bar.

The year was 1930, the Depression had hit the real estate market hard, and so for a thousand bucks cash on the barrelhead Bob was able to pick up a speakeasy right off the corner of Bleecker and the Bowery, and the previous owner threw in the four-story building it sat in to boot. Bob got to work with hammer and nails and paint, and after two months he opened the joint up for business, with his specialty being a strong dark bock beer he brewed himself in the basement.

At first the place didn’t have a name. It was just another speak with no sign out front, and people called it “the marine’s bar”, or “that new speak off Bleecker”, but after people got to know Bob they started calling it “Bob’s Bar”. When Prohibition was repealed and Bob finally opened up legally, there seemed no question but to call the place Bob’s Bowery Bar. For years there was still no sign, but then finally around 1950 Bob broke down and had a neon sign put in the front window:

Bob’s was never a typical Bowery dive, because Bob was not a typical man. Sure, most of his clientèle were Bowery bums and layabouts, but you would also find poets and novelists, lots of hack pulp magazine writers, actors, musicians, academics, and people of professions unknown. Bob turned away no one who had the price of a glass of his famous basement-brewed bock. Negroes and Chinamen, Jews and Catholics, communists and right-wing zealots, Bob let anyone in, as long as they were eighteen years old and behaved themselves. Get out of line though, and Bob would rap his Marine Corps ring on the bar once. He never had to rap it more than once, because you either behaved or you were sitting on your ass on the sidewalk outside.

Bob’s physical strength was the stuff of legends, and nobody really knew how he stayed in such great shape, but all anyone did know was that he carried one of those fifty-gallon kegs of bock up from the basement on his shoulder and set it down behind the bar as gently as if it were a barrel made of thin air containing nothing but air. Maybe carrying those kegs up from the basement was how he stayed in shape, that and arm-wrestling, because Bob had a standing offer to buy a drink for any man who could beat him at arm-wrestling, right or left arm, it didn’t matter to Bob, and he had never lost once. Come to think of it, maybe another way Bob stayed in shape was throwing people out of the joint. It was nothing for Bob to knock out a two-hundred-and-fifty pound stevedore with one punch, then haul the bruiser up over one shoulder and carry him out and through the door where he would unceremoniously dump the poor lug on the sidewalk.

Bob was a bachelor, and a confirmed one.

Nobody could answer those questions.

“But what about children?” said the Gerry “the Brain” Goldsmith one afternoon, even though the Brain had never had any children himself, and in fact was still a virgin at the age of forty-eight.

“What about children?” said Bob.

“Wouldn’t you like to have some?” said the Brain. “Some children to carry on the great Bob legacy?”

Bob stared at the Brain, and took out a Parodi. He lighted it up, and then and only then he spoke.

“Y’know, Brain, for a guy they call the Brain, you say some pretty asinine things sometimes.”

Everybody laughed, including the Brain, and Bob looked at them all.

Over there at the four-top by the door were some of the poets: Scaramanga the leftist poet, Lucius the Harlem poet, Seamas the Irish poet, Hector the doomed young romantic poet.

At the round-top sat some of the show-biz regulars, killing the time before their evening shows: the actress Hyacinth Wilde, the actor Angus Strongbow, the playwright and director Artemis Boldwater, that up-and-coming canary Shirley de La Salle and the Hotel St Crispian’s bandleader Tony Winston…

Sitting by himself and quietly scribbling in a schoolboy copy book was goofy Pete Willingham, who had been surprisingly well-behaved after his last stay at Bellevue. Maybe that lady shrink Dr. Weinberg had done him some good after all, or maybe it was the fact that Pete had become a devout convert to Trotskyism as well as to Roman Catholicism. Who knew?

Janet the waitress chatted with some other regulars seated by the door with a pitcher of bock. The four rumdums at the table were happy just to look at her, and who wouldn’t be?

“Who needs children?” said Bob, as if to no one and everyone.

For some reason the crowd at the bar stopped laughing and talking, and they all looked at Bob.

Everyone here, all of them, these were all Bob’s children.