"Our Lady of Sorrows" 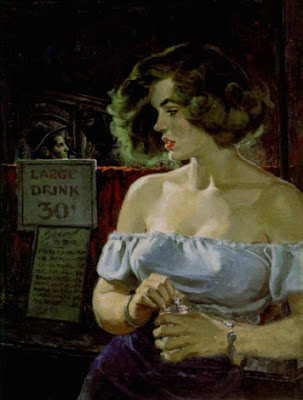 Wendell admired the silent and solitary dark-haired girl in Bob’s Bowery Bar for an entire summer and autumn and the beginning of winter before he almost got up the nerve to say a word to her.

She stood out like a sore thumb amidst the dregs of humanity that made up the rest of the clientèle of the bar. No, that was a poor image; everyone else in the place was a sore thumb, and she was the one perfect thumb: another poor image, but, alas, Wendell could summon up nothing better. It was this difficulty in casting the tumultuous chaos of actual life into words which made the writing of Wendell’s epic poem such an impossible task.

She wasn’t there every night, and Wendell knew she wasn’t because he himself was there every night. He would come home from his dreary job at Amalgamated Public Relations, he would work on his poem for an hour, and then, exhausted, he would grab a book or a magazine and stagger down the four flights of stairs and then around the corner to Bob’s where he always ordered the same thing, a glass of the house bock beer that Bob brewed in the basement. The bock was rich and dark, full of the flavors of an eternal rainy day in early winter, barely carbonated, and tasted just as good after you had nursed it half an hour and it had gone completely flat.

When the dark-haired beauty did come in, she always sat alone, at the bar, and she always read a book, or a magazine or paper. She wore glasses to read, and sometimes she took them off, rubbed her eyes, looked about her with an impassive expression, then replaced the glasses on her nose and resumed her reading. Wendell couldn’t be sure, but it looked as if her regular drink also was the house bock.

One evening Wendell dared to ask the waitress Janet about the mysterious young woman.

“What do you want to know?” said Janet.

“What do you know about her?”

“Are you in love with her?”

“How can I be in love with her if I’ve never spoken to her?”

“All I know is her name is Lisa, she always sits alone and reads a book, she doesn’t talk to anybody, and if anyone tries to bother her, Bob just raps that Marine Corps ring of his on the bar top and tells them to leave the lady alone. He don’t want to lose the one classy female regular he’s got, y’know?”

“Would Bob tell me to leave her alone if I tried to talk to her?”

“Not if you’re not a jerk about it. Give it a try, Wendell.”

“You really think I should?”

“What do you have to lose, except maybe your pride if she tells you to leave her the hell alone?”

It just so happened that when he came into the bar that evening the only empty bar stool was directly to the left of the beautiful young woman.

As usual, she was reading. It was Daniel Deronda, by George Eliot.

Here was an opening. He could ask her about Daniel Deronda, a book which, by the way, he had never read. But first he had to prepare himself. How to phrase his opening line? How’s your book? No, that was lame. There must be a better way. He had been so tired that he had forgotten to bring a book or magazine or newspaper with him, and he felt horribly exposed. He could never understand how people could go into a bar with nothing to read, just staring at the rows of bottles behind the bar, or into the mirror on the wall above the bottles, staring into one’s own lugubrious and pathetic face…

“Uh, no,” said Wendell. “I was so tired tonight that I forgot to bring something to read, and I was just thinking about how I can’t understand how people can sit in bars without anything to, you know –”

“I’ve noticed that every time I’ve seen you in here you’ve had your nose buried in a book or a magazine.”

“Me too. I live with three noisy girls who do nothing but chatter and play the radio or the record player, so I come here to read in peace.”

“Well, I have no roommates, but I come here anyway, just to get out of my apartment.”

The ice had been broken.

Wendell was an unobservant Presbyterian and Lisa a fallen-away Catholic, but for her mother’s sake they were married, the following June, at Our Lady of Sorrows over on Pitt Street.