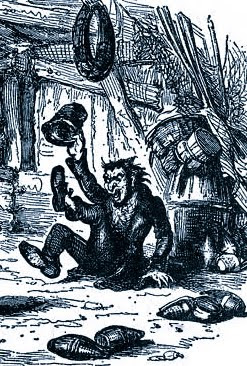 Once again our hero Arnold Schnabel has succeeded in thwarting the prince of darkness; now it only remains for him somehow to return with his companion the ancient Mr. Jones from the fog-shrouded island of lost souls to the land of the living… (Click here to read our previous thrilling episode; the bold of heart may go here to return to the very beginning of this Gold View Award©-winning 69-volume masterpiece.) “How well I remember that first day, when, browsing idly through the dusty basement shelves of Leary’s Book Store, I first came across the name of ‘Arnold Schnabel’, in Horace P. Sternwall’s delightful but little-known memoir Crazy People I Have Known, Vol. III.” -- Harold Bloom, in Collier’s.

The door closed behind us, and as it did the raucous shouting and laughter within as well as the beautiful music withdrew and became muffled.

The fog had grown heavier, the night darker and with it the fog. The only illumination nearby was that of the bar’s electric signs, red and orange and yellow:

Lucky was nowhere to be seen. He had gone back to hell, or if not to hell then someplace other than here, and that was all that mattered to me.

Mr. Jones flicked his cigarette butt away, it disappeared in the fog like a tiny rocket ship passing into another dimension, leaving behind a trail of glowing orange ribbon which slowly disappeared into that other dimension as well, as if someone were pulling it away.

"Here, hold my quart of beer for me a second, will ya, Arnie, while I light me a fresh smoke."

He held out his quart of beer in its paper bag, and I took it.

“What was the story on that dude in there, anyway?” he asked. He took another cigarette from behind his ear, drew it under his nose and made a face. “That guy Lucky or whatever his name was. What was his fucking problem?”

“Oh. You’re not going to believe this,” I said. “But apparently he’s the Devil.”

Mr. Jones removed what looked like a piece of dried dung from one end of the cigarette, which I believe was one of the Soviet-made ones he had gotten from Finch. He flicked the dung away.

“Trying to drag you down to the pits of hell, huh?”

“He sure left with his tail between his legs though.” He put the cigarette in his thin old lips, and took a book of matches out of his suit-jacket pocket. “What did you do to him, anyway?”

“I invaded his brain. Told him I wouldn’t leave it unless he agreed to go away and leave us alone.”

Mr. Jones lit his cigarette with his Sid’s Tavern matches. The smoke he exhaled smelled of burning compost, of an old cloakroom filled with damp galoshes and old woolen coats, and the smoke lost itself in the dark fog that surrounded us.

“Once again you surprise me with your powers, Arnold.”

“I surprise myself,” I said. “But I think the LSD may have helped.”

He tossed the paper match away into that thick dark billowing fog, into that other dimension. He held out his hand for his quart of beer and I handed it back to him.

I paused only briefly.

“An idea you think.”

“Back to the river.”

“Yes. It’s out there somewhere in this fog.”

“It shouldn’t be far,” said Mr. Jones. “By the way, are you comfortable just wearing that polo shirt and Bermuda shorts?”

“I’m vaguely aware of a pain, now that you mention it, but the ache seems very far away, as if it’s a pain in some other person’s leg. Or as if the pain is so far away now that it gave up halfway on the way to my brain, and went to sleep. ”

“So the LSD is still working.”

And off we trod, into the fog, along those damp and barely visible cobblestones.

We hadn’t gone too far when I tripped over something, at first I thought it must be a dead dog. The something gave a yelp, and I thought it must instead have been a sleeping dog. I stumbled over it with an awkward hop but I managed not to fall.

I turned and looked. It was Sid the Shiv, trying to push himself up from the pavement with his one good arm, and groaning.

He had got himself into a sitting position now, his thin short legs outstretched, his broken right arm hanging at his side. His sharkskin zoot suit was filthy and damp, his pompadour hopelessly deflated, his greasy hair lying down over his pale face like strands of dark seaweed.

“You saw me get me arm broke by that white-suited bastard. And I was only lying here on these wet hard rocks passed out from the ensuing agonizing pain until you woke me up by brutally kickin’ me in the spleen. Now what do you think, genius? Do you think I’m okay?”

“What’s that you got in them paper sacks,” he said.

I turned to Mr. Jones.

“You’re offerin’ me a quart of beer?”

“Arnie,” said Mr. Jones. “You forget this bum tried to rob us. And then attempted to slice you up you with a straight razor.”

“And got me arm broke for me trouble!” said Sid.

I bent over and proffered the quart in its bag, making sure however not to get close enough for Sid to take a stab at me with some other weapon he might have secreted on his person.

He took the beer, with the small dirty hand at the end of his one good arm, and he stood it on the cobbles between his broken arm and his scrawny hip.

“What’re you, writin’ a book? Don’t you worry if I got an opener. You let me worry about that.”

“I had twenty-two bucks in me wallet before you head-butted me back there. When I came to me senses me wallet was lying on the pavement and it had no dollars in it. Plus me imported Wop flick knife was missin’.”

“Okay,” said Mr. Jones. “I want you to listen very closely to me, Artful Dodger: fuck you. I took your knife and I took your twenty-two bucks. Consider it a cheap price to pay for trying to highjack us.”

“Yeah, but you forget, pops, I also got me arm broke,” said Sid. “You keep forgettin’ that.”

“But still it’s broke. How am I gonna make a living with a broke right arm?”

“You are a very cold old man,” said Sid. “How about just givin’ me a tenner back, and me knife?”

“Okay, keep the blade then and just give me a tenner. That’s more than fair.”

“I’m not giving you one red cent.”

I took out my wallet and looked in it. I still had the ten Mr. Arbuthnot had given me to buy seafood with as well as nine dollars of my own. I took out the nineteen dollars and put my wallet away.

“Here,” I said, extending the money, but keeping my distance.

After staring at the money for a moment, maybe wondering if I was pulling some kind of trick, Sid took the bills, and with his one good hand his fingers dexterously fanned them so that he could count them.

“All right,” he said. “I’ll settle for the nineteen.” He folded up the money and shoved it into his inside jacket pocket. “But you,” he said, pointing at Mr. Jones, “you’re on me shit list, gramps.”

“I wasn’t talking to you, granddad,” said Sid.

“We’re trying to get back to the world of the living,” I said.

“Hey, don’t sweat it, hooligan,” said Mr. Jones. “We got the okay from St. Peter himself.”

There was an awkward pause here. Finally:

“He means a cigarette,” said Mr. Jones. “He wants us to give him a cigarette.”

“I only got two left after this one.”

“Don’t put yourself out on my account, you mean old bastard,” said Sid.

He reached into his shirt pocket, took out a cigarette and tossed it at Sid, who grabbed at it but missed. It went flying a few feet away, disappearing in the fog. I went over after it, and, bending over, I found it in the crack between two cobblestones. I picked it up, went back and handed it to Sid.

“Still got me Ronson,” he said, taking out a scuffed gold lighter. “Nobody stole this from me yet.”

“As if you didn’t steal it from some other joker,” said Mr. Jones.

“Thin ice, gramps,” said Sid. “Very thin ice you’re walking on.” He lit the cigarette, exhaled, coughed, spat. He put the lighter away and took another drag on the cigarette. “Fag tastes a little like sulfur.”

“I got it from the Devil himself,” said Mr. Jones.

He stared off into that dark fog, smoking and not looking either at me or Mr. Jones.

After another uncomfortable pause, Mr. Jones and I turned and headed off into the fog.

It was Sid’s voice.

I turned. I couldn’t see him through that dark fog.

“What’d I just bleedin’ say? Yes! Go to the left! Till you get to the river wall.”

“Fucking Christ,” he called back.

I looked at Mr. Jones through the trailing wisps of dark fog. He shrugged. I called out again:

“Fuck you!” came Sid’s voice out of that thick foggy darkness.

I turned to Mr. Jones.

He put his arm in mine and we turned left into the fog and the darkness.

(Continued here, and ad infinitum et astram.) (Please turn to the right-hand column of this page to find a listing of links to all other legally-available chapters of Arnold Schnabel’s Railroad Train To Heaven©, and be the first kid on your block to subscribe to Arnold’s adventures on your Kindle!) 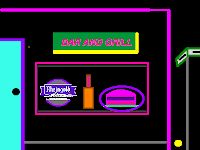 (Go here for the complete thrilling episode!)
Posted by Dan Leo at 6:32:00 PM No comments: Links to this post