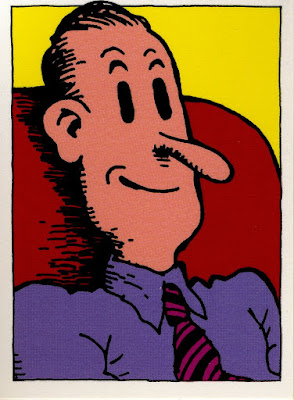 Let us rejoin our heroes, anti-heroes, and assorted featured players on a day in September, 1969, at the hospitable Johnstone Ranch (“Reasonable Rates For Folks Who Hanker For a Taste of the Real Old West”), not very far from a town called Disdain...

(Go here for our previous chapter, or here for the first chapter of this Gold View Award©-winning yarn from Mr. Larry Winchester. “...like Cormac McCarthy but without the big words.” -- Harold Bloom.)

That morning a great dust storm blew up through the area but then it passed and the day opened up bright and clear and warm and everything seemed like you could reach out and touch it.

Everyone had a good long sleep and after people finally started waking up that bright afternoon they all sat around the parlor drinking tea and eating little burritos made with the leftover barbecue meat.

Jake was nice enough to give Brad one of his old western suits to replace his bloodstained one, and Dick gave Mr. MacNamara a nice grey serge number from Hawkes of Savile Row that was a tad too small but still better than the bullet-ridden and gory jacket and trousers he had been wearing.

Buddy wound up in some old ranching clothes of Ed Harris the foreman’s.

Harvey drove Cleb and Attie home in the green Corvair, and he stayed for dinner out at the Parsons spread.

Buddy spent part of the afternoon working on Paco’s station wagon and sure enough he got it running again. Paco bade a fond farewell to one and all and drove back to the reservation.

Jake sent Tip Bullock out to Enid’s truck with four spare tires. The Doc and Enid drove out with him, and after they had changed the tires Enid and the Doc drove back on in to Disdain together.

Dick and Daphne had a talk with Jake over cocktails, and Jake said he thought it’d be a damn swell idea for Hope to take a trip to Europe with them. That Albuquerque head-shrinker had advised that she hold off college at least till next January. Well, Jake was no head-shrinker but maybe a trip like this was just what she needed. Get her out in the world a mite, do her a world of good; then if she wanted she could start college in January or even the following fall. Truth to tell he was thinking it’d be nice to be able to bring a señorita or two home now and then and not have to worry about corrupting Hope. Not to mention let someone else take care of her whenever she had one of her little nervous breakdowns.

****
That night Dick and Harvey had a little chat on the front porch, sitting side by side on a couple of wicker rocking chairs with a stand-up ashtray between them. Dick asked Harvey if he would like to come along with him and Daphne and Hope. Their plan was to drive the Thunderbird back to Frisco and drop it off for Dick’s friend Huey, then take a plane to Philadelphia, have a brief visit with Daphne’s grandmother in Cape May, and then on to New York and finally to Europe. Harvey said thanks but he reckoned he’d hang around here for a little while, maybe work on the ranch if Mr. Johnstone would give him a job.

“Yeah, I guess so. Not just yet anyway.”

“Yeah. I mean, not necessarily with us.”

“She won’t leave. She wants to stay with her old man and her brother.”

“They all got radiation poisoning. Each other’s all they got. I’ll hang around a month or so, then I guess I’ll be movin’ on.”

Dick sort of wanted to reach over and put his hand on Harvey’s shoulder, but, well, no, better not. Instead he took out his last joint. He’d been thinking of saving it for the road, but, what the hell, no time like the present. He handed it over to Harvey and lit him up with the trusty old Ronson. Harvey toked deeply several times and then passed the joint to Dick.

“You wanta hear my theory, Mr. Smith, I mean Ridpath?”

He still hadn’t let out the smoke. These kids today were pros.

Harvey let out the smoke, a great redolent cloud in the crisp cool desert air.

“I think we invented them outer space guys.”

Dick toked deeply, held it in, and exhaled slowly.

What was the word --

Actually Dick was thinking more along the lines of preposterous.

Harvey passed him back the joint, exhaling another great cumulus cloud of smoke.

He gave the joint back to Harvey.

Harvey stared at the joint.

(Click here for our next fabulous episode. Kindly look to the right hand side of this page for what might sometimes be an up-to-date listing of all other available chapters of Larry Winchester’s A Town Called Disdain™, recently shortlisted for the Kilgore Trout Memorial Award for Vaguely Scientific Fiction.)

“Don’t -- try to make too much sense of life. Don’t -- fall into that trap.”I wish I had listened when people were kind enough to tell me this, although probably not so neatly.
Yet even now, when I know Dick's right,I can't help myself. I'm forever trying to make sense.

"We had to invent ‘em, ‘cause we ain’t never satisfied with what we got."
Ain't it the truth.

Yes, Harvey has his philosophical moments...