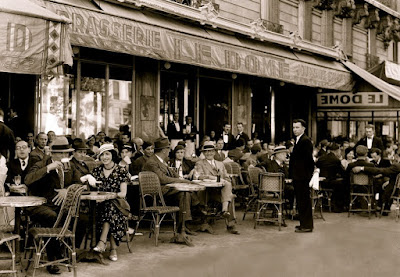 Our previous episode found Dick and Daphne re-united by chance, after almost two decades, with the no-longer young Harvey (with his eighteen-year-old daughter, Heather) in Paris, in the summer of 1988...

(Click here to start at the beginning of this Gold View Award©-winning masterpiece from the battered Smith Corona portable of Larry Winchester, “The last of the giants.” -- Harold Bloom, on The Charlie Rose Show.)

We had been sitting outside the café for almost an hour after lunch, and Daphne and Heather were really hitting it off, just chatting away. I had fallen into a contented fade-out, sipping my beer and smoking a cigar, watching the people go by in the sunlight.

Then Dick leaned over toward me and said in a low voice:

“Except for the braces on her teeth,” I said.

“Excuse me for asking, Harve, but -- you’ve never gotten married?”

“I’m seeing a woman back in L.A. It looks like we’re headed in that direction.”

Right about then a very handsome and tall young guy wearing a backpack over one shoulder came strolling up to the table. He looked like an Italian soccer star.

He bent down and he and Daphne kissed each other French-style on both cheeks. Then he punched Dick on the shoulder American-style and Dick feinted with a left and punched Rafael with a right to his shoulder.

“Rafael,” said Daphne, “I want you to meet one of our oldest friends and his simply stunning daughter: Harvey and Heather.”

I shook Rafael’s hand, which was about twice as big as mine. Rafael’s eyes were having trouble not darting over to Heather.

Rafael and Heather then said hi to each other, and shook hands. They were both blushing. Rafael looked around, saw an empty chair at another table and pulled it over. Daphne and Heather wordlessly made room between each other, and Rafael sat down between them. He started to take off his backpack and Heather helped him with it.

“This is too perfect,” said Daphne.

Rafael and Heather started to chat together, about school, where they were going to college that fall...

Daphne put her hand on my thigh. This felt good.

Yeah, it was all too weird, but what else was new? I half expected Old Mr. MacNamara to come strolling up.

I was very jet-lagged, and on my fourth glass of red wine. I put my hand on her hand on my thigh.

She drew her hand away. Too bad, I’d been enjoying that.

She put the ends of her fingers on her wineglass. White wine, shining in the sunlight.

“He was on some sort of expedition, in the Gobi Desert, along with Buddy Kelly and that Brad person. Remember Brad?”

“Brad Dexter? Sure I remember him.”

“Brad,” she said, and she paused a moment. “Well, anyway, apparently, they all went out in their jeep together, the three musketeers, out into the Gobi, and then they got lost and ran out of gas and, well, their jeep was found out there in the wastelands, but -- no Papa, no Buddy, no Brad. Nothing. Neither hair nor hide.”

She took up her glass of wine and took a sip, swirled the wine in the glass, then put the glass down again.

After a while Heather and I went back to the hotel and took naps, and later we all hooked up again and had dinner at some Moroccan joint in the Quarter. Then we all walked around showing Heather the sights.

Finally we wound up in this very smoky basement jazz club. A band led by an American trumpet player was playing, and Daphne and the kids were all leaning together on the other side of the table; I couldn’t really follow their conversation over the music.

Dick and I had been doing some more catching up through the evening. He’d never heard the whole story about Attie finally dying back in 1980, the letter I got from my mother, and me dragging my ass back to Disdain and taking custody of a daughter I hadn’t known I had.

“I never knew. I’d never gone back home again. I wrote Attie a few times after I left, but all she ever sent me were like two-sentence post cards, and then after a while even those stopped. My mom used to write fairly regularly, but she never mentioned a baby.”

Dick and I were leaning close to each other. I had been gazing through the smoke at the band. I turned my head to look at him. He was looking intently at me.

“I realize now I was a complete asshole,” I said. “Never even going back for a visit to my mom. But I just couldn’t do it.”

“How is your mother?” asked Dick, moving on.

“I mean, what did I know about taking care of a kid?”

“Fuckin’ loves it. She wanted to work, so I got her a job with a craft services company at MGM. Fuckin’ loves her job. Everybody on the lot loves her, too.”

“Yeah. And it kinda makes up for all the years when I wouldn’t visit her. I guess.”

“Y’know, I thought Attie was barren,” I said.

“Because that’s what she told me. She told me she was barren, from radiation exposure.”

“She wanted to have a kid, but she didn’t necessarily want me to know she had a kid. ‘Cause she knew I wanted to travel around, see the world, experience life. All that shit.”

We both shut up for a bit then, and listened to the music.

(Continued here. Please see the right hand side of this page to find what may well be a listing of links to all other published chapters of Larry Winchester’s A Town Called Disdain™, as seen on The Philco Television Playhouse starring William Powell, Myrna Loy, and Skip Homeier.)

I dreamed about this group last night, but can't remember much of what happened.
What I love about this is the strong feeling it's about to start up again. Or at least it could: the same but different, from one generation to the next: Paris, Disdain, and an untraceable other dimension.

I dreamed about this group last night, but can't remember much of what happened.
What I love about this is the strong feeling it's about to start up again. Or at least it could: the same but different, from one generation to the next: Paris, Disdain, and an untraceable other dimension.

That's not fair! I didn't comment twice. My mouse is sick.

Kathleen, maybe your comment got stuck in that other dimension between earth and Frank's casino in space?

Just so long as Arnold Schnabel doesn't come strolling up.

I agree with Kathleen, who felt it was so nice she had to say it twice.