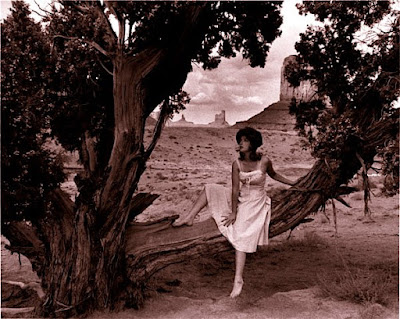 And the long night has finally come to an end here at the Johnstone Ranch, that oasis of civility not very far from a town called Disdain...

(Go here for our previous chapter, or here for the first chapter of this Gold View Award©-winning masterpiece from Larry Winchester. “...the Homer of our wretched age.” -- Harold Bloom.)

It was past seven by the time Dick and Daphne finally made it back to their room.

Dick stood in the bleary light and emptied out his pockets.

His cigarette case and lighter.

The transistor radio with the bullet hole through it (he had forgotten that he still had it).

The two small revolvers -- his own trusty Airweight, and the Colt .38 he had taken off of Brad, which he was pretty sure belonged to Mac; he’d return it tomorrow.

They took off their blood-stiffened clothes, threw them across the floor and got naked into the cool unmade bed. It would have been nice to take a bath or a shower but they were just too fagged out. They sat up against the pillows and they each had one more cigarette.

Dick turned and looked at her. Daphne often gave one pause but she herself so rarely paused.

And it was true, so fucking true, it was all insane.

And Dick thought, well, tomorrow’s another day, as Scarlett O’Hara once said. Even if it is already tomorrow. But just to sleep now. A good long sleep. And then what. What new chaos awaited them?

“Dick, you don’t think those space people will bother us any more, do you?”

“I hope not. After last night I should think they’d prefer never to see us again.”

“Good. That Frank person was a dodgy character. Do you think Papa will stay on earth now?”

“He probably has to.”

“I dare say. Oh, by the way, when you were making those delicious pancakes your father told me he’s giving us some money. A belated wedding present.”

“From that famous briefcase of his?”

“Well, he said it’s indistinguishable from the real thing, but then he also said we should be careful how we spend it. You know, ration it out, or --

“Do you mind that I’m half space-person?”

They sat there against the pillows, their cigarette smoke trailing upward in the soft light, and Dick discreetly admired Daphne’s breasts for the ten thousandth time.

“I know it’s not your fault but if what Frank said was true she’s having your baby.”

“Yeah. I -- I really haven’t quite had time to think about that.”

“What should we do?”

Dick was thinking about this when their door opened and Hope peeked in.

“Speak of the devil,” said Daphne, and she chastely pulled the sheet up over her breasts.

Daphne told her she was already in, then tapped the bed next to her and told Hope to come over.

Daphne scrunched over closer to Dick, and Hope came over and sat crosslegged on the bed, her nightdress tucked under her knees. She smelled like maple syrup and butter. Daphne gave her a cigarette and then filled her in on the whole business of her and Dick having sex in a flying saucer and how she was now presumably pregnant with Dick’s child.

“Well,” said Hope, finally, “I’m too young to bring up a kid. I want to live life, and travel. I think I’ll just give it up for adoption. I’ll tell Papa it was some guy from the air force base. He’ll have such a fit.”

“I’ve got an idea,” said Daphne, after only a moment. “Come with us for a trip.”

“Europe would be nice.”

“Come with us on a trip to Europe and you can have the child there and your father will never know. And then Dick and I will adopt it.”

“That would be great. And then I could visit it sometimes.”

“Sure. Do you think your father will let you go?”

“Well, it’s settled then. Is this okay with you, Dick?”

“Uh, yeah, sure,” said Dick, as if the matter hadn’t already been settled.

(Continued here. Please look to the right hand side of this page for what we hope might be an up-to-date listing of all other published chapters of Larry Winchester’s A Town Called Disdain™, soon to be a major motion picture produced and directed by Larry Winchester and starring Dane Clark and Martha Vickers, coming to a drive-in near you on a double bill with Larry’s Count Dracula’s Niece, starring Barbara Steele and Vincent Price.)
Posted by Dan Leo at 1:58:00 AM

Isn't Daphne perfect? She's my ideal. And, as she pointed out, extraterrestrials can be as horrible as humans, maybe worse, if you consider Frank.
So entirely by her own power, she's a true feminine icon.

It feels so good to get out of blood-stiffened clothes.

Manny: ain't it the truth!