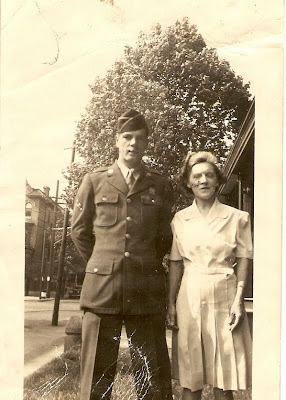 My father and his mother


I've got this extremely fragile and yellowed page from the Philadelphia Bulletin, Wednesday, Jan. 31, 1945. I keep it folded up in the back of a photo album. The page has a round-up of the latest military casualties: killed, wounded, missing, taken prisoner. My father is listed in there:


Sergeant Edward J. Leo, 22, son of Mrs. Rose Leo, 3651 N. 15th St., was wounded December 13 in Germany. An infantryman, he attended Roman Catholic High School and Simon Gratz High School. He was a truck driver, and boxed as an amateur as well as a professional.


About ten years ago my mother gave me a little greeting-card box without a lid, in a Ziploc bag. In the box are about thirty of my dad's letters home from the army in World War II. The earlier ones are written on small cheap stationery; most of the later ones are V-mail, single-sheet photocopies, five inches by four-and-a-half. (From Wikipedia: "V-mail correspondence worked by photographing large amounts of censored mail reduced to thumb-nail size onto reels of microfilm, which weighed much less than the original would have. The film reels were shipped to the US, sent to prescribed destinations for developing at a receiving station near the recipient, and printed out on lightweight photo paper. These facsimiles of the letter-sheets were reproduced about one-quarter the original size and the miniature mail was delivered to the addressee.") The letters are all signed "Bud", which was his family nickname.

Here's a bit from one dated 11/10/44, to my dad's Aunt Kate. He's stationed in England, waiting to get sent across the Channel:

I was glad to hear Franklin got in again, so were the rest of the Joes. You can see by the papers that things are going good with the war. The Nazis ought to be cracking up pretty soon...

This is me again and I'm running out of things to say. The place is pretty much of routine.
I was on pass the other night with O'Melia and Will Hazlett. Will is from Philly, he lives out around 26th & Allegheny Sts.

We were in an English Pub (taproom) spending a nice quiet evening. Their beer is nothing like ours, its kind of warm and tastes flat. They've got a dart board in every pub, just like in Philly. Their boards are the same size but the no.2 ring is about two inches outside of the cork and their game is a little bit different. They don't have any dart boards in Boston so O'Melia didn't know how to play. Me & Will teamed up and played some English men and beat them every time. They've got everything but a juke box in the pubs...

I visited Le Havre what a beating that place took. I traveled all through France and saw some interesting things. I probly passed through a lot of towns that are familiar to Dad. I'm now in Belgium and have it pretty nice. Tonight I'm living in a private home its a break as its teaming rain and cold outside...


I was in the field in France but I still had a turkey dinner.
Well I have to get up early tomorrow. We're having Mass. Don't worry about me as I went to confession and communion on Thanksgiving...

Here is the entirety of a later letter, a V-mail. I can't quite make out the date :

How are you? I am O.K. I went on a tour of the neighborhood with a guy last night, we went to the main part of town and its pretty nice. I even bought an ice cream sunday, the ice cream was good but nothing like ours. I bought four bars of candy for 100 franks ($2.28) they were about as big as a nestle “Babe Ruth". Cakes candy and cigarettes are about the only expensive things though. Apples are beautiful and a good deal of apple pies float around and you know how I like apple pies. There is nothing else new to say. I can use some air mail envelopes and stamps also soap. Well thats about all I have to say, I'm going to bed early to night and rest up. Write soon and tell every one I was asking for them.

And that's about all you had room for with a V-mail letter.

This V-mail to his Aunt Kate is dated 12/1/44. He's quartered with a Belgian family:


...Another day is over and I'm in my house again. I'm getting to be one of the family. The family consists of husband and wife two grownup boys and the wife's brother. When that mob congregates with me and my two buddies (we've got a room on the 2nd floor with a double and a single bed) in the kitchen its a riot. Its an old fashion 3 story house and we sit in the kitchen and drink beer and talk. They speak flemish up here but we understand each other. The lady does our laundry for us also. They're all Catholics over here too and the church is about a mile from where I stay. I go to mass every morning I'm not too busy...


I'm spending a real quiet night at home.I'm sitting here in the kitchen and the two boys Jose and Victor are playing their trombone and trumpet for me. They're pretty good and know some American songs...


There is a big gap in the letters here. My father was wounded by a mortar shell, and his left leg was amputated. Besides getting the Purple Heart that every wounded soldier got, he was also awarded a Bronze Star, but I don't know what for.


I just received a letter from you dated the 7th. I was glad to hear from you. Yesterday I was snowed under with the mail.

I haven't received any of the packages or old mail from the Company. Where they're at they're probly not receiving mail. If I don't have any reply by the time I'm ready to leave here I've written O'Melia and will give him the authority to get all my packages. If he's still alive they'll do him more good than me back in the States. We had that agreement anyhow, whoever got hit first got the others packages.

There's not much going on here, me and the guy next to me were out in the wheel chairs all afternoon again today. We took two of the walking wounded with us today to do the pushing, yesterday we went by ourselves but it was too rough going up hill.

There is a guy bothering me, I write all his letters for him. He's got a banged up arm, tonight he got his first letters in a long time, so I guess I'll be kept pretty busy. Say hello to everyone for me and keep writing.


They were talking about my outfit in a news broadcast today. They're really going to town now. I wish I was with them...


I'm still here in the other hosp. and times passing pleasantly.

Bill O'Melia came to see me Thursday and stayed till Friday. He was surprised to see me in as good shape as ever. We had a good time talking over old times. His feet are pretty good now. I hope they don't send him up to the front again when warm weather comes. At the present he's stationed at a hospital about a hundred miles from me.

I ought to be leaving here soon, I don't know when, I don't think they know theirself. I don't mind waiting though. I kind of hate to go leaving all my brothers here.

Well I don't have much more to say, tell Dad & Jack, hello!

My father never bragged about his army service, he never complained about losing his leg. A few years after the war he married my mom, and they raised a family. He worked as a tool grinder, and died in a car accident in 1977.

Yes, thanks, Dan. I've read through your father's letters a few times before. They sound slightly different and reveal a bit more every time.

My father probably would've said, "What are you printing this crap for?"

sorry, my id didn't come through.
Thanks, Dan.
Dianne

Oh! I'm glad I scrolled down! I'm glad you re-ran this Dan. You should put it up every year.

Thank you to your father as well.

You're welcome, too, Jen!