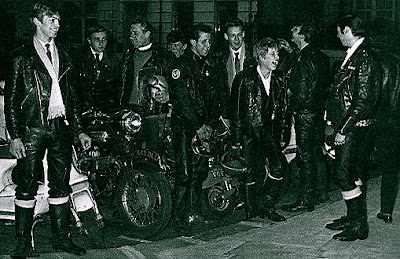 Larry Winchester, that master of montage, now cuts back to the sculptress/café proprietor Enid and the plucky young Hope Johnstone in a '54 Dodge flatbed truck with their prisoner Moloch, surrounded by his uncouth biker gang the Motorpsychos, on a night in September, 1969, on a desert road some several miles from a town called Disdain...

(Click here to review our previous chapter. This episode rated NC-17, for excessive violence to the English language.)

All four of the truck’s tires had been shot out by the Motorpsychos who now gleefully circled around it, yelping and screeching and ululating, firing their weapons into the air, popping wheelies, and generally behaving just as one would expect.

It was still a long way from town, stark starlit desert all around. Off to the right hulked Dead Horse Mesa, a once popular spot to sit and watch the atomic bomb tests. The crescent-shaped depression of the atomic sinkhole below it spread out to about a hundred yards from the base of the mesa.

“Turn off the ignition, Hope,” said Enid. She still held the .45 firmly against Moloch’s left temple.

Moloch smiled, another pallid greenish glob of drool sliding from his mouth into his chin whiskers. Unlike the vast majority of Englishmen, he had once had a fine full set of pearly strong teeth, but, alas, several years of a complete eschewal of oral hygiene allied with round-the-clock ingestion of crystal methamphetamine, marijuana and hashish -- not to mention dozens of blows to the mouth from fists, baseball bats, night-sticks and monkey-wrenches -- had all combined to make his smile ungodly revolting. Moloch was well aware of this and indeed he quite often used his ghastly rictus as a psychological and emotional weapon, but this smile now was a genuine response to the real joy he felt at the awful noise and spectacle his men were making, a kind of joy he had whilom known only in great symphony halls or alone in his study with his gramophone, tears rolling down his cheeks as he listened to, perhaps, Kirsten Flagstad’s rendition of Brünnhilde's immolation scene.

Indeed his present situation filled him with an intense love of life, so much more intense than anything he had allegedly felt in his previous life of dedication to philosophy and music and literature, to family life and healthful walks across beautiful moors armed only with a thermos of sweet milky Earl Grey tea, a few slices of white toast, and a limp leather volume of Mallarmé.

What a fool he had been.

This, this, all this was so much richer than any so-called work of art!

He turned, still smiling, to face Enid, her gun’s snout now pressed between his eyes. He began to sing, softly, raspily, but in pitch and not without talent (had he not been in the buggery choir at Eton, the poncey Rupert Brooke Memorial Glee Club at Oxford?). The melody was slightly adapted from Radamés’s invocation to the god at the end of Act Two of Verdi’s Aïda:

Enid couldn’t help it, and just as Moloch was beginning another verse she quickly swung the .45 back across her left shoulder and then slammed the butt hard into his nose with a satisfying crunch.

He slumped down, out cold, mirrored shades sliding off his face, blood streaming from the jagged gash on what had been his nose, a bubbly purring sound coming out of his slackened mouth.

Enid had the .45 aimed at Moloch’s head. She was watching the blood pouring out of his nose. She took Moloch’s Webley revolver out of her waistband and held it out to Hope.

“Sure do,” said Hope, briefly lapsing into a southwestern accent. She took the gun. “Should we start shooting them?”

She reached into her jacket pocket with her left hand, took out her cigarette case and popped it open. Hope took out a cigarette, lit it with her own lighter, and then put the cigarette between Enid’s lips. The Motorpsychos still circled the truck, screaming and shouting and firing their guns into the night. In their excitement they didn’t seem to have noticed that Enid had walloped and knocked out their leader. Hope took out her own Mexican silver cigarette case and got herself a pastel blue Vanity Fair.

(Continued here. Kindly turn to the right hand side of this page to find a purportedly up-to-date listing of links to all other extant episodes of Larry Winchester’s A Town Called Disdain™. Be sure to take advantage of our post-Christmas Town Called Disdain™ Action Figures Sale Event, all items marked down another 55%, exclusively at Ross Dress For Less. All action figures made of the highest quality Chinese plastic and tested for lead and several other toxins.)

I am smitten with Enid. But I'm afraid she might smite me for real.

Such great details in this episode that I found a grain of sympathy for loathsome old Moloch. His song is a real ear worm.
Bravo Larry, Arnold, and Dan. Auguiri 2009!

Baldy -- dig it, you don't want to get on the wrong side of Enid.

Kathleen: I know what you mean about Moloch's song. I had to go back and listen to Nancy Sinatra's "Sugar Town" a few times just to get it out of my head.