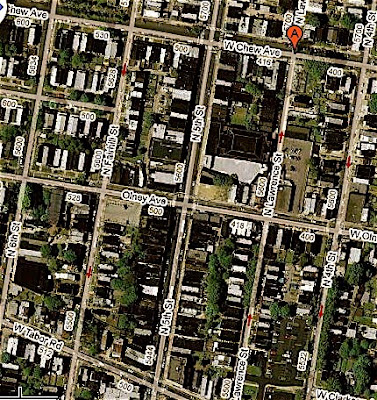 Thanks to recently released Russian archives, we present the above spy photo of another portion of the little world of Philadelphia’s “Rhyming Brakeman”, Arnold Schnabel, circa 1962.

Walking east on Chew we come to 5th Street, also known as the “Old Main Drag”, home to numerous shops frequented by Arnold and his mother.

Turning left on 5th, Arnold would often go up to the sprawling second-floor Fahey’s Book Shop, where he would buy used copies of paperback novels by the likes of David Goodis, Richard Stark, Peter Rabe, and Jim Thompson. Having read them, he would bring them back to Mr. Fahey and trade them in for more of the same.

It was in Fahey’s shop that Arnold gave the one-and-only poetry reading of his career, on a cold and rainy Tuesday night in November of 1962. So many Olneyites (mostly women) came out to hear their bard that many had to stand in the back or sit on the floor or on the long windowsills.

Despite the success of the evening, the modest Arnold declined all future invitations to read his work. 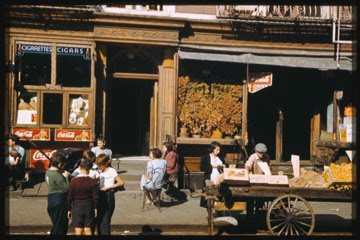 5th Street below Chew, 1962 (Fahey's Bookshop entrance to the right of the cigar store)

(Go here for Part 117 of Arnold Schnabel's memoir Railroad Train to Heaven. Kindly turn to the right hand side of this page for listings of links to all other published chapters of this magnum opus as well as to many of Arnold's easy-to-understand poems. All material published with the kind permission of the Arnold Schnabel Society of Philadelphia PA.)

"a cold and rainy Tuesday night in November of 1962"

Would that I could have been there!