A poem for the season 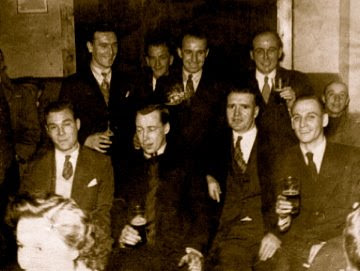 Somehow it’s been almost ten months since we’ve run a classic Arnold Schnabel poem. We are happy now to present a masterful sonnet from that dour period immediately preceding Arnold’s complete mental breakdown, originally published in the Olney Times for January 4, 1963; two weeks later he would be in a padded cell at the Philadelphia State Mental Hospital at Byberry.

(The “Chew Avenue” of the title refers to the location -- on the corner of Chew and Lawrence -- of the local Veterans of Foreign Wars post, now sadly defunct.)

It’s New Year’s Eve, it seems we’ve made it,
If only barely, through another year;
The terror, if not gone, has abated
Into a dull and grey persistent fear.
My mother’s sound asleep by eleven,
So I go to the VFW,
Shove to the bar of this drunkard’s heaven,
And say, “Pat, if you please, I’ll trouble you
For a Schmidt’s, backed with an Old Forester,
And keep them coming till I say not to,
Or until you throw me out; whatever;
Do what your conscience says that you’ve got to.”
I take that first sacred drink of cold beer:
“Happy new (let’s hope it’s not our last) year.”


(Republished for the first time since 1963 with the permission of the Arnold Schnabel Society of Philadelphia, PA. Kindly look to the right hand side of this page for a listing of links to many other fine poems by Arnold Schnabel, many of them suitable for recitations and toasts at family, business or social gatherings, weddings, and funerals during this holiday season. Be sure also to visit our ongoing serialization of Arnold's classic memoir  Railroad Train to Heaven.*)

*"I read a page or two every night before retiring." -- Bertrand Russell

Trevor, you nut! Remember: no smoking ganja in the Vatican!