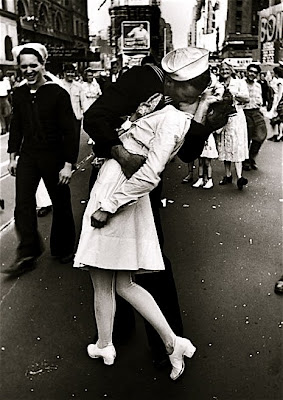 By popular demand Larry Winchester* now checks in again with two of his most beloved characters, the Cockney rock star Derek Squitters and the Native American brujo Paco…

(Go here for our previous episode; and here is where the whole sad story began.)

*“This man loves to fuck with your head.” -- Harold Bloom

Now it was a Luden’s cough drops commercial.

“This shit’s freakin’ me out, Chief,” said Derek.

Paco bent forward, reached out, and switched the channel.

The World War II movie came on again with a montage of newspaper headlines in Italian, French, Chinese and English, all of them declaring in bold type “NAZIS SURRENDER! VICTORY IN EUROPE!”, followed by stock-footage shots of crowds of people celebrating in Times Square, Trafalgar Square, at the Arc de Triomphe.

Cut to the young Mac MacNamara -- unshaven, in dusty combat fatigues and overseas cap, carrying a battered leather briefcase, leaping out of a jeep on a London street on a bright spring day. The young Buddy Kelly, also unshaven -- in dirtier fatigues and cap, buck sergeant stripes on his sleeves, a dead cigar stump in his mouth -- sat at the wheel of the jeep.

“Like me to wait for ya, Major?” said Buddy.

“Ah, now, Major, you know what happens when I get drunk. Remember that café in Brussels? Them three British officers? And them Belgian cops?”

He laid his briefcase on the hood of the jeep, took out his wallet, pulled out a sheath of British currency and dropped it on the front passenger seat.

“Now, Buddy, I want you to drive directly to number 231-B Jermyn Street and go to the second floor. Tell the lady that Mac Macnamara sent you and you’re to have two of the finest Polish whores she’s got in that place.”

Buddy picked up the bills and counted them, took the cigar stump out of his mouth and whistled.

Mac picked up his briefcase.

“You heard me, soldier. And that’s an order.”

Buddy stashed the bills in his jacket pocket and snapped off a salute.

Mac returned his salute, Buddy put the jeep in gear and roared off.

Mac strode across the sidewalk and up the steps of a large building. Graven into the granite above the arched entrance are the words “St Mary’s Lying-In Hospital”.

Sister St. John, a no-nonsense English nun in a white habit, stood in front of a door.

Mac took out his wallet, flipped it open, and showed it to the sister.

Adjusting her wire-rim glasses, she read the identification card.

“But this is highly irregular, sir. Visiting hours are --”

“Sister,” said Mac, “you’re going to force me to turn on the charm. And I’m not so sure you want to see that.”

“Major, I assure you your charm will avail you naught with me.”

“I was hoping I wouldn’t have to resort to bribery.”

“For the poor box, sister.”

He slipped the notes into the shocked nun’s sash.

“Sister, did anyone ever tell you how very charming you are when you’re shocked?”

Touching her her arm gently with his left hand he sidled past her to the door, opened it, and went inside.

Mac took off his cap, folded it, slipped it into the epaulet of his field jacket.

Sister St. John stood in the doorway behind him, one hand clasped in the other.

“Well all right then,” she said, quietly. “But only fifteen minutes. Poor dear needs her rest, had a very difficult delivery, poor thing. And please, Major, no smoking.”

“Sure thing,” said Mac, speaking barely above a whisper.

The sister closed the door, leaving Mac alone in the room with the sleeping April.

“Oy, so he knocked the bird up,” said Derek.

Mac stood there a moment, simply looking at April. Then he drew a seep breath, and sighed.

He went over to the bed, pulled a plain wooden chair closer to it, and sat down. He put his briefcase on the floor, took a pack of Chesterfields out of a side pocket of his jacket, shook one out and put it between his lips. He paused, staring at April’s face. He put the cigarette packet on the bed table, took out a scuffed Ronson and lit his cigarette.

April’s eyes opened. In the soft light from the window her face looked almost as pale as the pillow on which her head rested.

“Got a spare cigarette, soldier?”

Mac picked up the cigarettes again, gave the packet a shake, held it toward April’s lips. She ducked her head forward and brought it back with a cigarette between her lips.

She rose up weakly on her elbows and he gave her a light.

The smoke from their two cigarettes merged and swirled in the spring breeze wafting from the window.

“Oh, and look, Mac,” she said. There was a teacup and saucer on the bed table, and April laid her cigarette on the saucer. “Your daughter and heiress.”

She drew back the covers to reveal a tiny sleeping infant at her side.

The baby awoke and made a gurgling noise.

He reached out his big index finger to the baby, she grabbed it and gurgled again.

“I’m thinking of calling her Daphne,” said April. “Do you like that?”

“Daphne was a nymph who, when pursued by Apollo, was saved by being changed into a laurel tree.”

“Did she have to stay a laurel tree?”

“I certainly hope not,” said April.

(Continued here. Kindly turn to the right hand side of this page for an up-to-date listing of links to all other available episodes of Larry Winchester’s A Town Called Disdain™, soon to be a major motion picture starring Robert Mitchum and Jane Greer.)

Dan, How I'd love to watch that TV show. In fact, this comes very close to how I've always wished life could be:Turn the channel and live or relive a different stage.

Wow! I've never seen Aretha that young. She's amazing. And no other vocalist should have to follow her act, that's just unfair.