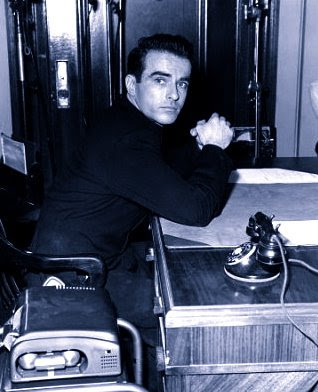 Return with us now to a faraway planet called the past, and to a warm August evening in that forgotten year of 1963, as we visit the still-quaint and even slightly shabby seaside resort of Cape May, New Jersey…

In our previous episode of this Dutch Masters Award-nominated memoir our intrepid hero Arnold Schnabel, having gone into Our Lady Star of the Sea Church to escape the seemingly ineluctable and hot-blooded novelist Gertrude Evans, encountered a downcast Father Reilly, who has his own reasons for avoiding Miss Evans. Father Reilly takes Arnold into the church office for mutual sanctuary, where, in the midst of that good priest’s dark night of the soul, Arnold’s personal lord and alleged savior suddenly appears --

Of course I took his gesture to mean that I wasn’t to reveal his presence to Father Reilly, but I wondered: if this tortured cleric were to turn around, would he see my friend?

Just as Father Reilly wished to see him (or Him as the case may be), if only just once, as for myself I would have liked even once for someone else besides me to see him.

All I had to do was ask Father Reilly to turn and look; but then I would be disobeying Jesus, probably a mortal sin by definition. Unless he was merely a figment of my imagination, in which case I was merely insane.

Delving into the moral quandary a bit further it occurred to me that if all went well I was probably going to commit a mortal sin that night with Elektra; and so, if I were going to be in a state of mortal sin soon anyway, what was the big deal about disobeying Jesus’s injunction to keep his presence secret now? According to Church doctrine one mortal sin was just as damnable as a hundred. However, Jesus had told me that extra-marital copulation was not a mortal sin. And so if my friend were indeed Jesus then I would not find myself in a state of mortal sin later that night upon committing the act of darkness. And indeed, hadn’t Father Reilly himself just given me the okay on that front?

“What are you thinking about?” asked Father Reilly.

I glanced at Jesus. He was smiling again, or still, his head cocked.

“I was thinking that seeing Jesus might not solve all your problems after all, Father.”

Putting his cigarette in his mouth and smiling more broadly, Jesus made an applauding gesture with his two hands.

“Yes, perhaps you’re right, Arnold,” said Father Reilly. He looked toward the door. “I wonder if she’s out there. We can’t stay in here all night. When are you supposed to meet your lady friend?”

This has been a recurring theme in my life, people asking me questions about myself. As much as I’ve tried always to blend into the woodwork people still seem to recognize me as a curiosity.

“And you've never married?” he asked me.

Which was, and is, the truth.

In fact I had met more than a few girls who might have been right, or as right as could reasonably be expected, introduced at parish functions by my fellow ushers or Knights of Columbus. Not to mention certain women who had deigned to talk to me, or try to talk to me, as I sat in some bar quietly getting drunk.

“Afraid to settle down?” he asked.

That couldn’t be it. After all, I had always lived with my mother, and you couldn’t get much more settled down than that this side of the grave.

He sighed. I couldn’t blame him.

I cast about for something to say which might contain a grain or two of truth.

“Was it that you found it hard talking to girls?”

“Yes,” I said. “But then I’ve always had trouble talking to men also.”

“I can well believe it,” said Father Reilly. “But now here you have a lady friend. And you seem to have other friends as well.”

Jesus seemed to be paying close attention to the conversation. He had no ashtray by where he sat, and I saw him tap the ash of his cigarette into the cuff of his wrinkled khaki trousers.

“Do you know what I think?” asked Father Reilly.

This is another question that’s always bothered me. I barely know what I think myself, how could I possibly know what anyone else thinks?

“I think you’ve spent your whole life being slightly insane, and that now you’re slightly sane.”

“What do you think?” he asked.

“Well, I definitely have my doubts about my sanity,” I said. “But if I’m only slightly sane then I don’t think my opinion is worth much.”

In truth I was bored talking about myself, but at least this colloquy seemed to be taking Father Reilly’s mind off his own troubles. I almost hated to leave him, but the fact was I had a date with Elektra.

He had smoked his cigarette all the way down to his fingertips, and now he stubbed it out in the ashtray.

“Well, I guess I should be getting along now,” I said, fidgeting.

I got up. The backs of my thighs were sticky from sitting on the leather chair in my bermuda shorts.

Jesus still sat there, in the deepening shadow. He was putting his cigarette out also, on the sole of his sandal, collecting the ash in the palm of his hand. He didn’t look up. I wondered if he would talk to Father Reilly after I’d gone. Well, it wasn’t my business. At least it wasn’t my business as far as I knew.

“Good evening,” he said. “Perhaps I’ll see you at mass in the morning. You usually come to the nine, don’t you?”

“Yes. You might have a late night I suppose.”

I thought it best not to reply directly to this statement. I went to the door, limped to the door.

“What happened to your leg?” Father Reilly asked.

Not mentioning that I had fallen trying to climb down a drainpipe from a third-storey window while trying to escape from the woman who perhaps even then waited to pounce on me outside.

I glanced one last time at Jesus, who was now dropping his extinguished cigarette butt into his trouser cuff.

I put my hand on the doorknob.

“I’ll be saying the noon mass also tomorrow,” said Father Reilly. “If you want to come then.”


(Go here for our next chapter. And kindly turn to the right hand side of this page for an up-to-date listing of links to all extant episodes of Arnold Schnabel’s Railroad Train to Heaven™: “...simultaneously the greatest American memoir since Walden, our greatest novel since Moby-Dick, our greatest book of poetry since Leaves of Grass, and much less boring than all of the above.” -- Harold Bloom.)

By overwhelming popular demand we welcome the lovely France Gall back to our stage with this Serge Gainsbourg composition:

Delightful episode, as always. Arnold is a true visionary.

Why in those days didn't anyone ask married people why they're married?

Are the repellent DeVores the only wedded couple in Arnold's world?

Perhaps I'm reading this too personally since I'm married, but even those who dislike me do not find me boring. I'm much more likely to be dismissed for not being proper and socially sedate.

Nice to see that Arnold's Jesus is very neat.

As much as I’ve tried always to blend into the woodwork people still seem to recognize me as a curiosity.

Boy can I relate to that... and then I realize, I'm trying to blend into the wrong woodwork. I need to be in a different house.

I'm also thinking how different church and parochial school would have been had Arnold's Jesus been hanging around in the corners, reacting to the hot air being strewn about.

I can't decide who's cooler, Arnold or Jesus.

Linda my child you need look no farther than your own south lawn.

Sure, I knew O'Bama had to have a bit of the Irish in him, with his golden tongue and all...

(Me being of the Limerick Leos doncha know.)