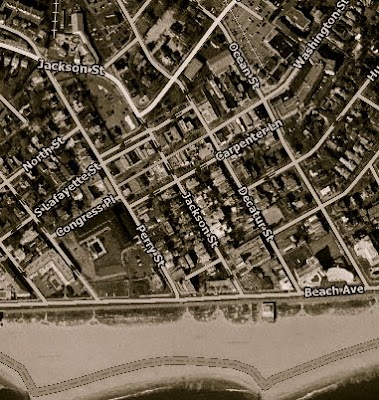 As a service to our readers we present the above aerial photo of Arnold Schnabel’s Cape May, NJ, circa 1963, taken by a Russian spy satellite.

Yes, there’s Arnold’s aunts’ house, just a couple of doors down North Street from Perry, on the north side. That’s Mrs. Biddle’s residence down on the next corner.

On the north side of Washington, a few doors up from Perry, is the book shop where Arnold bought his paperback copy of T.S. Eliot's The Waste Land. Farther up Washington toward Jackson is the cigar shop with the cranky proprietor, where Arnold's cousin Kevin buys his used comic books, and where Arnold often bought his Pall Malls, until he quit smoking suddenly one day.

Going farther up Washington, moving quickly past the Ugly Mug and crossing Decatur, we stroll up the block to Our Lady Star of the Sea Church (R.C.) on the northwest corner by Ocean Street. Across the Acme parking lot up there is the popular Pete’s Tavern.

Turning back down Washington Street, going by the Cape Coffee Shoppe and turning down Jackson Street and past that charming caravanserai the Pilot House, we come, just off the southwest corner of Carpenter's Lane, to the charming Victorian which houses Elektra’s jewelry shop and the second-floor apartment she shares with her friends.

That’s the beach and the Atlantic Ocean down at the bottom.

(Go here for Part 111 of Arnold's memoirs or here for our previous installment. And please check the right hand side of this page for up-to-date listings of links to all other available chapters of Arnold Schnabel's Ballantine Ale Award-winning memoir Railroad Train to Heaven, as featured on The Kraft Television Theatre, starring Lee Marvin and Pier Angeli, and to many of his most beloved poems, as featured on the long-playing album Burl Ives Sings Arnold Schnabel!, musical settings by Leonard Bernstein, featuring the Pete Condoli Combo, with back-up vocal stylings by The Blossoms, produced by Shel Talmy, available both in stereo and mono, to be presented this holiday season for a limited run at the Pantages Theatre on Broadway, with the June Taylor Dancers and the Mabel Beaton Marionettes and very special guest star Mr. Jackie Gleason, directed by Charles Laughton, a Max Reinhardt presentation in association with Jack Webb, made possible by the Clorox Bleach Foundation and the Arnold Schnabel Society of Philadelphia, Pennsylvania.)
Posted by Dan Leo at 1:36:00 AM

Why... is that sauerbraten I smell??

caravanserai
Stupid me. I had to look it up, but as always it's the mot parfait.