“A Town Called Disdain”, Episode 96: up the ramp 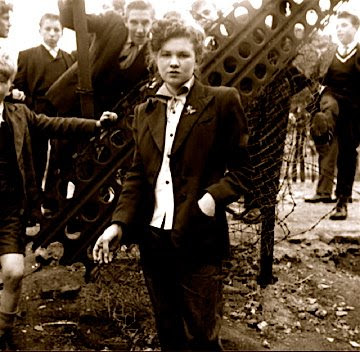 Larry Winchester, always on the look-out for the mental welfare of his rabid readership, now returns to Dick, Daphne and Harvey on that enormous space station/casino somewhere between the earth and the moon…

(Go here for our last chilling episode, or, if you are a lucky newcomer -- perhaps brought here by Gov. Sarah Palin’s declaration that this is “like my most favorite book, next to of course the Bible” -- click here for our very first chapter.)

It was a big domed hangar, bright electric lights way up in the ceiling.

In the center of the hangar was a large green flying saucer, maybe a hundred-and-fifty feet in diameter. The ramp of the saucer was down.

At the foot of the ramp stood Dick, Daphne, Harvey, Mr. Macnamara, and Buddy Kelly, who was a short stocky guy of about fifty, in greasy and stained mechanic’s coveralls. Dick and Daphne had stowed their firearms, but Harvey still held his gun on Frank and Brad, who stood sullenly about six feet away from the others.

Standing uncomfortably a dozen feet away to the other side stood five technicians, or at least what appeared to be technicians, in white jackets and white trousers, all of them with ball-point pens in their breast jacket pockets. They all carried clipboards.

Buddy shoved a monkey wrench into one of his many pockets and wiped his oily hands on a rag.

“She’s all gassed up and ready to go, Major,” he said. “I re-oiled the warp cams like you told me, plus re-registered the astral regenerator and tightened up all the time-slip mags.”

Mr. MacNamara offered Buddy a cigarette from a pack of Chesterfields. Buddy took one, and Mac gave him a light with his sliver-plated Ronson.

“Good,” he said. “How’s the balance on the Reality Woofer?”

“You could stand a cunt-hair up on it, Major. Oh, sorry Miss Daphne.”

“Please excuse this nitwit, sweetheart,” said Mac. “He doesn’t get out much.”

“First time I been out of the shop in, oh, Christ, like five fuckin’ years,” said Buddy. “Oh, ‘scuse me, Miss Daphne.”

Daphne helped herself to one of her father’s cigarettes.

“I think you’re charming, Buddy,” she said, and, Johnny-on-the-spot, Buddy beat Mac to the punch in giving Daphne a light, whipping out what looked like a tiny acetylene torch from a pocket, flicking it on, adjusting the light with his thumb on a grooved disc, and touching the head of Daphne’s cigarette lightly with a thin blue jet of flame.

A true gentleman of the old school, Mac now offered the Chesterfields to Harvey -- who declined, taking out his own Tareytons -- and to Dick, who took a Chesterfield.

Frank had a Flintsones Band-Aid over the cut on his cheekbone, and someone had given him a too-large and too-long pair of the white technician’s trousers to replace his wet tuxedo pants. He had been watching the smoking ritual with increasing impatience.

“Fuckin’ people annoy the hell outa me, man,” he muttered.

“You’re way out of line, here, Mac,” said Frank, talking loud now. ”Way out of line and the Home Office ain’t gonna like it.”

Mac, having lighted up Harvey and Dick, now accepted a light of a cigarette himself from Buddy’s miniature acetylene torch.

“Very long time since I’ve been in an earthling body --” said Mac, in his gruff but euphonious baritone, to no one in particular, “I gotta tell ya one thing I really missed is a good smoke.”

“I guess you guys ain’t got cigarettes where ya come from?” ventured Harvey.

“You make me think it, Frank,” said Mac. “Because you’re coming with us. You and Brad.”

Frank seemed ready to say something, but Harvey simply raised his now un-cocked pistol and pointed it towards Frank’s torso.

A moment passed. Then --

“Always with the guns,” said Frank. “Guns. Violence. All you kinda people understand -- guns, violence, fuckin’ threats. Try to have an intelligent conversation? Try to have a -- try to be a fuckin’ -- try to be fuckin’, I dunno -- rational? Try to --”

“Get up that ramp, Francis,” said Mac.

And he walked over to the ramp.

“Let’s just say,” said Mac, “I enjoy the playful verbal jousting between you and Frank, Brad.”

“Oh, okay. Just askin’,” said Brad, and he followed Frank to the ramp.

(Go here for our next fabulous chapter. And kindly check out the right hand side of this page for an up-to-date listing of links to lots of other episodes of Larry Winchester’s A Town Called Disdain™, a Stay the Course Production.)

Hilarious scene. Just hope they get to Moloch's gang in time.

And Otis has sent me exactly where I long to be.

Kathleen, we aim to please.