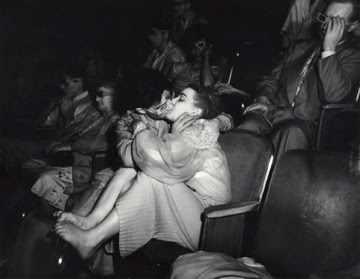 In our previous chapter of this critically-lauded (“If the Bible weren’t my Bible, this book would be my Bible” -- Sarah Palin) memoir, our hero -- that saint and only occasional sinner Arnold Schnabel -- went into Pete’s Tavern (Cape May’s unique “Negro bar”) with his friends Daphne, Tommy, and Sister Mary Elizabeth, where Arnold was greeted “like a long-lost brother” by Charlie Coleman, handyman and gentleman farmer.

Sister Mary Elizabeth sat to my right, Daphne to my left, and Tommy next to her.

Charlie, who stood on the other side of the sister, raised his own glass of Schenley’s and shouted something in a toast, don’t ask me what.

We all drank our shots and Sister Mary Elizabeth started coughing.

“Are you okay,” I said, which is about all one can say when this sort of thing happens, accompanied by a light tapping on the afflicted person’s back.

I felt somewhat abashed and guilty, if only because the back I had patted was a female back, the upper part of which was naked and as smooth and white as marble.

“Sip some beer,” I suggested.

“Does it taste better than the whiskey?”

“Okay,” she said, and she sipped her beer.

She sighed, as the loud music tumbled around us through the happy chatter and laughter of all these drinking and smoking people.

Charlie had moved around behind me, and was now standing between Daphne and Tommy, chatting away with them about God knows what; I sure didn’t. It occurred to me that I hadn’t introduced Charlie to my friends, but apparently they had done the honors themselves.

So here we were in Bar World, that world to which people of all races retreat just as soon as they have the price of a beer or a shot, preferably both, this darkened world where we can pretend for a while to be someone a little less sad and lonely and ignorant and fearful than the one we are condemned to be again when at last we stagger or crawl or are ejected into that awful other world outside.

“What are you thinking about?” she said.

Who has the energy after all? It’s not as if we are morally obliged to open a conversational can of worms in response to each and every innocent question.

She looked around. The other people in the place had all settled down into their own little universes, paying no attention to our little group. I suppose it wasn’t the first time white people had come in here. After all, it was a white people’s planet out there. Who were we to let the Negroes have their own little patch of turf to themselves?

And in fact, looking around discreetly through the dim light and the smoke I saw that we were not the only Caucasian people in the place. Down at the far right of the bar in a booth across from the jukebox sat a white couple, both of them sitting on the near side and thus facing away from me. The man was on the left, and from what little I could see of his face he seemed vaguely familiar, but then this was a small town, even in the height of the tourist season. He wore a white short-sleeved shirt. All I could see of the woman was her honey-colored hair, her round bare shoulders.

“Can we, Arnold?” I heard Sister Mary Elizabeth.

“I don’t have any money, though, remember?”

Fortunately I had some of this in my wallet. I extricated a ten, managed to attract the bartender’s attention, asked him to back up Charlie with another beer and whiskey, and to please give me a buck’s worth of change for the jukebox. The good man did all this, and I was pleasantly surprised to see that the cost of Charlie’s collation was only one dollar. To celebrate, and to further good relations between the races, I tipped the fellow a dollar, for which he solemnly thanked me, even calling me “sir”. (For some reason I usually get “buddy” in white bars, or “pal”, or the dreaded “chief”.)

I shoved the palmful of dimes toward the sister.

“Will you come with me?” she asked.

“Sure,” I said, my teeth rattling as Charlie pounded my back and shouted in gratitude.

I followed the sister down the narrow passage between the bar stools and the booths. Despite myself I could not help appreciating her small trim but rounded figure, and I was thinking I would probably have plenty of material for next Saturday’s confession to Father Reilly, if only in the impure thoughts department.

As we came up to the jukebox I also couldn’t help but notice the couple in that last booth, the woman with her left arm around the man’s back, kissing him. Well, good for them, I thought. Life is short. Life is short as well as being too long. At any rate life is hard, and why not kiss someone if you want to kiss them, provided of course it’s someone who wants to kiss you for some reason?

We got to the jukebox and Sister Mary Elizabeth began feeding it dimes, leaning forward in a way that made me think I’d better come closer to the jukebox and at least pretend to look at the song titles, but really so that I wouldn’t be tempted to look at Sister Mary Elizabeth. But now, even if I wasn’t looking at her, I was standing next to her, in fact she was touching me with her hip, and I could feel her warmth and her scent, which I now recognized as Daphne’s, although I couldn’t ever recall noticing Daphne’s scent.

“What should I play?” she asked. “I don’t know any of these songs.”

“Just punch numbers at random,” I said, the voice of wisdom, “first a letter and then a number.”

“I’d rather go by the song titles.”

“That’s a good method too.”

Someone tapped on my back.

I turned, and it was indeed Miss Evans, with blurred lipstick and in a silvery dress with bare shoulders, her honey-colored hair identical to the hair of the woman who had been sitting in the booth, which of course had been her, and a quick glance past her revealed that the man sitting in the booth looking at me with a face expressing resignation and at least four or five other emotions and states of being was no other than my confessor, Father Reilly.

(Continued here, and for only God knows for how long. Kindly check out the right hand side of this page for an up-to-date listing of links to all other extant episodes of Arnold Schnabel’s Railroad Train to Heaven™; imprimi potest, Msgr. John E. Staccato.)

Tell us about it, Ray:

"Life is short as well as being too long. "

Arnold writes such beautiful sentences. After reading this meditation, I wonder if--hierarchy be darned--Arnold shouldn't consul Father Reilly on Saturday.

Anon: Arnold thanks you!

Kathleen: I think Fr. Reilly's gonna need counseling from somebody, and a lot of it.

Jen: Hang in there, kid; have a Snacktator!

Ha!
Great post, chief.
Hope the Catholic Legion of Decency isn't reading this one, though.

While I have no idea what kind of counseling would best benefit Fr. Reilly, who but Arnold can tell him about yodeling? Except maybe Steve, whom I'm beginning to miss.