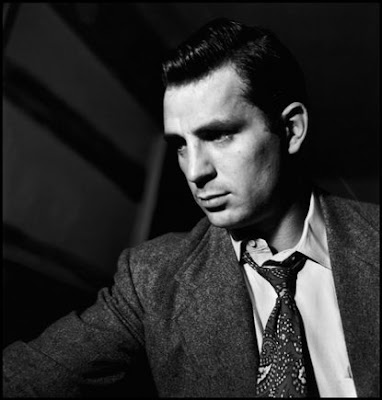 Previously in our CVS Award-winning serialization of these memoirs of the man Harold Bloom called “the poet laureate of the forgotten man”, our hero Arnold Schnabel made the acquaintance of another giant of modern literature (not to mention film and TV), Larry Winchester.

August 5th or 6th, 1963. A happening get-together on the second-floor porch of the Biddle house, Cape May, New Jersey...

Larry and Elektra continued to chat, and I checked out again, another one of my fade-outs into my own merry little world.

Occasionally I’ve gotten into a little trouble or embarrassment because of this proclivity.

One time in 1942 I was sitting around with some other railroad guys at Oscar’s Tavern down on Sansom Street and they all started saying “All right! Let’s go then!” And they clapped me on the back and said, “Let’s go, Arnold!” And I, having no idea what they were talking about said, “Okay!” And followed them out the bar and down the street to the recruiting station where we all joined the army. But the thing was, as railroad men we were exempt from the draft, and all we had to do was keep working for the railroad and we wouldn’t have had to go to war. Which would have been fine with me. But there I was with all the rest of them, volunteering, just because I hadn’t been paying attention.

I lost my virginity that way, too. A few weeks after V-E Day I was sitting with some of my buddies in a café in Frankfurt, drinking peppermint schnapps and beer, dreaming of God knows what, when one of them said, “You up for it, Arnold?” And I said, “Sure.” Next thing I knew I was being frog-marched into a brothel, gibbering with fright as if I were being dragged to the electric chair. And as terrified as I was going in I was even more terrified an hour later when I shuffled out, expecting a lightning bolt to strike me down at any moment and cast my wretched unshriven soul screaming hellward.

This daydreaming was also how I joined the Democratic Party, why I came to be the boxing coach of St. Helena’s Parish CYO, and why I often found myself volunteering for extra shifts on the railroad or for extra masses as an usher. It’s only by sheer luck that I have never been sitting obliviously woolgathering with some guys at a bar while they all agreed that we should tear off our clothes as one and run screaming out into the street naked or pull an armed robbery of the PSFS Bank or jump off the Benjamin Franklin Bridge.

So I knew that Larry and Elektra were chatting, I just had no idea what they were chatting about. Until Elektra tweaked my cheek and said, “Arnold, answer Larry.”

“Um —” here we go again, I thought, desperately trying to tread water until I could figure out what the heck was going on.

“Oh, no, I don’t mind,” I said, thus throwing away the out he had just handed me.

“Aren’t you working on a memoir?” said Elektra.

“Yes,” I said, wondering what this had to do with anything.

“So tell Larry about it.”

“Well,” I said, at long last realizing that he must have been asking me if I was working on anything special in the literary realm, “it’s — it’s just about my life, really.”

“So you’re writing your autobiography?”

“Well, I thought it was going to be like that at first, but mostly it’s more like a sort of diary, I suppose. Just the little things I do all day.”

“Uh, maybe,” I said. I remembered seeing Jack Kerouac on Steve Allen, although I’d never read any of his books because they didn’t have scantily-clad women with guns on the covers.

“Do you have a publisher yet?”

“Oh, no, no one would ever publish this stuff, Larry. I’m only writing it to —”

I stopped in my verbal tracks.

“You’re a true artist, Arnold," said Larry. "I’ll be honest with you, I used to think your poems were — well, what do I know?”

“Well, the point is, I looked at some of your most recent poems on my mother’s Frigidaire, and I thought they were quite good.”

“Arnold, I think you and I might be able to work together.”

“Sure. Why not? I like to work with other guys. Somebody to kick around ideas with. Bang the typewriter keys when my fingers get tired.”

“Oh, I get it. You feel you have to concentrate on your memoir. And your poems.”

“Then what’s the problem? There could be a few bucks in it for ya, kiddo.”

“Sure. I don’t write anything on spec. I get the contract, then I write the goddamn script, and not one second before.”

Scripts, specs, contracts, it all seemed somehow so tedious to me.

“It’s like I gotta shoot a picture in Paris next month, Arnold. I got the cast and a budget, but the script they want me to do stinks.”

"Yeah, a GI on leave in Paris gets mixed up with a dame and a killing."

“Arnold’s tough all right,” said Elektra, and she moved in my lap.

It was then that I realized that I had an erection.

(Turn here for our next thrilling chapter. And kindly turn to the right hand side of this page to find listings of links to all other extant episodes of Arnold Schnabel’s Railroad Train to Heaven™, soon to be a major TV series from Desilu Productions starring Ralph Meeker, Barbara Steele, Ellen Ankers, Marie Windsor, Roddy McDowell, and Brad Dexter.)

How I'd love to attend an Arnold Schnabel reading, poems matched with memoir.
His pace feels so luxurious--the perfect counterpoint to beatnik Jack's. Ask Larry to direct.

I hope Arnold doesn't go Hollywood on us.

Don't give us any ideas, Manny!

Hello. This post is likeable, and your blog is very interesting, congratulations :-). I will add in my blogroll =). If possible gives a last there on my blog, it is about the Impressora e Multifuncional, I hope you enjoy. The address is http://impressora-multifuncional.blogspot.com. A hug.

I love how Arnold's pauses allow others to fill in the blanks of his life.

Jen, right, Arnold sometimes gets distracted, but mostly he's just taking his time trying to think of something true to say, and his interlocutors tend to jump in try to fill in the blanks.