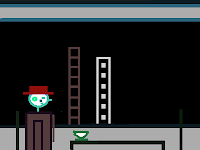 "it's always friends who have stories"

he had spent most of his life daydreaming, including his years growing up in the bronx, the almost five years he spent "in the war"and after it at camp wade hampton in south carolina, and the years he had spent since, hanging around broadway and times square and the race tracks.

he even found himself daydreaming during races he had bet heavily on (heavily for him), and was hanging on the rail himself to watch. he would often have to check the board to see who had won, having been too absorbed in his reveries to notice when the horses crossed the finish line.

as a child he had sometimes described the contents of his daydreams to his grandmother, the only person who listened to him, or was at least polite or bored or immobile enough to pretend to listen to him.

when he had finished, or trailed off with his recital, his grandmother would usually ask the same question.

he had never had much of an answer.