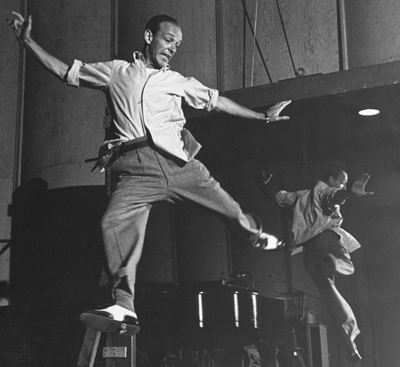 Let’s rejoin our hero Arnold Schnabel here in the black-and-white world of the Little Caesar Room, where his divine but somehow all-too-human friend “Josh”, under the influence of that most recent mug of Rheingold, has fallen asleep face-down on his arms at the bar...

(Kindly go here to read our previous episode; if you’re looking for a new reason not to leap from the top of the Eiffel Tower you may click here to return to the very first chapter of this Gold View Award™-winning 53-volume autobiography.)

“To tell the truth, Jack, the only thing that really keeps me going these days is the prospect of reading another chapter of Arnold Schnabel’s inimitable masterwork.” — Harold Bloom, on The Jack Paar Show.

I took a quiet moment for myself here.

After all, Josh had stopped time, which meant that I myself now had all the time in the world, in this world at least, and, who knew, perhaps in every world and every universe or dimension or mode of existence, fictional or otherwise.

I could even take a nap myself now if I so chose, simply cross my forearms on the bar parallel to my torso and then lean forward, lowering my weary head and burying my face, just as Josh had done, and with any luck I wouldn’t even fall off my barstool. But I wasn’t that sleepy, or quite that drunk, not yet I wasn’t anyway.

I could even, if I wanted to, without fear of scorn or censure, remove all my clothing and shout Communist slogans, and when I grew tired of that I could jump up on the bar and dance the Watusi while whistling “Dixie”, and for a mad moment I considered doing all that but then it occurred to me that if I did I might wake Josh up, which would be embarrassing, for me, anyway, and maybe even for Josh, too.

He was snoring now, but gently and in a muffled way, face-down there on his forearms, his straw Trilby hat still on his head.

I wondered if he was dreaming.

What does the son of God dream of?

Are the worlds he dreams of real worlds?

Or, once he has dreamt of a world, does it then perforce become real?

As usual with me when it comes to philosophical questions, I lost interest almost as soon as the questions were asked.

On a much more mundane level, I wondered if I should have one more beer before waking Josh up and trying to get him out of here and also incidentally trying to get myself back at long last to what I still liked to consider the real world.

And then while I was just beginning to ponder this last question I found myself looking at Josh’s open pack of Pall Malls, still standing on the bar where he had left it, with his beautiful black enamel-and-gold Ronson standing up right next to it, back to front.

This would be a perfect time for a cigarette, if ever there were one.

Now it was true that I had only given up cigarettes the morning of the day before, but it was also true that to me at least if no one else that, as I had just said to Josh, yesterday morning felt like at least half-a-decade in the past. I couldn’t even remember at the moment most of what I had experienced since awakening the previous day with my usual dry hacking cough in my little attic room. No, the remembering would come later, when I finally found some quiet hours to sit with my marble copy books and my Bic pens, on my aunts’ front porch, or at the metal table under the shade of the oak tree out back, scribbling obliviously away, attempting to preserve these adventures, if only for myself, or for my sense of myself, as no one else will ever read these memoirs with the possible exception of a psychiatrist or some earnest student of mental illness.

One cigarette wouldn’t kill me.

But on the other hand, who cared what it said about my willpower, and so I reached over and picked up the pack and the lighter and set them down in front of me.

One cigarette, here while time was stopped in this black-and-white world, in which, now that I thought about it and took notice, immobile clouds of cigarette and cigar smoke gently marbled the atmosphere, and frozen streams of various shades of grey curved and swirled from the noses and mouths of my fellow inhabitants and from the cigarettes and cigars and pipes in their fingers or lips, or balanced in ashtrays.

But if I was going to have a cigarette I might as well have another beer.

One beer wouldn’t kill me either, at least not immediately. Like the cigarette it would probably have to be followed by who knew how many thousands more of its kind before contributing in its own small way to my demise, and after all I might just get accidentally run over by a trolley car first or fall victim to a stray ricochet in a gangland shoot-out, or I might get bitten by a rabid dog, or struck by lightning while swimming (as I admittedly sometimes did) in a thunderstorm. The only sure thing was that something was going to get me in the end, and just that grim certainty itself made the prospect of a cigarette and a beer all the more inviting.

With a cigarette and a beer I could relax for a few minutes, enjoy the silence, this silence tempered only by Josh’s gentle snoring. I could think things over, or, even better, just let my mind go blank if only for a short time. Then I could stub out my butt, put down my empty mug, breathe a satisfied sigh, and then give Josh’s shoulder a shove or two, whatever it took to wake him up and get the show on the road again. He wouldn’t even notice that I had smoked one of his cigarettes, and he wouldn’t know I had helped myself to another beer, either, so I could pretend that I had merely sat there, patiently giving him some time to sleep it off for a bit. It’s not every day that one gets the chance to appear morally superior to the son of God.

So I made my decision.

One cigarette, but only one, and one mug of draft Rheingold, and only one, and definitely no B&B, nor even my favorite cocktail, a Manhattan, even though no one was there to stop me from mixing one, and I could even use the good stuff if I wanted to, Four Roses, or Old Forester, instead of the Fleischmann’s or Carstairs I normally settled for.

I got up off my barstool. All I had to do was pick up my empty mug, walk down to the nearest end of the bar, lift up the wooden flap that I could see down there, go to the beer taps and help myself, thus realizing a fantasy which I suppose most drinking men have entertained at one time or another.

But Josh had sailed so easily over the bar, twice, that I guess I thought if he could do it, I could do it – forgetting that I still had a not completely recovered sore right knee, and forgetting the even more important fact that Josh was the son of God and that I was a mortal man – and so, instead of doing the sensible thing and going down to the end of the bar and getting behind it that way, no, I stepped back a couple of paces, took a breath, and attempted to vault over the counter, using my left hand as a fulcrum if that’s the word.

I remember my left foot getting caught on the edge of the bar, I remember my left hand slipping on something liquid, probably beer, I remember tumbling over the bar as if I had not leapt of my own volition but had rather been the victim of one of Haystacks Calhoun’s fearsome body throws, and after that came a burst of white light and then blackness and unconsciousness.

(Continued here, because someone’s got to do it.)

(Please turn to the right-hand column of this page to find an up-to-date listing of links to all other published chapters of Arnold Schnabel’s Railroad Train To Heaven©. Now appearing also in the Collingswood Patch™: “The voice of a small town with a collective soul as big as all the world.”)

If Arnold takes Josh's job, he'll have no need to refrain from smoking. Or disrobing. Or the Watusi. Or even drunkenness. Ultimately.

It's a dirty job, and I think it's best left to the experts...