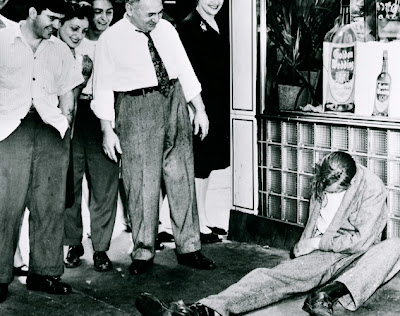 Our hero Arnold Schnabel, in attempting to vault the bar in the Little Caesar Room, has thus rendered himself unconscious...

(Please click here to read our preceding chapter; if you really can’t get enough of this nonsense then go here to return to the very beginning of this Gold View Award™-winning 69-volume memoir.)

“Arnold Schnabel – truly not just the greatest writer of his own time, but perhaps of any time and of any universe, real or imagined, or otherwise.” — Harold Bloom, in his “Books Are Not Just For Eggheads” column in Man’s Adventure Magazine.


Obviously the state of unconsciousness into which I had fallen was not a permanent one, or I would not now be inscribing these very words.

Was I unconscious for only a few moments, or was it for a few hours, or even centuries?

The question I suppose is basically meaningless, since Josh had stopped the flow of time anyway.

I’ll only say that after an unspecified period of oblivion I once again became aware of myself, but it was not simply an awareness of that self which currently lay sprawled on the rubber floor mat behind the bar of the Little Caesar Room.

That particular awareness was certainly there, but simultaneously I was aware of another self lying in a very similar position by the street window of Mr. Arbuthnot’s kitchen in Cape May, as well as the madman who, if not in his darkest hour then at least in one of his darkest hours, had been visited by the son of God himself, and I was also aware of that Arnold Schnabel who had traveled with my friend Dick Ridpath through a painting hanging on a stairway wall to a French seaside resort in the previous century, where I had met that young fellow Marcel Proust, and I was also that other version of me who had been struck by lightning and had then gone to the next world and to the mansion on the hill of the father of the son of God, where I had spent most of my time looking fruitlessly for a bathroom, but then I was sent back to the earth again, and I was the me who later that day had opened a door in Mrs. Biddle’s house only to find himself in the Philippines, in the 1930s, where I had inadvertently contributed to the demise of the young Mrs. Biddle’s husband Jimmy, and I was the Arnold who had met St. Thomas Becket, and the sub-devil Jack Scratch, and finally even the prince of darkness himself, with whom I was to do battle on some several occasions.

I was the Arnold Schnabel who had awoken one morning to find himself condemned by the aforementioned and vindictive prince of darkness to being a character in a tedious novel written by a woman of my acquaintance who was possibly even more mentally unstable than myself.

And I was the Arnold who, having managed (and not for the first time) to defeat the prince of darkness, had returned yet again to his own world and had then met a man who was a character from yet another novel, invading my nonfictional world, or at least the world I considered to be nonfictional.

I was the bold adventurer who had traveled once again into the world beyond in an attempt to bring a degenerate old man back from the dead, and who had somehow succeeded in doing so.

I was that Arnold Schnabel who had perhaps foolishly gone back to the universe of the aforementioned madwoman’s tedious novel in search of his friend the son of God, who now went by the name of Josh, and who had passed out in a bar in a 1930s movie, after he had halted time in its tracks.

Somehow none of this seemed confusing, at least to me it didn’t.

I was all these Arnolds, and many others.

I was even the rather sad and boring Arnold I had been for the first forty-two years of my life.

I felt that all I had to do was to will it and I could return to any of these incarnations of me, and to the time that at the time seemed to be the present time.

I had no idea, just as I had never known what was going to happen next in any of those billions of present moments in any of my lives, any of my incarnations.

But besides all these lives which I had lived, and which still were being lived in a universe in which the past was the present, I could also sense – as if just around the corner, on the next street, or maybe down a hallway or up a flight of stairs – the existence of myriads other Arnolds I had yet to encounter in who knew how many worlds, and all I had to do was to go down a stairwell, or hop on a bus, or open a door, and I might then inhabit any one of these other Arnolds in worlds as yet unknown to me, these future worlds which were as much a part of the present as the past was, and as much here as anywhere, and all I had to do was to will myself into one of these worlds and there I would be.

Or, I could remain where I was, floating somehow around and above and yet within all these selves and universes, just as Josh’s father was alleged to be everywhere at once.

Or should I return?

Return to which Arnold?

There were so many of them, at least a million that I knew of, at a rough estimate, and there might well be millions more.   And was it even up to me whether I returned or not?

It was Josh, squatting next to me, gently slapping my face.

“You’re lying on this wet dirty mat behind the bar here at the Little Caesar Room. Where did you think you were?”

“How does your head feel?”

He was touching what I now realized was a lump on the right side of my skull.

“What am I gonna do with you?”

“I was wondering the same thing about you,” I said.

“Touché,” he said. “Here, let me take care of that bump for you. A little laying-on-of-the-hands, you’ll be good as new, pal.”

“I don’t think it’s anything serious.”

“You just said it hurts.”

“I’m used to something hurting,” I said.

“I’m getting the feeling you just don’t want me to heal you.”

“Why in God’s name?” he said, which sounded funny coming from him of all people.

“I’m afraid an explanation would only become possible after at least a couple of months of psychiatric consultations,” I said.

The reader should know that I had remained lying on my back on that thick wet nubbly floor mat throughout all this conversation.

With that fluidity of movement and physical grace so typical of Josh, he took my left hand in his right hand and rose to his feet, pulling me to mine. I felt a warm bright energy flowing from his hand into my own hand as he did so, and I realized that this was a healing energy, I could feel it flowing up my arm and through my shoulder, up the back of my neck and into my skull directly to the bump on my head, and I could feel the bump tingling in a pleasant way, and the pain that had been emanating from it seemed to hiss away like air from a punctured bicycle tire into the smoky atmosphere of the bar.

That was Josh. He was a nice guy, but if he really wanted to do something he was going to do it, and that was about all there was to it.

(Continued here, because there’s no turning back now.)

(Kindly look to the right-hand column of this page to find what is meant to be a current listing of links to all other officially released chapters of Arnold Schnabel’s Railroad Train To Heaven©. Now published simultaneously in the Collingswood Patch™: “New Jersey’s last lonely voice of literacy and high culture.”)

This universe (and others) are sacred and cannot end.

Arnold couldn't have put it better himself.