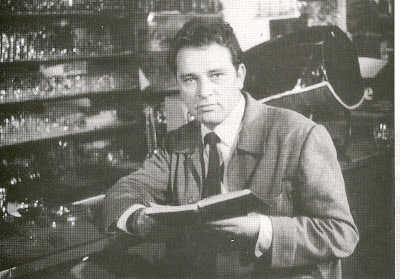 Your humble amanuensis was the victim this past week of a dual wisdom-tooth extraction, and subsequently spent several days in a drugged fog. Therefore we regret to report that there will be no new chapter this weekend of Arnold Schnabel’s sprawling memoir Railroad Train to Heaven™; however, as a sop to his millions of clamoring fans we present the third in our occasional series of short selections from the master’s work. We hope that this will help to prevent or at least lessen any deep sense of loss in our regular readers, and we promise that Arnold will be back next Friday night with a spanking brand new chapter for your edification.


I walked down the windy dark empty street to Congress and turned right, and down the block and a half to the VFW. It’s just a plain long building, dull and brown, it’s windows made out of filmy glass bricks like ice cubes. I opened the door and went in. The first thing I heard was Steve’s distinctive tenor, singing along to a song on the jukebox called “Be My Baby”. And there he was in the middle of the crowded bar, waving a beer mug in time to the music.


…I slowly recognized her as a pretty but somewhat somber face I had seen around town in past summers, each year a little taller and a lot more — what’s the word? Imperious? Or even like the way the Blessed Mother looks in some old paintings, beautiful and calm but somehow somewhat bored or even miffed about something.

By the way I just want to interpolate that if despite my present lamentable state of willy-nilly agnosticism there really is a Blessed Virgin I mean no disrespect by the above sentence or, now that I look at it again, should I say sentence fragment.


I felt like a ghost wandering through a carnival swarming with mad midgets.

Universes collapsed, stars exploded and disappeared, new galaxies burst into creation, gods and entire races lived and died as she went into her little kitchenette and took a bottle of Gordon’s gin and poured healthy drams into two of the Flintstones glasses that my aunts had supplied the apartment with. She came up to me and handed me one of the drinks.

I turned and walked out, closing the door behind me. I walked gingerly over to the bathroom, went in, closed the door, unzipped, and splashed cold water from the tap onto the offending portion of myself.


Their words passed into my ears and out again, leaving only the vaguest impressions on my brain.

Miss Rathbone sat down and poured Steve a glass of ice water.  He thanked her, lifted the glass and drank it all, his Adam’s apple palpitating like a small creature trapped in his throat.

I could never describe the complex of emotions, hidden but obvious, conversation, superficial but fraught with meaning, all of it somehow managing to be deeply boring but completely unmemorable, which ensued in the next three minutes of chatter among the old women and Miss Evans.

I said nothing. What could I say? It seems to me that for years I talked to people, and they talked to me, primarily in a sort of code composed almost entirely of clichés, a code whose purpose was not the transmission of meaning but the lack of meaning.


People were starting to come back from the beach, blistered-red, sweating and weary, looking as if they had been through a battle. Even the little children hobbled and staggered as though on a death march, or else were carried by their sandal-dragging parents or brave older siblings.


Real life always comes back to bring us down to planet earth even in the midst of our most exalted philosophizing, and so it was that I realized that I had to urinate.


I didn’t know what to say, which is not unusual for me of course. However, after many years of social doltishness, I’ve gradually realized that people are much more comfortable if you say something, anything other than saying a great resonant nothing…

Next thing I knew we were in a café drinking peppermint schnapps, and pretty soon after that I was being frog-marched into a brothel, gibbering with fright as if I were being dragged to the gibbet. And as terrified as I was going in I was even more terrified an hour later when I shuffled out, expecting a lightning bolt to strike me down at any moment and cast my wretched unshriven soul screaming hellward.

It occurred to me that I was happy.

(Please tune in next week when we will bring you a brand new and exciting chapter of Arnold Schnabel’s Railroad Train to Heaven© in its usual time-slot.)
Posted by Dan Leo at 3:10:00 AM

Harold Bloom is right. RRTTH is the kind of book(s) where every page includes a sparkler. And some: you want to memorize.