"The Young and the Damned" 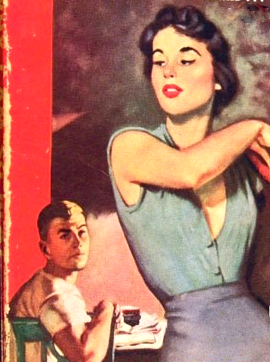 Ever since he was a mere stripling of eleven and had first delved into a twelve-year-old copy of The American Mercury at his local public library, Seymour Krabbe wanted nothing more out of life than to be what was known in those more innocent times as a “public intellectual”; and so it was, at the age of eighteen, carrying only his high school gym bag and a second-hand Remington portable typewriter in its case, he arrived on a Greyhound bus at the Port Authority Terminal in New York City. He had only twenty-three dollars in his Cub Scout wallet, saved up from his newspaper route, but Seymour figured this would easily last him until he sold his first article or perhaps a short story, or maybe an in-depth book review, or who knew, perhaps even a sonnet or a villanelle…

The Young and the Damned, by Horace P. Sternwall, a Gold Medal paperback original, 1954. (Republished as The Young and the Unfortunate, by “Harry P. Stockhausen”, Panther Books {UK}, 1955.)


(Kindly scroll down the right-hand side of this page to find a listing of links to the opening passages of many other curiously out-of-print works of the legendary Horace P. Sternwall.)
Posted by Dan Leo at 5:05:00 AM

Horace may be completely out-of-print, but who can say what influence he still wields?