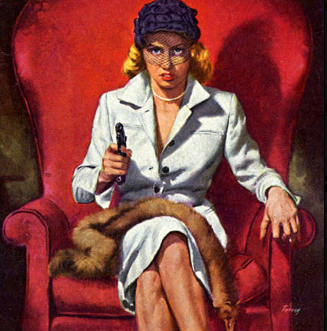 It was a long walk back from the Santa Anita racetrack to downtown Los Angeles. Every once in a while Ben Blagwell would stick his thumb out, but nobody stopped. What the hell, Ben wouldn’t have picked himself up either if he saw himself standing on the side of the road in his cheap Robert Hall suit, a big ginger bruiser who looked like he’d kill you just as soon as look at you. It was almost midnight by the time he got back to Bunker Hill, and all the lights in the rooming house were out, which was good – maybe he could avoid the landlady at least until morning. But someone was sitting on the porch glider up there in the dark. Ben started climbing the creaky wooden steps, hoping to hell that the someone wasn’t Mrs. McGrath, the mean old harridan. And then the someone struck a match, and lit a cigarette, and Ben stopped where he was at the head of the steps.

Maude. Maude Collins. Three thousand miles he had traveled to get away from this broad, and here she was.

And now I am in hell.