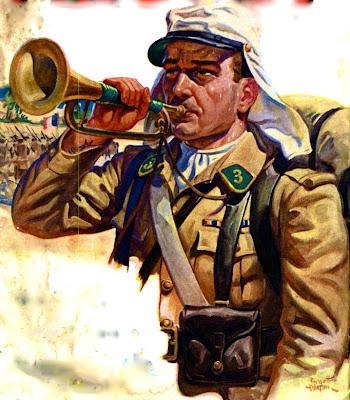 We last saw our hero Arnold Schnabel in a not very pleasant outhouse in a courtyard to the rear of a low dockside bar in Singapore…
(Kindly click here to read our previous episode; those who dare may go here to return to the very beginning of this Gold View Award©-winning 52-volume memoir.)
“Just when you think Arnold Schnabel can’t get anymore ‘wack’ (as the young people say), he calmly gets twice as ‘wack’.” -- Harold Bloom, on The Rachael Ray Show.
{Editor’s note: Unfortunately an entire sheet is missing from Arnold Schnabel’s marble-copybook holograph here, the only occurrence (so far) of such brutal self-editing in his massive oeuvre. We pick up his narrative at the top of the next page.}

...staggered out the door, and started weaving my way across the courtyard. I probably looked like a man who had just been shot, and all I wanted to do was to collapse like a shot man, and I would have done so if it weren’t for all the broken bottles and shards of glass underfoot. As it was, after what seemed like five minutes I made it to the back entrance of the bar, and turned and sat down on the upper of the two wooden steps there. And then, because the wood of the step was wet with God knows what, I got up again, and just stood there, sweating, still panting. Then I sat down on the step again. The seat of my trousers was already wet -- in fact all my clothes were soaked with sweat anyway -- so what difference did it make?

Above me the harsh barking and the shrieking of Ben and Maxine -- which had never ceased since shortly after I had first come out here -- now abruptly reached a crescendo, and then just as suddenly subsided, leaving only the noise from the jazz band inside and the drunken laughter and shouting of the patrons.

The Luger was digging into my side, so I pulled it out of my waistband and held it on my knee.

I tried to think, to review my situation.

If I was insane, if all this was imaginary, then there was probably nothing I could do to get me back to what I thought of as “my” world. But if all this around me (including myself) was “real”, or at least a version of “real”, then it stood to reason that if I had gotten here then I could leave here.

I’m not sure even now if this line of reasoning was logical, but nevertheless this was the way I was thinking.

By opening a cheap paperback novel, Say It With a .38, by Horace P. Sternwall, and reading, and thus somehow leaving the world I was in and becoming part of the world of the novel. But matters were complicated because I had picked up this novel in another fictional world, the world of Two Weeks in a One Horse Town, by -- what was his name -- I just had to go over my old copybooks and check -- Theophilus P. Thurgood. And, of course, the world in which I had picked up Thurgood’s book was also fictional, that of Ye Cannot Quench, by my old nemesis (one of my nemeses), Miss Gertrude Evans.

Therefore, summing up, it seemed that I had attained the power to enter various fictional universes merely by picking up a book and reading it. But how to return to my own and presumably non-fictional world? My previous long foray into Miss Evans’s fictional world (in which I had assumed the part of “Porter Walker, bohemian poet") had only ended after I defeated the prince of darkness through some trickery involving a magic fountain pen, and then, with the same pen, had taken a sheet of paper and written the following words (again, I’ve had to scrabble through my masses of old copybooks to find the sentence): And so Porter wrote the words that would take him back to his own self, to his own world. Then I had gone to bed and fallen asleep, to awaken, back in my former self and in my own body, in my army cot in the attic of my aunts’ house in Cape May, on a rainy Sunday morning in August of 1963, on a day that was still, in some senses, today.

So, it seemed to me that if I really wanted to get back home then why not try what had worked before, and write myself out of it? But there was one big problem with this plan. I didn’t have the magic pen. At least I was pretty sure I didn’t have the pen, but a quick pat-down of my various pockets assured me that indeed I didn’t have it. I didn’t even have the stub of a pencil. All I had was the sweat-soaked suit on my back, a dollar and change, and the Luger I held on my knee.

I lifted it up, and looked at it. It was heavy, warm and hard. I clicked the safety off. I had never fired a Luger. I had never fired any pistol except for one morning at Camp Wheeler back in 1943 when I emptied one clip of an army .45 in the direction of a target before handing the gun to the next guy in line.

I clicked the safety on again. Then I clicked it off. Supposedly there was a round in the chamber, indicated by the word GELADEN on the the left hand side of what I think is called the extractor.

I put my finger on the trigger, and then I put the muzzle of the gun to my temple, just under the brim of my hat.

I was a fictional character, apparently not even the main character of the novel I was in. If I killed myself I wouldn’t be killing me, I’d be killing the character. The novel would go on without me, just as real life goes on obliviously when any human being dies.

The music and the shouting and laughter continued in the bar behind me, and it would no doubt continue after I pulled the trigger. To my right I could hear the scrabbling of the rats in the trashcans. The rats didn’t care. To my left was the wall at which the hundreds of young Chinese men had been shot. The dead Chinese were beyond caring.

Ben would probably care. He was my friend, after all, even if he was only a fictional character as well. But he would get used to my death as time wore on. I would become another one of his stories. The crazy friend who shot himself. Crazy Arnie.

I pressed the pistol’s muzzle more firmly against my temple. If I were going to do this I wanted to do it right. I didn’t want merely to give myself a sloppy and painful frontal lobotomy, and become just another poor brain-damaged idiot begging on a street corner or spending the rest of his life in a poverty-ward hospital bed.

“Poor Arnie, couldn’t even shoot himself right. Now all the poor guy does is drool.”

So I would have to hold the gun very firmly against the side of my head. Maybe take a deep breath first and then hold it in before firing. My last breath, which unfortunately would be of this foul, thick, humid air.

But if I shot myself, who was to say that I would return to my own world? Maybe I would go to hell, the hell where fictional suicides are consigned to. It would just be another and possibly even more unpleasant world that I would need to escape from.

I took the gun away from my head. I sighed. I thumbed the safety catch back down to GESICHERT: safe.

I stood up, shoved the pistol back into my waistband.

I looked out at the dark filthy courtyard.

I breathed in the reeking warm air, which was, at least, less foul than the air in the outhouse.

A mosquito bit me on the knuckle. I didn’t bother trying to slap him.

I looked up past the surrounding buildings at the sky. It was like looking into a pool of motor oil, with the stars reflecting dimly off of it.

I buttoned one button of my suit jacket, then I buttoned the top two buttons of my shirt and tightened the knot of my tie. I took off my fedora, and pushed my wet hair back down on my head. Then I put the hat back on, turned around, went up the two wooden steps and back into the bar, to face the music, whatever that music would be.

(Continued here, and so on, until legally enjoined not to.)
(Please look to the right-hand column of this page for an up-to-date listing of links to all other presently-available chapters of Arnold Schnabel’s Railroad Train To Heaven©, a Danny Thomas Production for Quinn Martin. Coming soon from the Olney Community College Press: I Know That I Don’t Know: Words of Wisdom From Arnold Schnabel, edited by Dan Leo, available exclusively at Kresge’s 5&10 stores, nationwide and in Canada.)

Good thing Arnold's curiosity didn't get the best of him.

"There's the respect
That makes Calamity of so long life."

Shooting himself in the head is just so not Arnold. But on the other hand, jumping off a cliff...

No matter what layer of unreality consumes Arnold, he slowly grows and becomes minimally freer (although that 'freer' may be adding my bias into the text.)
Of this, I'm certain--his soul remains his pure and unchangeable.