"Big Gun for a Little Lady" 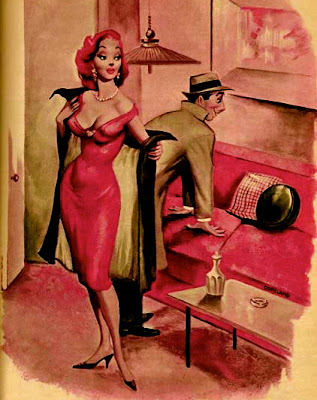 “Hey, buddy,” said the dame sitting to Ben Blagwell’s right. “You wanta do me a favor?”

She was a redhead, but not with orange hair like a normal redhead. Her hair really was red, just like her dress.

She didn’t wait for Ben to say anything, but she opened up the sparkly red purse on her lap and brought out a .45 automatic, locked and cocked.

Ben took the gun out of her hand and held it on his thigh.

“Pretty big gun for a little lady,” he said.

“Sometimes a little lady needs a big gun,” she said. “Now put that thing away and let me buy you a drink.”

Big Gun For a Little Lady, by Horace P. Sternwall, a Ballantine paperback original, 1955. (Originally serialized in abridged form as "Little Lady With a Large Gun" in Savage Tales for Men, August and October, 1954.)

(Kindly scroll down the right-hand column of this page to find a listing of links to the opening passages of many other inexplicably out-of-print novels by the legendary Horace P. Sternwall, "The people's novelist.")
Posted by Dan Leo at 6:25:00 AM