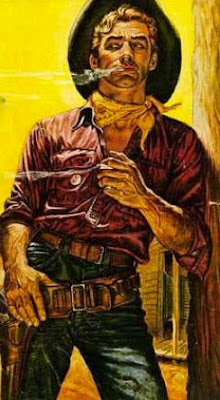 “Any last words, pardner, ‘fore we whup this horse you stole out from under ya and send ya down to the fiery pits o’ hell?”

“Last words? Why, no,” I said. “Not really. I admit it, I stole this handsome palomino, and I know that’s a hanging offense here in the fine territory of New Mexico.”

“Okay,” said the big man, and he raised his riding crop.

“Not in the least,” said the man, and he raised the crop higher.

“What if I told you that I was trying to make my getaway from robbing the Yuma train out in Arizona.”

“Ain’t no business of ourn what you done in Arizona.”

“How much loot we talkin’ about here?” he asked.

“Forty-two thousand,” I repeated. “In gold.”


What a bunch of greedy saps. I left them behind that very same night, and this time I took an even better horse, a pretty roan mare I named Polly.

Talk to the Six-Gun! by Horace P. Sternwall; an E-Z Original, paperback, 1955; serialized in abridged form in Savage Adventures for Men, Oct. to Dec. 1957, as I’ll Let My Six-Gun Do the Talking! by “Howard P. Stone”.

(Scroll down the right-hand column of this page to find a listing of links to the opening passages of some other fine but sadly out-of-print novels by Horace P. Sternwall.)
Posted by Dan Leo at 11:30:00 PM

Heh heh, thanks, Jason. There should be another one in a matter of days -- out art department is busy now restoring the cover art...

My father used to sing a song about a "strawberry roan." He may still, but not in public.