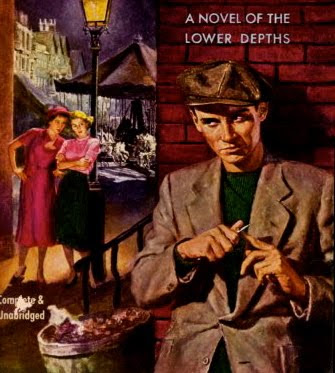 August, 1963: a rainy Sunday noon in the quaint seaside town of Cape May, New Jersey, and our memoirist Arnold Schnabel has just completed a mysterious transaction at Wally’s cigar shop and pool room...

(Go here to read our immediately preceding chapter; advanced students of abnormal psychology may click here to return to the beginning of this Gold View Award™-winning 73-volume autobiography.)

I took the quarter and the tin canister and put them both in my trousers pocket. Please don’t ask me why I took the tin...Oh, hold on, I know why, I took it because it was easier than not taking it. Why make an enemy of Wally? This was a small town. The last thing I needed was another enemy, another person to avoid at all costs. So I put the tin in my pocket with the quarter, said good day to Wally, and Kevin and I left the shop.

“Open my umbrella for me, Cousin Arnold. I don’t want to take a chance on dropping any of my comics.”

The rain had continued to fall, it drummed down on the awning over our heads as the wooden Indian stared at man and boy with disdain.

I gave Kevin my umbrella to hold while I took his, and, after only a minute or so, I got it open. I handed it back to him and he handed me my umbrella.

And without another word he hurried off, a small boy under a black umbrella in the pouring rain, holding his comics tightly under one arm.

I did my best to ignore the wooden Indian’s gaze as I unfastened and opened my own umbrella, and then I set off toward the church, crossing Decatur Street, making my way up the block.

I suddenly realized that I was approaching Mr. Arbuthnot’s Whatnot Shoppe.

I stopped dead, standing there under my umbrella in front of Dellas’s 5&10.

Unfortunately for me in order to get to the church I would have to pass directly in front of Mr. Arbuthnot’s shop.

I considered turning back, making a right on Decatur and then going the long way around on Lyle Lane to approach the church from the rear. But this laborious flanking movement would make me even later than I undoubtedly already was. Then I thought that maybe I should just jaywalk across the street and quickly walk up Washington on the other side, then cross back at the Ocean Street corner. I was about to attempt this maneuver when a police car came down the street, slowly. The car stopped. The policeman at the wheel leaned over the passenger seat and yelled though the partially closed window.

“Sure, officer,” I said, leaning down toward him.

No surprise, this was the same cop who had come upon me talking to an invisible-to-him Jesus the other night.

“Why you just standing there you don’t mind my asking.”

We were both practically shouting through the noise of the rain and the wind.

“Okay,” said the cop. “But why are you just standing there? In the rain.”

“Yes,” I said. I was still bending down awkwardly under my umbrella so that I could look into the car. “You know,” I said, “I usually like to give at least a quarter. Heh heh. Just so the usher won’t stand there rattling the collection basket under my nose. Heh heh. Not that I ever did that. When I was an usher.”

“You were a church usher.”

“Really. How many years.”

“I’m surprised to hear that.”

“Yeah, ‘cause I know, you know, you gotta pass them tests and all. You know.”

“So, getting back to why you were standing here.”

“Did you remember to bring a quarter.”

“Oh,” I said. “Uh.” I moved my umbrella from my right hand to my left, and put my right hand into my trousers pocket. I brought out a quarter and the little tin canister that Wally had given me, and showed them to the officer. “Yep,” I said, “got a quarter.”

“What’s that other thing.”

This was a bald-faced lie. I never get headaches. I get hungover a lot, sure, but I don’t get headaches. Cops in the novels I read always seem to know when people are lying. I only hoped that the physical distance between this cop and me, and the pouring rain, would make my duplicity less obvious than it would have been had we been standing face to face on a fine clear day.

The policeman stared at me as these thoughts lumbered through my brain.

“Nephew of the Schneider sisters, over on North Street.”

Trying to look casual, I put the quarter and the tin back into my pocket.

“Wish I could take a whole summer off.”

I said nothing to this.

The cop stared at me, through the rain.

Was he finished with me?

The floodgates were open now. I should have given him only my name, rank and serial number.

I had him there.

Or maybe he had me.

“It’s my neighborhood newspaper, back in Olney.”

“It’s a neighborhood, in Philadelphia.”

“And this paper publishes your poems?”

“Yes. They’ve published one of my poems every week since I was eighteen.”

“So they must be good your poems.”

“Yeah, me neither really,” I said.

The cop stared at me.

And then I said nothing, and the policeman continued to stare at me.

And I started to straighten up.

I bent down and forward again.

“I mean mentally you don’t mind my asking.”

He paused. Another car had stopped behind him. The cop turned and waved to the driver to go around him and the driver did.

The policeman leaned over toward me again.

He looked at me again and then pulled out, slowly, very slowly.

I couldn’t very well jaywalk now, the cop was probably watching my every move through his rearview mirror, ready to make a screeching U-turn at the slightest sign of irregularity on my part, so I resumed my progress along the pavement, being careful not to break out into the Watusi or a spirited cakewalk or any other form of capering or leaping about which might attract unwanted attention. And it now dawned on me that I had not intended to go to mass at all, that I had meant to visit Elektra, and I also remembered that I was two hours late for my meeting with Larry Winchester. But, again, if I turned back, the cop might see me. More questions would be asked. More lies would be told. I might even be hauled in for further grilling as a dubious character seen limping and loitering with suspicious intent. I continued walking, or limping, and as I approached Mr. Arbuthnot’s shop I quickened my pace to a hobbling double-time march, all the while keeping my eyes to that sidewalk all splattered and streaming with rain...

I stopped. I was directly in front of the entrance to Arbuthnot’s shop, and there in the open doorway he stood, smiling, and smoking his little Meerschaum pipe.

(Continued here, and indefinitely, in accordance with my plea-bargaining agreement.)

(Please look to the right hand column of this page to find an up-to-date listing of links to all other legally-available chapters of Arnold Schnabel’s Railroad Train To Heaven©. This week’s episode brought to you by Uneeda™ crackers. “Feeling the economic pinch? Try Uneeda™ crackers with just a smear of margarine and a sprinkling of sugar for breakfast -- the kids will love it!”)

A downpour, an obnoxious and threatening cop (all cops to my mind are threatening), a missed date with Elektra--and Larry Winchester...
Possibly, implacable Arnold takes all that in stride. BUT Mr. Arbuthnot?
Twice lately I've been described as gasoline relative to fire. Mr. Arbuthnot is all-out conflagration.