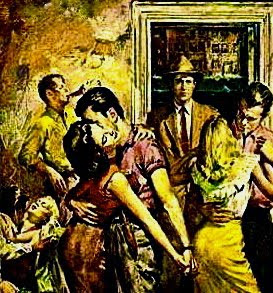 After another hard day in the city Mr. Peter Willoughby pulled his sensible grey sedan into the garage of his suburban splitlevel home, and he considered his choices: either duct-tape one end of the garden hose to the exhaust-pipe of his car and secure the other end through the driver’s-side window and put an end to his unhappy life, or turn off the ignition and go inside and eat his dinner. It was Thursday, and that meant Chicken à la King.

In fact Peter was famished – because of that extra work on the Throckmorton account he had only had a vending-machine cheese sandwich for lunch – and so, with a sigh, he decided on the Chicken à la King.


A Desperate Man, by Horace P. Sternwall; an “Ace Double” paperback original, published in tandem with Housewife From Hell, by Helen P. Stevens (believed to be a nom de plume for Sternwall), 1953.

(Scroll down the right-hand column of this page to find a listing of links to the opening passages of some other fine but sadly out-of-print novels by Horace P. Sternwall.)
Posted by Dan Leo at 11:17:00 PM

There's more in the pipeline, Di.

Our lawyers are working on clearing the rights...