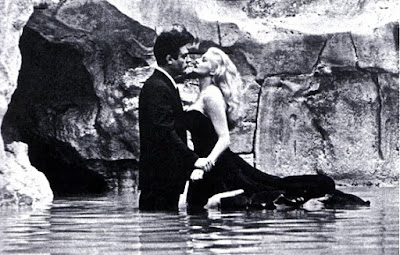 The Devil has transported our hero Arnold Schnabel into the pages of a novel called Ye Cannot Quench, a now-forgotten potboiler recounting a young woman’s adventures upon moving from West Virginia to the New York City of the mid-1950s...
Let us now rejoin Arnold (in the guise of his character, “Porter Walker”, romantic bohemian poet) at lunch in the Oak Room of the Algonquin Hotel, with our heroine Emily and her boss, the handsome young publisher Julian Smythe, with whom Arnold (sorry, “Porter”) has just closed a deal for the publication of his epic bohemian poem, The Brawny Embraces...
(Go here to read our preceding chapter; click here to return to the first chapter of this Gold View Award™-winning memoir.)

As I dipped the shrimp into the cocktail sauce and proceeded to swallow the thing with only the most rudimentary chewing I heard another swell of orchestral music, and I suspected that we were entering one of those sections of the story in which my presence was to be dispensed with.
I could feel myself dissolving away like an image on a movie screen.
I fought back.
I bit my lower lip, I breathed in deeply through my nose, I concentrated on the here-ness and the now-ness of where and when I was, in all its black-and-white immediacy.

“Lunch was splendid,” I heard Miss Evans’s magisterial voice from above, it sounded now like the voice of the Blessed Mother in The Song of Bernadette, “and fortunately Porter behaved himself for the rest of the --”

That’s where I would foil her.
“What does it mean?” I nearly shouted.
“I beg your pardon?” said Julian, holding the shell of a clam casino poised before his mouth.
“What does any of this mean?” I asked.
“What?” he said. “You mean what does lunch mean? Or just appetizers?”
“Porter,” said Emily, “don’t be a weirdo.”
“It’s all right, Emily,” said Julian. “Porter’s a poet after all.”
“What does any of this mean?” I asked. “This existence. This whole life. This planet.”
“I haven’t the faintest notion what any of it means,” said Julian. With a little cocktail fork he slid the clam and its thick hat of bacon into his mouth and chewed. “Personally I just live day to day.”
I heard Miss Evans’s heavenly voice rewrite herself in mid-sentence:

“ -- that is to say Porter behaved himself at least until after he had devoured his first shrimp.”

“Emily began to feel ever so slightly left out,” said Miss Evans from on high. “The two men -- intense young poet and devil-may-care young titan of publishing -- seemed to be about to bond with each other in a way she, a mere woman, never could. With either of them. She felt the tears well up in her grey eyes.”

Suddenly Emily pushed her chair back, grabbed her purse, and stood up.
Both Julian and I half-rose, but she waved us back down.
“I simply must powder my nose. Please, enjoy your wine, gentlemen.”
Off she went. I couldn’t be sure, but I think she may have been in a huff.
Maxie had gotten the cork out of the bottle, and now he poured a small amount into a glass he had placed in front of Julian.
“Oh, please, pour away, Maxie, and fill up my friend’s glass too.”
Maxie did this, then he put the bottle down and proceeded to open the other bottle, a red wine.
“Try your wine, Porter,” said Julian.
I tasted it, Julian watching me.
“What do you think?”
“Not bad,” I said.
Julian smiled and tasted his wine.
“Not bad at all,” he said. He leaned forward a bit towards me.
“Would you like me to decant the Pétrus, Mr. Smythe?” said Maxie.
“No, just leave it, thanks, Maxie,” said Julian.
Maxie put the bottle down and went away. Julian leaned a little closer, tapped his cigarette ash into the ashtray, some of the ash got onto the table cloth.
His lips started to move but his voice was drowned out by Miss Evans’s narration:

“In the ladies’ room Emily locked herself into a stall, sat down, took from her purse the lace handkerchief her grandmother had embroidered for her, and proceeded to burst into bitter tears.”

So, I had succeeded in continuing to exist even though the main narrative had moved elsewhere, and so had Julian. This was a triumph. Now I only had to get rid of that annoying voice from above.
“I’m sorry, Julian,” I said. “My mind wandered. What did you say?”

(Continued here, no one knows why.)
(Please look to the right hand side of this page for an often-current list of links to all other published chapters of Arnold Schnabel’s Railroad Train To Heaven©. “A book for all seasons.” -- Harold Bloom, on Oprah.)
Posted by Dan Leo at 3:35:00 AM

Farewell, J.D., blessings up and honor, mon. Arnold's got the baton.

The passage, that was the scary part, and the passage into the nothingness...

It's funny, 'cause Arnold is at least on the fringes of J.D. territory here...

Nothing to keep a panic attack at bay like some great shrimp cocktail and fine wine.
That said, I'm getting a little worried about Arnold's mental state. I think he's well into J.D. territory.

I know what you mean, Manny. If Holden walks in (dragged in by his goddam parents and some of their goddam phony friends) even I'm gonna get scared.

Was Julian also kicking against the conventional constraints of Miss Evans’s novel?

I have the feeling I'll never read a book the same way again... now wondering if the characters in it are struggling for as much control of the direction as the author.

Maybe that's why some people innately feel the need to read the last page first. Perhaps it locks down the story, preventing it from changing while we've set the book down, off to work on other things.

Dean, I dig. Time means nothing to Arnold.

Jen, your comment caused my mind to bend in a not unenjoyable way, or perhaps it was just the cold pills. I began to think of a possible book which would have a different plot for each reader who opened it. Maybe Jorge Luis Borges already wrote this book. At any rate, thank Josh that Arnold's opus is a memoir, and thus his characters have no chance of usurping his auctorial authority.