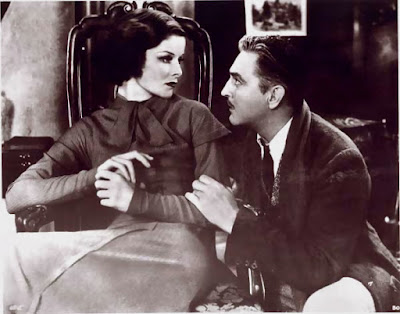 “Lifts the lid on the simmering stew of sin and skullduggery that is today’s film industry.” -- J.J. Hunsecker, in The Catholic Standard & Times.

Let us rejoin Buddy Best as he walks with his daughter Liz on a warm spring evening in Hollywood. They have just come within sight of his Depression-era Mission/Tudor house on North Ivar Avenue...

(Click here to go to our previous episode, newcomers may go here to return to the first chapter of Uncle Buddy’s House©, patent pending.)

As they were coming back on foot from the video store Buddy saw the light on up in Deirdre’s window.


He knocked on the door and said it was him, and Deirdre called out for him to come in. She was propped up in the bed with a French textbook. She looked at him, then she threw the book onto the floor and started to cry.

Buddy walked over and sat down on the bed. He patted her knee. She kept crying. After a while he stopped patting her knee.

Finally he said, “Well, look, give it a try. If you really don’t like it maybe your mom will let you move back here.”

She sobbed and said, “I know I won’t like it. So why do I have to go in the first place?”

“Who gives a shit? And that guy is weird.”

She went back to sobbing.

“Did you tell her you didn’t want to?”

“Of course I did,” she said, still crying but not sobbing so much now. “Repeatedly I told her.”

Buddy realized there was a box of Puffs on her bed table, so he reached over and put the box on her lap.

Deirdre grabbed a handful of Puffs and wiped her face.

“Oh, mostly he just looked solemn and concerned.” She wiped her eyes and blew her nose. She threw the wet Puffs onto the floor. “She asked me why I wanted to hurt her. And then she said I couldn’t stay with you anyway because you were sick, because you were fooling around with his daughter.”

“’Cause I said to her so what if you are -- that it was your business and Cordelia’s business.”

They were both quiet for a bit.

“She said that legally you’d never be able to keep me.”

He got up, went over and picked up her French text, came back, sat down, and laid the book next to her.

“Look, give it a shot. If it’s completely unbearable --”

“It will be, I know it will. I could maybe, maybe maybe maybe live with just her, but I cannot live with her and that weirdo. No way. I swear I’ll run away, Uncle Bud. I’ll become a prostitute.”

“Look, drama princess, be quiet a minute. Look at your French book.” Buddy put the book on her lap. She opened it up. “When are you supposed to move in there?”

“All right. Just let me think some more. Study.”

She studied. Or at least she tried to, or pretended to.

After a minute or so he said, “All right, I’m gonna make a phone call in my room. Study your verbs or whatever, and I’ll check back in.”


Actually it took about forty-five minutes, interrupted only once by Liz coming up and asking what the hell was going on.

He went back to Deirdre’s room, knocked, and she said come in. She was in her pajamas now, in bed under the covers reading a paperback of A Tale of Two Cities. He sat down on the side of the bed again and she laid the book down. He picked it up.

“I had to read this in high school too. How d’ya like it?”

He put the book down.

“I talked to your mom, I talked to Stephen too, and you can stay here.”

She shrieked and got up on her knees and hugged him. She said “Oh my God” a lot.

“But dig,” said Buddy. “She wants you to go over there on weekends, starting tomorrow, and, like, stay over Saturday nights --”

“-- stay over Saturday nights, at least.”

“No way. I’ll visit on weekends but I am not staying in that creepo house over night.”

“Yes I saw it, they took me to see it as if I would be impressed or something. And big deal if it’s on the beach, the beach sucks.”

“Okay, well, look, sleeping over one night a week is not gonna kill you.”

“Fuck that, that creep will probably come in my room and fucking jerk off on me.”

“Look, one night a week, just lock your damned door for Christ’s sake.”

“What if he breaks it down with a hatchet?”

“Fuckin’ -- look, she’s just trying to make a point. Give it a couple weeks and she’ll probably forget all about it. I mean, I really doubt she gives that much of a shit whether you sleep over one God-damned --”

“She doesn’t give a shit about me at all. It’s all about fucking her.”

“All right. Tell you what. Work it out with your mother. All right? But you do the fucking negotiating from now on because frankly I’m sick of talking to the both of them.”

“But wait,” said Deirdre, “dude, what did you say to them? To Mom and the Mariner?”

“No way that would’ve worked with her. What did you really say?”

“Okay.” She fell back and pulled the covers up. “I feel like I’ve gotten a reprieve from the governor.”

“Cool. You want me to get the light?”

“No, I think I’ll read this queer book for a while.”


Buddy went downstairs to the kitchen, fixed a Wild Turkey on the rocks without a splash, and then went into the living room. Philip was home, and he and Liz were in the middle of Psycho II.

Liz picked up the remote and hit pause.

(Please refer to the right hand column of this page to find what could very well be a current listing of links to all cybernetically-available episodes of Uncle Buddy’s House™, offer void where prohibited by moral umbrage.)

Larry's dialogue is always so well paced, it can feel addictive. Beyond that, though, the characters' voices are unmistakable.

Good old Buddy comes through again for the young 'uns!

Hope he didn't have to sacrifice too much.

Deirdre the typically ungrateful teenager, and Buddy totally gets that.

And yeah, really well paced, and I'm *dying* of suspense to know what Buddy did to change his wife's mind.

Thanks, Kathleen and Di. All will be revealed in future episodes!

I like the way Buddy calls the Mariner "Stephen" when he's talking to Deirdre.

realised when i woke up this morning, the scene when Buddy leaves Deirdre and talks on the phone in private, and we don't know what he says...and then he returns rather heavy hearted- it reminds me of the scene in "the Lion, the Witch and the Wardrobe" where Aslan and the Evil Queen make a bargain out of earshot of the children.
I'm talking about the book, not the film. I don't remember how they did the scene in the film.

Dianne, I'm embarrassed to say I never read "The Lion...", although I did see at least some of the movie (it was Christmastime, I was "watching" it in a crowded house and having it "explained" to me by seven-year-old nephew who apparently already had the movie memorized)...