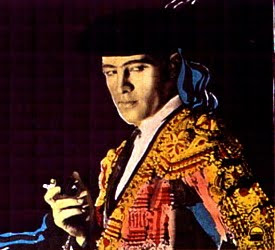 The bad news for our memoirist Arnold Schnabel is that his nemesis the Devil (AKA “Mr. Lucky”) has transported Arnold into a now-obscure novel of 1950s New York (Ye Cannot Quench by Gertrude Evans, author of numerous other steamy potboilers such as Fear Not The Dragon; Swiftly To The Dawn; As The Curtain Falls; Two Days and Two Nights in Marrakesh; Love But The Stranger).

The good news is that Arnold (or his “character” the romantic poet Porter Walker, and with the help of the novel’s plucky heroine Emily) has just closed a deal for his new epic with the dashing young publisher Julian Smythe...

(Click here to review our previous chapter, or go here to return to the very first chapter of this Gold View Award™-winning masterpiece.)

Arnold Stang came over just then with a tray and the fresh round of drinks. He laid Emily’s and Julian’s drinks down, and Julian picked up his martini.

“Porter, may I propose a toast. To your book: may it garner a swell review from Orville Prescott, and may it be chosen for the Book of The Month Club.”

Arnold Stang reached around me and filled my glass with Pilsener. He smelled of sweat, and despair.

“To Porter’s book,” said Emily, raising her Old Fashioned. “To his wonderful poem, the bra, knee and braces!”

“It’s the title of your poem!”

“Where’d you get that title anyway?” asked Julian, seeming not so much interested as trying to be polite.

“Oh,” I shot back, always one for the clever rejoinder.

“The Brawny Embraces,” he said.

“He got it from Walt Whitman,” said Emily. “How does it go, Porter?”

“Well, uh, let’s see --” I said, stalling. One never knew, an atom bomb might fall the next second and then I’d be off the hook.

She stared at Julian.

“Well, shall we order then?” said Julian.

He raised his hand and Arnold Stang was right there, pad and pencil at the ready.

After a firm interrogation of Stang (and with brief consultations with Emily and me) Julian ordered our food for us, and then as Arnold Stang hustled off I could have sworn I heard a wave of background music, like in a movie, some sweeping orchestral assault, and then I heard the unmistakable voice of Miss Evans herself, speaking as if from the heavens in her Katharine Hepburn voice.

“Emily cast stolen glances over her drink and through the redolent cigarette smoke at both Walker, strangely triumphant in his contract negotiations, and at Julian, radiating power as always but now strangely vulnerable in a way she could not quite define to herself. Was it that he, now that he was not in the offices of Smythe & Son, but in a hotel restaurant, seemed not so much the dashing son of the firm’s owner but just another perhaps too-handsome young fellow, perhaps all too aware of his possible inadequacies?”

While the above narration was being spoken Julian’s lips were moving, but I couldn’t hear a word he said.

This was a bit much.

I decided I must fight back. I must assert myself and fight against Miss Evans’s characterization and her plot line.

I could start by attempting to override her narration.

“May I interrupt for just a moment,” I said.

“No, it’s perfectly all right,” said Julian. “I suppose I was going on a bit. You’re probably not even interested in cars anyway, are you, Porter?”

“I suppose you don’t even have a car.”

Somehow I doubted it.

“Ah, but soon, old man, as soon as you cash that check! Get yourself a nice used Jag XK120 or something --”

“No interest in bumming around the country, the highways and byways?”

“Really?” said Julian. He clicked open his cigarette case and offered it to Emily, who had let her cigarette burn out in the ashtray. She took another.

“Yes,” said Emily. “He’s hitch-hiked all over the country, and ridden the rails.”

“Rode the rails,” said Julian. He took out a cigarette for himself. “You mean like in the movies?”

“Yes,” said Emily. “And he worked as a dishwasher, a lumberjack, a cotton-picker.”

“No kidding,” said Julian, forgetting to offer me a cigarette, but perhaps it was just as well. “That’ll make excellent jacket-copy.”

He lit Emily’s cigarette with his gold- or silver-plated lighter.

“Porter was also a bullfighter in Mexico.”

“And a gaucho in Argentina.”

He lit his own cigarette.

“Those are the sort of cowboy fellows, right?”

“Yes. He also sailed all over the world in a tramp steamer.”

I confess I was just about to reach into his still-open cigarette case and help myself to one, but Julian idly closed it up and slipped it into his jacket pocket.

“And he went up into the Himalayas and studied at the feet of a yogi,” said Emily.

“Terrific,” said Julian, gazing around at the restaurant, probably hoping to find a writer without such a romantic personal history.

“I look forward to reading it,” said Julian. “So, Porter, what was it you were going to say?”

I drew a blank, a complete blank. I had nothing prepared, not a thing in mind.

But now I felt guilty, both for interrupting him while he was apparently happily talking about cars, and for myself having such an interesting past.

“Well, I’m glad, Porter. That’s nice of you to say that. Even if you do drive a hard bargain.”

“Yes, an advance. You can skip that.”

Suddenly I remembered that I didn’t have a job.

“Well, uh, maybe just a small stipend,” I said, improvising. “Just till the book starts making money. If it makes any money.”

“You are indeed a strange fellow, Porter. Tell me, what do you think a fair stipend would be?”

“Fifty dollars a month,” said Emily, who knew a lot more about me than I did.

“Fifty a month,” said Julian. “Not bad for this town. All right, how about if we let you have fifty a week for, say, the next three months, just till the royalties start streaming in.”

“That should be fine,” I said.

“And this stipend will be against your royalties of course.”

“Well, all right then,” said Julian. Then, “What? You look as if something else is on your mind.”

“I wonder if I could have it in cash?” I asked. I was concerned, because it had just occurred to me that I probably didn’t have a bank account.

“Sure, Porter. Just roll by the offices every Friday after four and the cashier will take care of you.”

“Good. Deal. Let’s shake on it before you change your mind again.”

We shook on it.

“Now you can concentrate on your writing, Porter,” said Emily.

Right, I thought. But what I really intended to concentrate on was getting out of all this. I was already missing my old life. I never knew I had it so good. And I missed Elektra. I hoped she wasn’t waiting for me, wondering where I was.

“Emily gazed through half-lowered lashes at Porter,” said Miss Evans’s voice from on high. “Such a mercurial fellow! But she wondered, would success spoil him? Would the moody passionate poet grow fat and complacent?”

Fortunately, Arnold Stang arrived with appetizers for the table just then: a shrimp cocktail, oysters Rockefeller, and clams casino.

I grabbed a shrimp and tried not to listen to Miss Evans’s narration.

(Continued here, and, at this rate, for at least seventeen more years.)

(Kindly go to the right hand column of this page for a scrupulously current listing of links to all other available chapters of Arnold Schnabel’s Railroad Train To Heaven©. “Probably the greatest memoir in the English language since Erroll Flynn’s My Wicked, Wicked Ways” -- Harold Bloom, in The Christian Science Monitor.)

I suppose anything can happen now. But aren't there convoluted rules of physics, which if called upon, prevent time from affecting parallel universes?
Or are they similar to those equations that were supposed to back financial derivatives?
Obviously, money was different in Gertrude's novel: Everyone's assuming Arnold/Porter's poetry will make him rich.

Kathleen, all I know is I want that fifty-dollar a month East Village apartment!

I suspect this moody passionate poet will never grow fat and complacent.